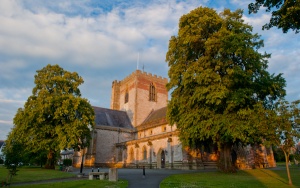 The Norman English did not rely solely on military might to subdue the Welsh. They also used religion; they realised that the aims of the Church of Rome were compatible with their own.

The papacy in Rome wanted to achieve uniformity of faith throughout the Christian world - a uniformity under its own control. The Normans, perhaps not cynically - or not completely cynically - supported those aims.

The Normans vigorously encouraged monastic settlements in Wales. The rigid faith of the early Benedictine monks was a perfect foil to what the Normans saw as Welsh deviation from the Christian faith as they knew it. Although the Welsh had followed the Roman lead in observing Easter since 768, in other matters of faith they were unacceptably independent.

By 1150 the Benedictines had established 17 priories and cells in Wales, most as daughter houses of larger French or English monasteries. At the same time, other monastic orders established new houses in Wales with Norman support.

In addition, the Augustinian order established priories (for priests, not monks, as the Benedictines did). Many of the existing Celtic "clasau", or abbeys, were converted to parish churches, while others became possessions of English monasteries.

Some of the early bishops appointed by Canterbury were interesting characters. Bishop Urban of Glamorgan (1107-34) rebuilt the church at Llandaf into a cathedral worthy of holding his bishop's seat. He reorganised his diocese along Roman lines and claimed lands between the Tywi and the Wye.

He made the more outlandish claim that his bishopric was the natural successor of Dyfrig and Teilo. He had Dyfrig's bones carried to Llandaf from Bardsey Island to join the remains of Teilo (one of three competing sets of the saint's bones!) that he already possessed.

Under Urban the Book of Llandaf was written, a remarkable collection of charters, biographies, and other documents purporting to show that the diocese of Llandaf had a proud history - and a very large territory. The veracity of the Book of Llandaf must be called into question - certainly the Bishops of St. David's questioned it, and refused to cede more territory to the acquisitive Urban.

One of those Bishops of St. David's was Bernard (1115-48), who owed his appointment to Henry I. He paid homage directly to Henry for the lands of the diocese and swore an oath of allegiance to the Archbishop of Canterbury. This act would later come back to haunt him and undermine his greatest ambition.

Bernard rebuilt St. David's as a Romanesque cathedral, and did much to popularise David among the Normans outside Wales. He campaigned for David's canonisation, which was granted sometime around 1123.

Bernard also made his bid for pre-eminence among Welsh bishops through David. He claimed that the saint had been an archbishop (un unlikely claim), and therefore he, Bernard, should be made an archbishop too, with precedence over the other Welsh church leaders. He argued that Wales was a separate nation, and should be granted its own archbishopric.

After much lobbying, the claim was refused by the pope on the grounds that Bernard had sworn the oath of allegiance to the archbishop of Canterbury, therefore he could not be an archbishop of a separate country.

The diocese of Bangor was filled in 1120 by a Welshman named David the Scot (!), who also swore allegiance to Canterbury. In 1143 a fourth diocese was created in Wales, at St. Asaph, also under Canterbury's control. 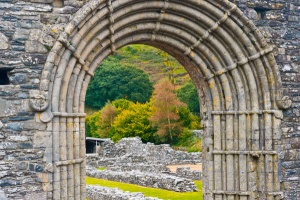 Monastic Orders
The early monastic orders had been used by the Normans to establish control over the Welsh church. But now the Welsh would use the same methods to enhance their own growing sense of national identity. The vehicle for this transformation was the Cistercian order.

The first Cistercian house in Wales was established under Norman patronage at Whitland in 1140. The second was Strata Florida, a daughter house to Whitland, established in 1164. After this inauspicious start, a succession of Welsh rulers encouraged Cistercian houses throughout their territories.

There were several reasons for this; the Cistercians owed direct allegiance to the head of their order, who was located in Citeaux, Burgundy, outside English control. The Cistercians also sought out isolated places for their monasteries, preferring the simplicity of life away from the corridors of power. In this, they followed the heritage of the early Celtic Church in Wales.

Yet for all their emphasis on simplicity, the Cistercians needed land for farming and land for raising sheep. It has been claimed the these "White Monks" were responsible for the birth of the Welsh woollen industry.