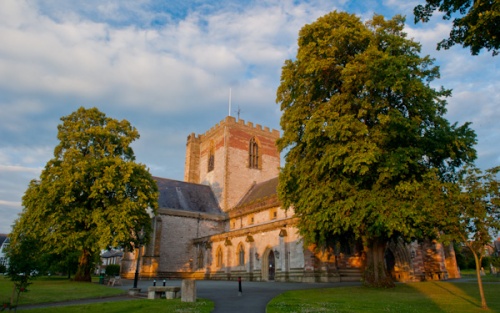 In the 6th century, the Scottish missionary Kentigern settled briefly in a ridge between the rivers Elwy and Clwyd. Kentigern eventually returned to Scotland (where he is known as St Mungo), but he left behind a follower named Asaph, who gave his name to the village and, eventually, the cathedral church of St Asaph. The west end of the church

Nothing now remains of Asaph's pre-Norman monastery, nor indeed of the 12th century Norman church that replaced it. That church was burned to the ground by the Earl of Warwick's men during Edward I's campaign to subdue the native Welsh in 1282.

The Bishop of St Asaph, Anian II, was livid, for he had supported Edward's campaign, and in retaliation, he became the only bishop in the see of Canterbury who did not excommunicate Edward's Welsh foes.

Eventually, the king and bishop were reconciled, though only after Anian paid 500 marks into the royal treasury. The bishop then embarked on a campaign to rebuild his damaged cathedral by cleverly sending a well-known manuscript of the Gospels on tour through Hereford, Lichfield, and Wales to solicit donations.

Anian's rebuilding of the earlier Norman church survives in the lower part of the tower and the nave, with its rounded pillars.

Around 1391 the large central tower was erected over the crossing, built by a mason from Chester named Roger Fagan. No sooner had Fagan's tower been completed than St Asaph's suffered another burning, this time at the hands of Owain Glyndwr in 1402.

The tower had to be rebuilt again in 1714 after the top was damaged in a storm, and you can clearly see the different type of stone used in the later work. Much of the interior was rebuilt by Sir George Gilbert Scott in a Victorian restoration. William Morgan, bishop from 1601-04, translated the Bible into Welsh for the first time. He is buried in the cathedral, but an even more obvious memorial stands in the churchyard. This memorial, known as The Translator's Monument, is in the shape of a preaching cross, decorated with a corona, and with statues of those who helped Morgan translate the Bible.

In the interior, aside from Bishop Morgan's tomb, you will see a very good set of 15th-century choir stalls decorated with beautiful pinnacles, which seem to spring like trees from the slender columns dividing the seats.

Just as interesting is a very worn effigy of a medieval bishop, perhaps Anian II (1268-1293) who oversaw the rebuilding of the cathedral after Edward I's destruction. One other feature is a wooden chest for keeping records, dated to 1738.

If the word 'cathedral' conjures up images of an imposing, larger-than-life building, then St Asaph's will come as quite a shock. In size, it is on the same scale as a large town church. Indeed the only external feature that might give away its importance is the impressive west front with its wonderful west doorway with multiple orders of moulding. Inside, the nave is deceptively simple, a testament to the very plain style adopted by Bishop Anian and those who followed him. 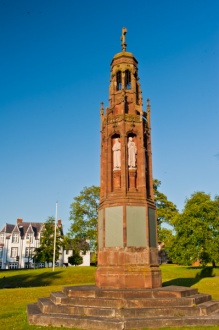 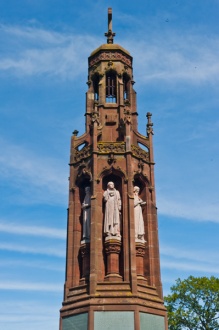 Statues of the 'Translators' This superbly-presented, single-storey, detached log cabin with hot tub, is situated on a small development made up of six lodges in a semi-rural location near the city of St Asaph …
Sleeps 3 This detached lodge rests within the city of St Asaph and houses one bedrooms, sleeping up to two people.
Sleeps 2