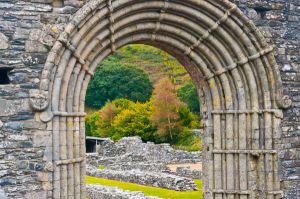 One of the most important historic abbeys in Britain, Strata Florida (its name means "the vale of flowers") was founded in the 12th century by Cistercian monks. It became celebrated as the "Westminster Abbey of Wales", and the monks are credited with introducing many new agricultural methods to Britain.

Numerous native Welsh princes are said to be buried here. A beautifully carved Romanesque arch and medieval floor tiles give some hint as to the former glory of Strata Florida.

In 1164 the Norman lord Robert fitz Stephen founded a small monastery near Tregaron, in west Wales, with monks drawn from the Cistercian abbey at Whitland. Just one year later fitz Stephen's lands were seized by Rhys ap Gruffudd, Prince of Deheubarth.

Lord Rhys, as he is known to history, lavished money and lands on the fledgeling abbey, and the monks were able to move to a more hospitable location a few miles away, where we find the abbey ruins today.

Lord Rhys was said to have loved and cherished his abbey in the 'Vale of Flowers' and gave them huge tracts of land. The monks focussed much of their attention on turning these gifts of land to pastoralism and raised large herds of cattle, horses, and sheep.

They also cultivated large estates in the low-lying valleys that stretched to the sea, and built roads and bridges to ease transportation throughout their far-flung estates. The extent of the abbey's farming can be seen in the fact that by the end of the 13th century the monks of Strata Florida ran no fewer than 15 granges, or outlying farms. 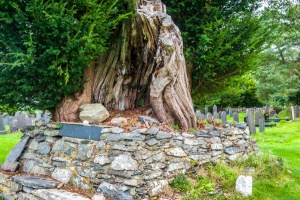 The new roads also brought pilgrims to the remote abbey, and in time Strata Florida gained a reputation as a centre for learning, the arts, and Welsh culture. This is reflected in the fact that Dafydd ap Gwilym, the most celebrated Welsh poet of the medieval period, is buried here under a yew tree.

Building the abbey church was a slow process, and it was not until 1201 that the monks were ready to occupy the east end of their new building.

Unfortunately, King John slowed the building plans when he accused the monks of helping his enemies in 1212 and imposed huge fines on Strata Florida. But construction never completely stopped, and one of the best features to emerge from the early 13th-century church is the often-photographed west doorway, carved with 6 orders of moulding (only 5 of which survive today).

Ranges of domestic buildings were erected around a cloister, in common with most Cistercian designs. Then in 1286 the church was struck by lightning, and badly damaged in the ensuing fire.

The abbey saw action in Owain Glyndwr's 1405 rebellion, and English troops were garrisoned at the abbey, where they used the church as a stable for their horses. The destruction wrought by the English seems to have quite long-lasting, for the refectory and infirmary are recorded as already ruinous before the Dissolution of the Monasteries.

In 1535 Henry VIII's commissioners assessed Strata Florida with an income of 118 pounds. The abbey paid a large sum to be spared dissolution in 1536, but that only put off the final reckoning, which came in 1539. Only 7 monks were left by that time.

The abbey estates eventually passed to Robert Devereux, Earl of Leicester, and then down to his heirs, the Earls of Essex. The abbey site itself was purchased by John Stedman, who built a house to the south of the cloister range.

Today the abbey is a ruin, but several outstanding features give a glimpse of what Strata Florida must have been like in its prime. The most striking of these features is the west doorway, which is simply an outstanding piece of medieval craftsmanship.

You can see where local nobles and Welsh princes were buried, and the small remaining sections of medieval floor tiles. Among these tiles is a wonderful depiction of a gentleman admiring himself in a mirror. A piece of social satire, perhaps? Do take the time to visit the 18th-century church in the field beside the abbey; it boasts some excellent 18th and 19th-century memorials. 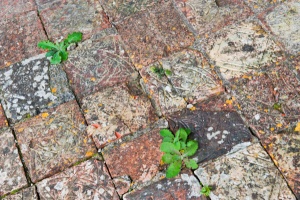 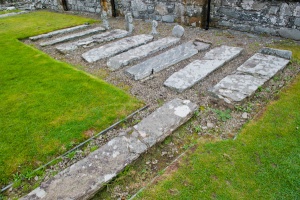 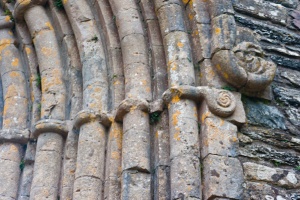 Detail of carving on the west doorway arch 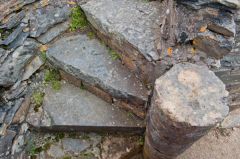 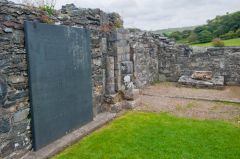 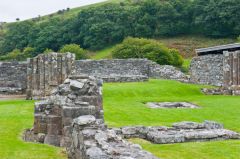