In 1088 the Norman lord Bernard of Neufmarche drove into Deheubarth and captured Brycheiniog. Rhys of Deheubarth (Rhys ap Tewdwr) sought to defend his territories, but in 1093 he was killed in battle, leaving no effective Welsh leader to stem the Norman tide.

The Earl of Shrewsbury drove from Powys into Ceredigion and then south into Dyfed. He built castles at Cardigan and Pembroke, and captured Rhys' youngest son, Hywel. At the same time, Glamorgan was falling to the ambitions of Robert Fitzhammo. By 1090, it seemed that all Wales was under the Norman thumb.

That impression is misleading. The Normans defeated the Welsh kings, true, and built powerful castles to hold their new possessions. But the castles were situated in the lowlands. The highlands remained Welsh, and from there they could launch attacks upon the Normans. Also, without strong support from the English king, these border barons were on their own in enemy territory. Within a decade the apparent Norman stranglehold on Wales was broken.

The leaders of the Welsh revival were the three sons of Bleddyn ap Cynfin, Cadwgan, Maredudd, and Iorwerth. But they were aided, if not directly, by Gruffudd ap Cynan, who escaped from his captivity at the hands of the Earl of Chester around 1094 and quickly regained his lands in Gwynedd.

By 1096 the sons of Bleddyn ap Cynan had captured Montgomery Castle and pushed the Earl of Shrewsbury back from Powys and Ceredigion. In 1098 the Earls of Shrewsbury and Chester went on the offensive and marched into Gwynedd. There, on the banks of the Menai Strait, they met a force of Norwegians under the delightfully named king of Norway, Magnus Barefoot. In a fierce battle, the Normans were repulsed, and the Earl of Shrewsbury was killed by an arrow in the eye, shot by Magnus.

This story illustrates the difficulties faced by the Welsh, particularly in the north. They were beset on the one side by powerful Norman lords, and from the sea came Norse warriors bent on plunder.

The consequences of the Welsh resurgence were far-reaching. Gruffudd ap Cynan regained control of Gwynedd, while Powys and the remnants of Deheubarth fell to the three brothers. Never again would the kingdom of Gwynedd and Powys be reunited under one king.

The Welsh did not have things all their own way, however; the Normans could not be dislodged from their castles in the south. And now the king of England took a hand. William could not allow his barons to be run out of Wales; it was to his advantage to have them as a buffer against the Welsh.

In 1097 William began sending royal troops into Wales to support his barons, a practice that was to continue for two hundred years. For the next two centuries, Wales was in a state of turmoil - the Welsh could not drive out the English, and the English could not exert enough control to completely subdue the Welsh.

Gruffudd regained Gwynedd, or at least most of it, in 1098. For the next 20 years, he was content to consolidate his gains and administer his kingdom. But in 1118 he began a series of systematic attacks upon the territories of Powys, gradually annexing lands beyond his borders. By 1137 this remarkable ruler was able to add Ceredigion to his possessions.

Gruffudd was also responsible for a resurgence in poetry and literature - after all, someone had to sing of his mighty deeds!

Back: The Medieval Welsh Church
Next: Owain Gwynedd and Rhys ap Gruffudd 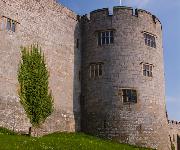 This prolonged conflict between England and France began in 1337


The French gradually pushed England out of their territory, leaving only a small English enclave at Calais

Major English victories included the Battles of Crecy and Agincourt