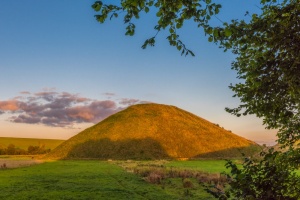 All right, here you are at last, camera in hand, beneath the English sky (which honestly isn't grey and wet all the time), and you are surrounded by all sorts of ancient things.,/p>

There are earthworks of different sorts, stones large and small, tombs of varying shapes and sizes, and so on. How on earth do you sort it all out and know what you're looking at? Don't worry, it isn't as confusing as it looks. Here are the major prehistoric monuments you are likely to run across:

Causewayed Camps
These are some of the oldest remains in the English landscape, dating from around 3500 B.C. They consist of a series of from one to four concentric rings of banks and ditches enclosing an area up to nine hectares. The ditches are bridged by ramps of earth, or causeways, in several places, sometimes with corresponding gaps in the banks to form an obvious place of entry.

In a masterful attempt at confusion, archaeologists have named these enclosures "camps", which they aren't. In only one case out of a score of these camps is there any evidence of even a temporary dwelling within the enclosed space.

What were they used for, then? Probably as a multi-purpose gathering place, combining the functions of livestock pen, trading centre, church, feasting area, and ceremonial arena. Unfortunately, the causewayed camps, most of which have been found in south and west England, are generally unspectacular to visit and have often been appropriated for other uses by future generations, making it difficult to get a sense of their original state. The best-preserved and perhaps the most important camp archaeologically, is Windmill Hill, near Avebury in Wiltshire.

Long Barrows
These are Neolithic (New Stone Age) tombs which are roughly contemporary with the causewayed camps. There are two main types of long barrows; those made entirely of earth, called, you guessed it, earthen long barrows, and those made with a chamber of large stones, called megalithic or chambered long barrows. The main thing to remember about long barrows is that they were communal tombs, holding from one to fifty adults and children.

Not only were they tombs, but centres of religious activity focussed on a cult of the dead and fertility. Often, the bones of the dead were used in ceremonies performed at the recessed entrance to the barrow. Another curious thing about the barrows is that the dead were usually interred after all the flesh had been removed, and occasionally after the bones had then been burned in a form of cremation ceremony.

Equally curious is that we don’t know how these people disposed of the vast majority of their dead, as only the bones of a very select few were interred in the barrows. Of the other 99.9% of the population, we have no archaeological record.

The long barrows, ranging up to 350 feet in length, were oriented with the large end pointing roughly east, and the tapering small end pointing west. It has been speculated (you run into the word 'speculated' a lot in prehistory) that this orientation had to do with the importance of the rising sun in Neolithic religions.

The actual burials are always at the large, eastern end of the barrows. Another point to keep in mind is that there were very few grave goods included in long barrows; generally some ritually broken pottery shards and arrowheads, but nothing to indicate the importance or otherwise of the people buried. Some of the more rewarding long barrows to visit are Wayland's Smithy, in Oxfordshire, West Kennet, in Wiltshire, and Belas Knap, in Gloucestershire.

Passage Graves
Really another type of long barrow, these are Neolithic tombs begun a few centuries after the barrows, consisting of a central chamber reached by a narrow, low passage, all of stones. Most passage graves are surmounted by a round mound of earth rather than a tapering barrow. The best-preserved is Bryn Celli Ddu, in Gwynedd. 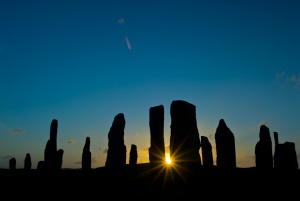 Stone Circles
Beginning as early as 3300 B.C. standing stones, often in the form of a circle or flattened oval, began to be erected around the British Isles. At least 900 of them still exist, though many more must have been destroyed in the march of 'progress'. The most famous, though not the most moving or impressive, is Stonehenge in Wiltshire. And no, Stonehenge was NOT built by the Druids; they missed out on all the hard work by several thousand years.

A lot of pretty outrageous claims have been made for the purpose of these circles, ranging from UFO landing pads to observatories for a highly evolved class of astronomer priests. The truth is probably a lot more mundane; most would have been an evolved form of the earlier henges and causewayed camps, functioning as multi-purpose tribal gathering places for ritual observances having to do with the seasons and the fertility of the earth.

Aside from Stonehenge, the most visitable stone circles are Avebury, in Wiltshire (author's choice as the cream of the crop), Castlerigg in Cumbria, and the Rollright Stones in Oxfordshire.

Hill Figures
Here and there throughout England, usually on the slopes of the chalk hills of the south, are incised figures of huge proportions cut into the earth. Often visible for miles around, these hill figures give off an air of ancient sanctity. Well, don't sniff that sanctified air too closely, you may find it rancid.

Many of the hill figures you see are recent copies, laid out in the past 150 years. Of the legitimate hill figures, the most famous are, unfortunately, of indeterminate age. The Giant of Cerne Abbas, in Dorset, and the Long Man of Wilmington, in East Sussex, have defied the best efforts of archaeologists to date them. Conjecture ranges from the Iron Age to Saxon times. The White Horse of Uffington has recently been dated to 2000 BC, a good millennium older than had been thought.

Henges
Basically a simple bank and ditch enclosing an area of land. The bank is outside the ditch, so they would not have been defensive enclosures but were more likely a form of religious and ceremonial gathering place. The henges are younger than causewayed camps, with the oldest built about 3300 B.C.

The largest henges enclose up to 12 hectares. Some, though not all henges have stone circles within them, while others show remains of wooden rings. The first phase of Stonehenge belongs to this class of monument, though it has now been overshadowed by the famous standing stones which were added at several later dates. Other henges to visit include Avebury, Durrington Walls, and Woodhenge, all in Wiltshire, and Arbor Low in Derbyshire.

Barrow Mounds
These are the most numerous of the prehistoric monuments you are likely to encounter (there are over 6000 in the West Country alone). On Ordnance Survey maps these are often marked as "tumuli". Though most tumuli are Bronze Age, this burial form remained in use into the Iron Age and even reappeared in the Dark Ages. In some places it seems there are more barrows about than there are people. Barrows were a new form of tomb brought to England by the Beaker People around 2200 B.C.

The main thing to note about barrow mounds is that they are primarily burial places for individuals rather than communal sites like the earlier long barrows. The most common type is a simple round bowl like an upended pudding. Ingenuously, they are called bowl barrows. Later developments in the Bronze Age include bell, disc, saucer, and pond round barrows, most of which are found in Dorset and Wiltshire.

The other point to remember about barrow mounds is that the burials within them sometimes contained elaborate grave goods. In the Iron Age the important individual being buried, man or woman, was arrayed in full dress, with a stash of goods laid by to indicate his or her importance, though in the Bronze Age burial dress was rare.

This is in stark contrast to the simplicity of the earlier communal graves typified by long barrows. Bronze Age barrows are usually burial places for the remains of important individuals; as with the Neolithic, we simply have no idea how most people’s remains were disposed of.

Barrows don’t always contain a burial, and of those that do, cremation was more common than a buried skeleton. One theory is that their prime function was not funereal, but as a territory marker. They are often sited at the edges of a geographic territory, and always not on the true tops of the hills but on the apparent horizon where they could have been seen from furthest away.

They are generally sited in areas that would have been open land, such as heath or downland, not in woods where they couldn’t have been seen. When new, the mounds of fresh earth or chalk would have been very impressive indeed. 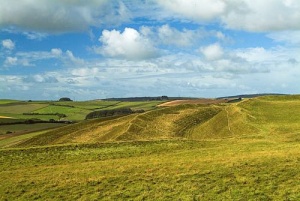 Hill Forts
Dating from the Iron Age (approximately 700 B.C. to 50 A.D.) these hilltop enclosures are the youngest of the prehistoric remains to be seen. They are defensive structures enclosing high places with rings of ditches and banks. Often there were wooden or stone walls atop the banks as a further barrier. In some cases a series of concentric ditches and banks were built.

The hill forts do not seem to have been places of permanent settlement but may have been emergency assembly points for tribes, or the case of the smaller forts, even single families. There are thousands of hill forts throughout the British Isles in various stages of repair, though the most spectacular is without a doubt Maiden Castle in Dorset, while Uffington in Oxfordshire (just above the White Horse) is well worth a visit.

There you have it, a mini-guide to the strange and interesting world of ancient remains that can be seen around England. Hopefully, you now have enough information to impress your fellow travellers and understand what you are looking at.

MORE Prehistoric Britain:
Back: The Neolithic Era
Next: The Bronze Age


The monarch's name was William