Passionate about British Heritage
History > Tudor > Dissolution of the Monasteries

The Dissolution of the Monasteries 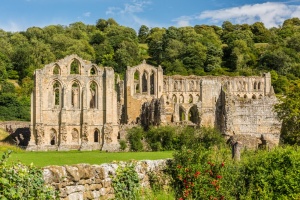 Henry VIII took his most decisive step against the power of the church in 1538, when he began the Dissolution of the Monasteries. He did it piecemeal, perhaps to avoid too much outcry at the start. First the small, less powerful houses had their property confiscated and their buildings blighted (made unsuitable for use). They were followed the next year by the large houses.

Philosophical concepts of the power of the king over church may have played a part in Henry's decision to suppress the monasteries, but so did greed. The monasteries were rich, and a lot of that wealth found its way directly or indirectly to the royal treasury.

Some of the monastery buildings were sold to wealthy gentry for use as country estates. Many others became sources of cheap building materials for local inhabitants. One of the results of the Dissolution of the Monasteries is that those who bought the old monastic lands were inclined to support Henry in his break with Rome, purely from self-interest.

Attitudes towards the Dissolution

Many of the clerics themselves thought that a change was in order. The difference was, they thought the wealth they possessed should go to charity, "religious and educational enterprises."

Everyone else had a personal stake in the matter; Henry wanted money, Parliament wanted to raise money without having to impose unpopular taxes, the gentry saw a chance to increase their own estates, and the merchant middle class saw a chance to become landed gentry themselves.

Henry sold the monastic lands for bargain basement prices, such was his need for ready cash. The real beneficiary of the Dissolution was not the king, but the new class of gentry who bought the lands. The suppression of the monasteries and places of pilgrimages was devastating for those pilgrimage centres that had no other economic base.

Income for people on the pilgrim routes dropped, with no way to recover it. The other great loser of the Dissolution was culture; many monastic libraries full of priceless illuminated manuscripts were destroyed, with little or no regard for their value.

The fate of the monks and nuns

The monks and nuns were treated quite well as a rule. Only a few who resisted were summarily executed. The others, including 5000 monks, 1600 friars, and 2000 nuns, were given reasonable pensions.

Many of the monks and friars went into regular church office, so they could not be said to have suffered. Those who did suffer were the thousands of servants attached to the monasteries. They numbered more than the monks, but there was no pension for them, no golden handshake.

The English Reformation was slow to gather steam. Catholics were not mistreated (at least not at first), and in many parts of the country religious life went on unchanged. Catholic rites and symbols remained in use for many years.

Dissolution of the Monasteries Images