Elizabeth I and Tudor England

The feeble Edward VI (1537-53) was only ten years old when he came to the throne. The Duke of Somerset (The Lord Protector) acted as regent. Somerset introduced Protestant reforms to the English church. Uniformity of service was ensured by an act of Parliament. In 1551 Archbishop Cranmer's Forty Two Articles of religion laid the foundation for Anglicanism.

When the Edward died at the age of sixteen the Duke of Northumberland tried to put a reluctant Lady Jane Grey, great grand-daughter of Henry VII, on the throne ahead of Edward's sister Mary. There was no real public support for the move and it fizzled after only nine days. The Duke, the unfortunate Jane Grey, and all her major supporters were executed at the Tower of London. Overseas, Calais was finally lost to the French, and a legacy of English presence on the continent going back to William the Conqueror disappeared forever. 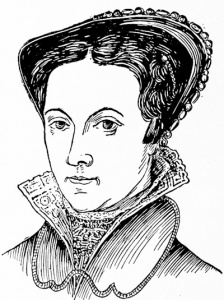 Mary I
The reign of

Queen Mary (1553-58) was marked by religious upheaval and dissension. She had been raised as a Catholic, and she sought to undo the Protestant changes of the past several years. Protestants were suppressed and burned in the hundreds, an act which earned Mary the charming nickname "Bloody Mary".

Mary entered into an extremely unpopular marriage with Philip, heir to the throne of Spain. Parliament refused to accept Philip as co-ruler, and after much wrangling, he took his place as Mary's consort only, with no right to inherit the throne. Mary seems to have doted on Philip, but he regarded the marriage as an affair of political convenience.

When Mary died the pendulum of English religious life swung once again. Elizabeth I (1558-1603) was raised as a Protestant, but she was shrewd enough to play the game of politics; she was a master of procrastination and of playing one side against the other. 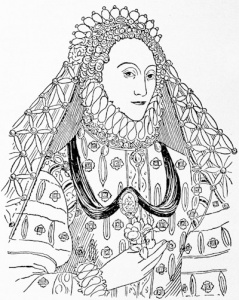 Under Elizabeth the Church of England was officially established (1563) with Protestant dogma, but a liturgy, rites, and church organization which were essentially Catholic in form. There were many non-conforming Protestant sects at this time, most of which were tolerated under Elizabeth's policies. Life was not easy for Catholics, though. There were as many executions of Catholics under Elizabeth as there were Protestants under Mary, though over a reign nine times as long.

One of the main thorn's in Elizabeth's side was Mary, Queen of Scots. Mary, a Catholic, fled from Scotland after managing to offend nearly everyone there, and took refuge in England. The trouble was that Mary became the centre of numerous Catholic plots to regain power in England. Elizabeth might have been able to overlook that, but Mary had the gift of indiscretion and was discovered once too often corresponding with Elizabeth's enemies. Reluctantly, Elizabeth had Mary executed for treason.

Tension with Spain was constant during Elizabeth's reign. Philip, who had once been touted as a possible husband for Elizabeth, was now king of Spain. Spain had tremendous wealth pouring into its treasury from its territories in the New World, and English sailors had a habit of capturing Spanish ships on the high seas. This "piracy" was officially reprimanded by Elizabeth and unofficially praised. Sir Francis Drake and Sir John Hawkins were two captains who made their reputations and fortunes playing at piracy. 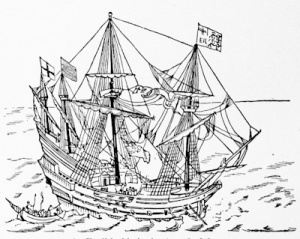 An English ship in the
Armada fight

In 1588 Philip assembled a great fleet of warships to invade England. He should have succeeded, as the Spanish Armada had far more fire-power than the English.

The Armada was sighted off Plymouth, where the English commander, Drake, was enjoying a game of bowls on the common, or Hoe. In one of those delightful scenes which become legends, Drake calmly insisted on finishing his game before taking ship to meet his foe. In reality, his bravado was based on good knowledge of the weather and the tides; he knew full well that he had plenty of time.

The English used their lighter, more manoeuvrable vessels to great advantage against the larger, heavier Spanish. They sent fire-ships into the midst of the Armada to spread panic and disperse the fleet. All might well have been lost, however, but a heavy storm came up and scattered the Spanish vessels. A combination of tactics, luck, and weather sent a tattered Spanish Armada limping around Scotland, down the west coast of Ireland, and home to Spain. 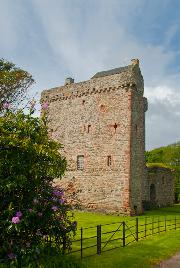