Open a new browser window with a map of a medieval monastery. 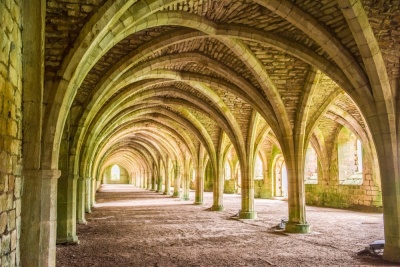 Early monasteries originated in Egypt as places where wandering hermits gathered. These early "monks" lived alone, but met in a common chapel. By the fifth century, the monastic movement had spread to Ireland, where St. Patrick, the son of a Roman official, set out to convert the Irish to Christianity.

The Irish monks spread Christianity into Cornwall, Wales, and Scotland. St. Ninian established a monastery at Whithorn in Scotland about 400 AD, and he was followed by St. Columba (Iona), and St. Aidan, who founded a monastery at Lindisfarne in Northumbria.

These Celtic monasteries were often built on isolated islands, as the lifestyle of the Celtic monks was one of solitary contemplation. There are no good remains of these early monasteries in Britain today.

The big change in this early monastic existence came with the establishment of the "Benedictine Rule" in about AD 529. The vision of St Benedict was a community of people living and working in prayer and isolation from the outside world. The Benedictine Rule was brought to the British Isles with St Augustine when he landed in Kent in AD 597.

Over the next thousand years, a wide variety of orders of monks and nuns established communities throughout the British Isles.

These orders differed mainly in the details of their religious observation and how strictly they applied those rules. The major orders that established monastic settlements in Britain were the Benedictines, Cistercians, Cluniacs, Augustinians, Premonstratians, and the Carthusians.

The first buildings of a monastic settlement were built of wood, then gradually rebuilt in stone. The first priority for rebuilding in stone was the chancel of the church. This way of proceeding meant that the rest of the monastery was at risk of fire, which accounts for the fact that many of the monastic remains you can visit today are in the later Gothic style of architecture.

Although the details of daily life differed from one order to the next (as mentioned above), monastic life was generally one of hard physical work, scholarship and prayer. Some orders encouraged the presence of "lay brothers", monks who did most of the physical labour in the fields and workshops of the monastery so that the full-fledged monks could concentrate on prayer and learning.

For an enjoyable look at the life of a medieval monk, read any of the excellent "Brother Cadfael" mysteries, by Ellis Peters.

The day of a monk or nun, in theory at least, was regulated by regular prayer services in the abbey church. These services took place every three hours, day and night. When the services were over, monks would be occupied with all the tasks associated with maintaining a self-sustaining community

Abbeys grew their own food, did all their own building, and in some cases, grew quite prosperous doing so. Fountains Abbey and Rievaulx, both in Yorkshire, grew to be enormously wealthy, largely on the basis of raising sheep and selling the wool.

Throughout the Dark Ages and the Medieval period, the monasteries were practically the only repository of scholarship and learning. The monks were by far the best-educated members of society - often they were the only educated members of society. Monasteries acted as libraries for ancient manuscripts, and many monks were occupied with laboriously copying sacred texts (generally in a room called the scriptorium). 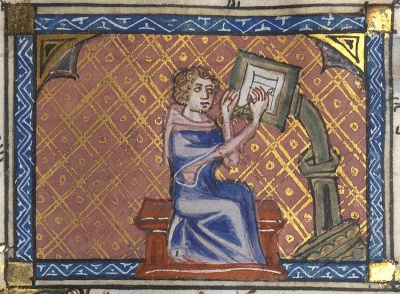 In the areas where Celtic influence was strongest, for example in Northumbria, the monks created "illuminated" manuscripts; beautifully illustrated Bibles and prayer books with painstakingly created images on most pages.

These illuminated manuscripts, such as the Lindisfarne Gospel (now in the British Museum), are among the most precious remnants of early Christian Britain.

The abbey (the term for a monastery or nunnery) was under the authority of an abbot or abbess. The abbot could be a landless noble, who used the church as a means of social advancement. Under the abbot was the prior/prioress, who ran the monastery in the absence of the abbot, who might have to travel on church business. There could also be a sub-prior. Other officers included the cellerar (in charge of food storage and preparation), and specialists in the care of the sick, building, farming, masonry, and education.

One of the main sources of revenue for monasteries throughout the medieval period were pilgrims. Pilgrims could be induced to come to a monastic house by a number of means, the most common being a religious relic owned by the abbey. Such a relic might be a saint's bone, the blood of Christ, a fragment of the cross, or other similar religious artefacts. The tomb of a particularly saintly person could also become a target for pilgrimages.

Pilgrims could generally be induced to buy an insignia which proved they had visited a particular shrine. Some popular pilgrimage centres built hotels to lodge pilgrims. The George Inn in Glastonbury is one such hotel, built to take the large number of pilgrims flocking to Glastonbury Abbey.

The decline of the monasteries

Monasteries were most numerous in Britain during the early 14th century, when there were as many as 500 different houses. The Black Death of 1348 dealt the monasteries a major blow, decimating the number of monks and nuns, and most never fully recovered.

When Henry VIII engineered his break with Rome in the 1530s, the rich monastic houses were one of his first targets. A few of the abbey churches near large centres of population survived as cathedrals or parish churches (for example Canterbury Cathedral, Durham Cathedral, and Westminster Abbey), but those that were isolated, including almost all the Cistercian monasteries, were demolished. Throughout the Tudor and later periods these shells of buildings were used by local people as a source of building material.

There are numerous good abbey remains in Britain today Some of the best are:
Glastonbury Abbey
Rievaulx
Fountains Abbey
Tintern Abbey

And of the abbeys that survived the Dissolution of the Monasteries, some to see are:
Westminster Abbey
Bath Abbey
Durham Cathedral