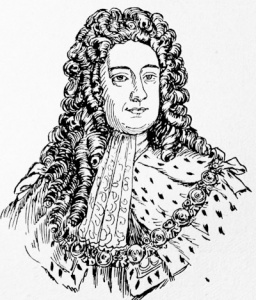 George I (1714-27) was magnificently unsuited to rule England. He spoke not a word of English, and his slow, pedantic nature did not sit well with the English. One of the results of George's inability or disinterest in ruling the English was that he handed over his authority to trusted politicians. This marked the origin of the office of the Prime Minister and the cabinet system of government.

The Old Pretender
The year following George's arrival saw a landing in Scotland by the "Jacobite" supporters of James Stuart, son of James II. This rising was easily defeated and James, later called The Old Pretender, fled to France once more.

The South Sea Bubble
The Duke of Marlborough's successes in the War of the Spanish Succession had been gained on credit, without monies granted, and the government was badly in debt. The South Sea Company was created to absorb the debt. It was little more than a paper company, founded through bribery of government officials and royals.

The idea was that the whole of the £31 million national debt could be converted into company stock. Speculation went sky high and the stock became grossly inflated. Inevitably, the stock crashed, bringing down the government and bankrupting investors.

After the "South Sea Bubble" burst, finances were put firmly in the hands of the Bank of England, with the result that the English economy became the best managed in Europe over the next several centuries.

MORE Georgian Britain:
Back :The Later Stuarts
Next : George II