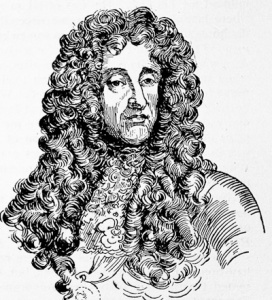 James II
Charles II was succeeded by his brother James II (1685-88). James was a Catholic, and he made several awkward attempts to re-establish the rights of Catholics, which succeeded only in allying the Whigs and Tories against him.

In 1685 Charles' illegitimate son, the Duke of Monmouth, launched a rebellion with the support of the farmers and labourers of Somerset. The Pitchfork Rebellion ended at the Battle of Sedgemoor, often called the last battle fought upon British soil. The aftermath to the Monmouth's Rebellion was a speedy and savage series of trials of those who had supported him.

These were the Bloody Assizes, presided over by the infamous Judge Jeffreys, who condemned hundreds of men to death.Popular opinion grew against James after a son was born to him, raising the prospect of a Catholic dynasty. Parliament extended an invitation to the firmly Protestant William and Mary of Orange (modern Holland) to take the English throne. James fled to France, where Louis XIV set him up with a Stuart 'court'.

William and Mary (1689-1702) ruled England jointly. Parliament ensured that they would never again have to deal with the like of James, by passing the 1689 Bill of Rights, which prohibited Catholics from ruling. In 1694 another watershed was reached when a group of merchants willing to loan the government money banded together to form the Bank of England. 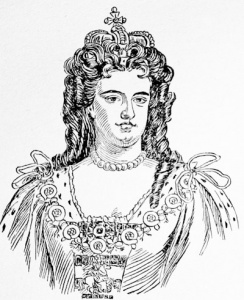 Queen Anne
William outlived Mary, and he was followed by the second daughter of James II, Queen Anne (1702-14). For the first part of her reign Anne was under the influence of Sarah, Duchess of Marlborough, and her husband, John Churchill, ancestors of Sir Winston Churchill. John Churchill was head of England's forces in the War of the Spanish Succession on the continent.

His spectacular successes, notably at the Battle of Blenheim, prompted Anne to provide the land and the funds for the erection of the magnificent (or grotesquely gaudy, depending on your architectural sensibilities) Blenheim Palace at Woodstock, Oxfordshire.

The Creation of Great Britain
In 1707 the Act of Union brought together Scotland and England to form Great Britain. The Union Jack was adopted as the new national flag, incorporating the crosses of St.George (England) and St.Andrew (Scotland). In 1713 hostilities in Europe took a short break, and the Treaty of Utrecht gave England a host of new territories, including Newfoundland, Acadia, St.Kitts, Minorca, and Gibraltar.

The end of the Stuarts
Anne had seventeen children, all of whom predeceased her, so on her death, the throne went to the Bavarian, George of Hanover.

Stuart Britain :
Back: Cromwell and Restoration
Next: The Plague