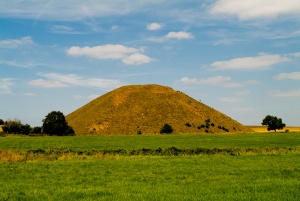 The Neolithic or New Stone Age can be defined as the time when people took up agriculture as a way of life, and stopped being nomadic hunter-gatherers. Sometime around 4000 BC the ideas and technology of farming, and perhaps some of the first livestock, crossed the Channel and arrived in England. Farming quickly spread all across the British Isles, a social revolution every bit as eventful as the Industrial Revolution some 6000 years later.

Neolithic farmers settled in stable communities, cleared land, planted wheat and barley, and raised herds of domesticated sheep, cattle, and pigs. What hunting they did as a supplement to their agriculture may have been done with the assistance of small dogs.

They settled on the easily drained soils of the upland hills and on the coastal plains, avoiding the thickly wooded valley bottoms. This meant that the areas of heaviest settlement were the chalk hills of the south and west, where many of their remains can be seen today.

These Neolithic settlers originally lived in rectangular log cabins, similar in style to those of the early American West.

Communities were small, but they were communities, so people could and did indulge in large projects requiring group participation, such as the building of communal graves (long barrows), causewayed camps, and henges.

Although these people were farmers, they hadn't yet ironed out all the fine details of crop management, so every 10-20 years the land would reach the point where it could no longer support crops and the group would have to move on.

Each group, probably no larger than an extended family, seems to have moved around a fairly small region in this way; packing up when the land would no longer produce. In a few generations, they could have returned to the original settlement after the land had lain fallow long enough to regenerate.

Life span was short, about 35 years for men and 30 for women. Arthritis was rampant, as was malnutrition. This was not a Golden Age of Yore; it was a difficult time to scratch a living from the earth.

This monarch came to the throne at the age of 18