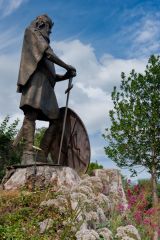 King of the Saxon kingdom of Wessex from 871 until his death in 899, Alfred was famed for his defence of western Britain against Danish invasion. He inherited a kingdon in dire peril from the east, as successive waves of Danish leaders pushed further and further west. Alfred successfully resisted a Danish invasion in 871, but the resulting peace was never going to last, and the Danes under Guthrum struck again in 876. At first the war went badly for the Saxons, and Alfred was pushed back into the marshes surrounding Athelney, in Somerset.

From this period, when his kingdom was crumbling around him, comes the apocryphal tale of Alfred and the cakes. According to the story, Alfred begged shelter of a peasant woman. The woman did not recognize the bedraggled warrior as her king, and charged him with minding griddle cakes cooking on the fire. Alfred, his thoughts occupied with the struggle against the Danes, let his attention wander and the cakes were burned. The peasant woman, returning to find her cakes burned, berated the king boldly. Unfortunately for history, it seems highly unlikely that the event ever took place. The story was not repeated during Alfred's lifetime, and first appeared in the 12th century Chronicle of St Neot's.

Alfred mustered his remaining men, and emerged from the depths of the marshes to begin a series of raids that we today would call a guerilla war. So successful was he that within two years he won a pivotal victory at Edington, and forced Guthrum to sign the Peace of Wedmore, whereby the Danish leader promised to retreat behind an imaginary boundary and allow himself to be baptised as a Christian. The Danish lands in the east became known as The Danelaw (i.e. where Danish law held sway).

If it were only for his military accomplishments, Alfred would still be remembered, but he accomplished far more in his life; he encouraged scholarship and learning (indeed he is traditionaly credited with founding Oxford University). He personally translated Latin texts, and may have initiated the historical compilation called The Anglo-Saxon Chronicle. He developed a British fleet, which helped repel a Danish invasion in 890, and reorganized the Saxon fyrd. He codified law and built a series of fortified towns, called burhs (from which our term 'burgh' evolved).