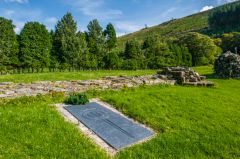 Where Llewelyn's grandfather had tried to bring the Welsh together in a spirit of unity, the younger Llewelyn ap Gruffudd's rule was tempered by a streak of decided self-interest. While the eye of Henry III was distracted by the prolonged Baron's War in England, Llewelyn tried with some success to extend his control over mid and southern Wales.

In 1255 Llewelyn's brothers Owain and Dafydd attempted to drive him from Gwynedd, but Llewelyn triumphed at the Battle of Bryn Derwin, and Llewelyn put both his brothers in prison.

He incarcerated Owain at Dolbadarn Castle for the next 20 years, but he allowed Dafydd to go free after a short imprisonment. Though this lenient move made political sense, as Llewelyn wanted to Dafydd's influence to help break free of English influence, trusting the volatile Dafydd was never a good idea. The first alliance between the two brothers did not last long, and in 1263 Dafydd fled to the court of Henry III.

In 1267 Henry made peace, and by the Treaty of Montgomery he acknowledged Llewelyn as Prince of Wales. There was little actual historical validity to Llewelyn's claim, and not unnaturally the self-styled 'Prince of Wales' title did not sit well with other powerful Welsh nobles, nor with his brother Dafydd. Dafydd joined Welsh conspirators in a plot to assasinate Llewelyn, but the plot was discovered in time and Dafydd fled back to England.

By the terms of the Treaty of Montgomery Llewelyn vowed to do homage to the English crown in return for English recognition of his right to be called 'Prince of Wales'. However, Llewelyn baulked repeatedly at the idea of appearing before the English king as a vassal. He refused to attend the coronation of Henry III's successor, Edward I, which, in reetrospect, was not the smartest move.

In 1277 Edward I launched a successful attack on Llewelyn's north Wales stronghold, with Dafydd's help. The English pushed Llewelyn back to the mountainous region of  Gwynedd, and Edward began the first wave of his castle building, in an effort to contain Llewelyn in his highland realm.

Llewelyn formed an uneasy truce with Dafydd, but Dafydd, as ever changeable, launched a surprise attack on English castles at Flint, Rhuddlan, and Hawarden on Palm Sunday, 1282. Llewelyn reluctantly decided that he had no choice but to suport his brother's revolt.

At Climery, near Builth Wells, Llewelyn was surprised by a company of English soldiers, and shot dead by an archer, who had no idea who he was. Llewelyn's death dealt the final blow to Dafydd's doomed rebellion, and the English quickly defeated the Welsh insurgents. The loss of Llewelyn was eloquently expressed by a court poet, Gruffudd ap yr Ynad Goch, whose elegy to the dead prince became a classic of medieval Welsh literature.

As for Llewelyn, rumour has it that he was buried at Cwm Hir Abbey, where a simple stone slab marks the possible burial site near the abbey altar.