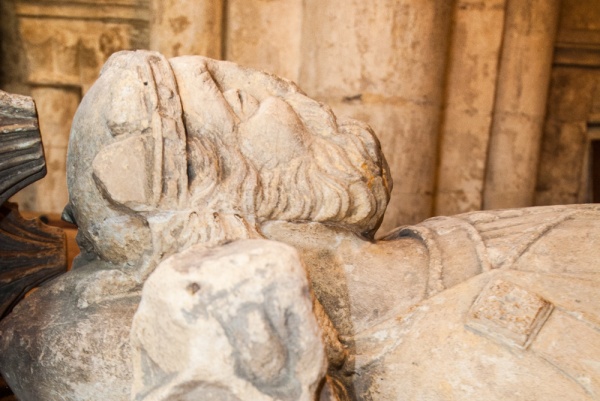 Athelstan (or Aethelstan) was the son of Edward the Elder and grandson of Alfred the Great. He was born to Edward's first wife Ecgwynn around AD 894. Edward died in 924, and Athelstan's half-brother Aelfweard immediately claimed the throne. His claim was supported by Wessex, while Mercia supported Athelstan's claim.

Aethelweard conveniently died just 3 weeks after Edward's death, and Athelstan was able to claim both Wessex and Mercia.

Fearing a challenge, Aethelstan banished another brother, Edwin, by setting him adrift in a small boat with no provisions. Legend tells that Edwin drowned himself rather than face starvation. Regretting the whole affair, Aethelstan later turned to charitable efforts, using a portion of the income from each of his estates to support the poor, and reforming the law to make it more fair and lenient on young offenders. He was looked on later as a learned and wise king.

He extended Alfred the Great's legal reforms. He seems to have been particularly concerned about the threat to social order posed by lawlessness and robbery. Athelstan was also notably pious, and given to founding churches and amassing a collection of holy relics. He also showed more interest in European politics than his predecessors, and married several of his sisters to European rulers, forging closer ties between England and the European continent.

He was also a very good military leader. In 926 Athelstan conquered Northumbria, and in the same year he had his sister Edith marry Sihtric, king of Jorvik (York). Sihtric died the next year, allowing Athelstan to take the city of York. Edith was married again to the Holy Roman Emperor, and two other sisters sent to France and Brittany.

Guthfrith, a cousin of Sihtric, tried to retake the throne but Athelstan captured York and the Danes submitted to his rule. On 12 July 927 King Constantine of Scotland, King Hywel Dda of Deheubarth, Ealdred of Bamburgh, and King Owain of Strathclyde gathered at Eamont, near Penrith, to accept Athelstan as their overlord. Athelstan could with justification now call himself 'King of the English'.

Aethelstan briefly forced tribute from Constantine II of Scotland, after invading Scotland in 934. His army included 4 Welsh kings and was accompanied by 18 bishops. His soldiers marauded as far north as Dunottar in modern Aberdeenshire, while at the same time his fleet attacked the Scottish coast, reaching Caithness, which was at that time part of the Norse kingdom of Orkney.

Constantine retaliated in 937 with the help of the kingdoms of Strathclyde and Dublin, but were defeated at Brunanburgh, the location of which is uncertain and could have been anywhere between southern Scotland and Devon. Many moden historians favour Bromborough on the Wirral as the most likely location. Accompanied by his younger half-brother Edmund, Athelstan routed Constantine, though losses on both sides were heavy.

In any case, Athelstan retained control over most of what is now England, save for, technically, the Celtic kingdom of Cornwall. Brunanburh has been called one of the most important battles in British history.

Athelstan became the first king to rule all the Anglo-Saxon people of Britain, and was in effect the overlord of all Britain. In his reign rulers from Scotland and Wales attended assemblies at his court and witnessed royal charters. He tried, though with limited success, to bring the Northumbrian nobility closer to southern Britain than to the Norse. 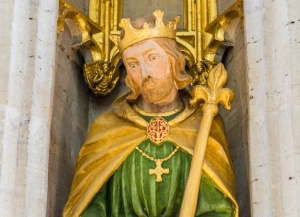 Athelstan likeness on the quire
screen of Ripon Cathedral

Athelstan died on 27 October 939 at Gloucester. According to his wishes, he was not buried beside his father and brother at Winchester, but at Malmesbury Abbey. His skeleton was lost in the turmoil of the Reformation but a 15th-century effigy and tomb mark his burial place.

After Athelstan's death, Anglo-Saxon control of northern England collapsed. Both Edmund and Eadred spent most of their reigns trying to win back control. Edmund briefly captured York, but after his death the Vikings regained it. It was not until 954 that the Viking king Eric Bloodaxe was driven out of Northumbria and the Anglo-Saxons once more controlled all of England.

The 12th-century chronicler William of Malmesbury wrote that 'no one more just or more learned ever governed the kingdom'. It is a verdict shared by modern historians, who generally regard Athelstan as the one Saxon king who can be reasonably compared to his grandfather Alfred the Great.

He is generally regarded as the first true King of England, and the father of medieval England. His achievements go far beyond merely asserting a strong central rule; he laid the foundation for monastic reform, established a thorough and efficient system of government, justice, and administration, and helped make England one of the wealthiest nations in Europe.

Even in his lifetime Athelstan was lauded as a strong military leader, a scholar, and a devout ruler. Yet by the Victorian period, his reputation had so far been overshadowed by Alfred that Charles Dickens gave him one short paragraph in his 'Child's History of England'. Athelstan is one of England's greatest rulers, yet remains very much a 'forgotten man'.