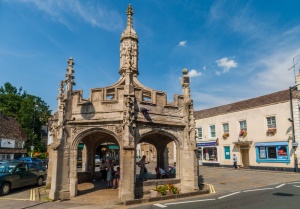 Malmesbury is one of the most attractive towns in northern Wiltshire. It is famous for its association with King Alfred the Great, and for its wonderful medieval church, Malmesbury Abbey, and its beautiful market cross.

Malmesbury claims the distinction of being the oldest borough in England, with a charter granted by Alfred the Great around 880 AD. The history of the town goes back much further, however, and is closely tied to its 7th-century monastery.

The town occupies a hilltop position, almost surrounded by the River Avon and its tributary, the Ingleburn. The Saxons, recognizing the strong defensive position of the site, occupied the hill as early as the 7th century.

In 642 the Irish monk Maildulph (alternately spelled Maildubh or Maildulf) established an abbey and school close to the Saxon castle here. One of the first students of the abbey school was Aldhelm, a close relative of King Ina of Wessex.

Aldhelm furthered his education at Canterbury, and when he returned to Malmesbury sometime around 671, he was named the head of the school, and later, the first abbot of a new Benedictine monastery founded by Leutherius, Bishop of Dorchester. 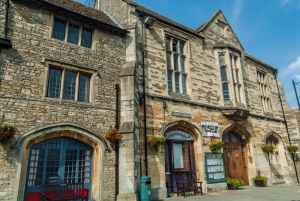 Under Aldhelm, the monastery at Malmesbury became famous across Europe as a centre of scholarship and learning. Aldhelm went on to become Bishop of the western half of Wessex, and to found churches at Wareham, Sherborne, Langton Matravers, Bradford-on-Avon, and Corfe. The church at Bradford-on-Avon can be seen today and must rank as one of the most complete Saxon churches in the country.

Aldhelm is also credited with being responsible for the first church organ to be built in Britain. The organ, built about AD 700, was reputedly a "mighty instrument with innumerable tones, blown with bellows, and enclosed in a gilded case." Aldhelm died in 709 and was buried in the Abbey church of Malmesbury.

The next great name associated with the Abbey is that of King Athelstan, grandson of Alfred the Great. Athelstan, who some historians consider the first king of a unified English realm, provided funds to enlarge the church and donated books and religious relics to the Abbey.

The relics, in particular, were important, as they had the effect of making Malmesbury a popular magnet for religious pilgrims. In 939 Athelstan died and was buried in the Abbey church, where his much-worn tomb, topped by a carved effigy in stone, can still be seen. 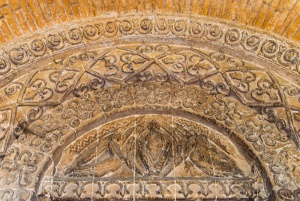 The most famous name associated with the town and Abbey is William Somerset, aka William of Malmesbury, who ranks with the Venerable Bede as the most influential, and widely read, historian of early medieval England.

Unlike many monastic "historians", William showed a concern for accuracy which stands comparison to accepted modern standards. William was born around the year 1090. He was educated at the abbey school and later joined the monastery as a monk.

There he indulged his passion for history, writing Gesta Regum Anglorum (The Chronicle of the Kings of England), covering the period from 449 to 1127. The work is especially useful in its accounts of the reign of King Stephen, which was contemporary with the writing.

In addition to accounts of royalty, William tells an amusing story of an 11th-century monk of Malmesbury named Elmer. Elmer, perhaps emulating Icarus, built mechanical wings and attempted to fly from the tower of the church.

His flight lasted for an impressive 200 metres before gravity intervened and Elmer crashed to earth, breaking his legs in the process. This flight is recorded in a picture formed of stained glass in a window of the church. 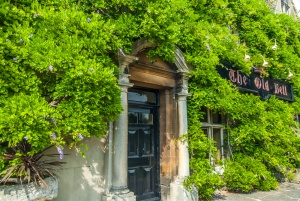 Even today, some over 1300 years after its founding, Malmesbury Abbey draws visitors from far and wide, though those visitors are no longer drawn by the Abbey's reputation for scholarship, but by the beauty of its historic architecture.

The Abbey church dates to 1180, though much was added over the subsequent several hundred years. By the 14th century, the church was as large and ornate as many cathedrals; indeed, the spire that topped the central tower of the abbey church was reckoned to be 427 feet high, 23 feet taller than that of Salisbury Cathedral.

Malmesbury Abbey is one of the few English churches with a completely detached, free-standing bell tower. See Berkeley, Gloucestershire for another example.

Most of the church interior is Norman, with huge drum piers supporting a nave of nine bays. The most notable feature is the tomb of Athelstan in the north aisle. The king lies with a lion at his feet and an ornate tabernacle at his head. However, the tomb itself is empty. According to William of Malmesbury, the king's body was removed from his tomb and reburied in the Abbot's private garden. 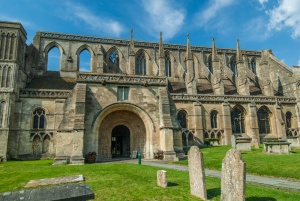 One body that, presumably, remained buried where it ought, is that of Hannah Twynnoy, whose grave is in the churchyard. Poor Hannah, a local barmaid, was mauled to death in 1703 by a tiger in a travelling circus.

The fascinating inscription on her tombstone tells that Hannah was a serving girl at the White Lion Inn. In 1703 she went to see a travelling circus which had come to Malmesbury, and in tragic circumstances a tiger got loose and mauled the poor girl, who died of her injuries.

The tale is something of a local legend, but there is something curious about the tale; how did the family of a poor serving girl pay for such an elaborate tomb? And why is there no mention of the tiger affair in any record of the time? Curious indeed, but all the more intriguing because there are no answers!

Beside Malmesbury Abbey is Abbey House, constructed about 1542 by William Stumpe (see above), shortly after the abbey itself had been dissolved. Stumpe used the 13th century Abbot's house as the foundation for his new building. The building was much enlarged in the 20th century, though the additions are sympathetic to the original Tudor style.

After several years of neglect, a modern garden covering 5 acres has been built on the site once occupied by the Abbot's gardens. Here, hedges divide the space into garden rooms of different styles. Created by avid gardeners Ian & Barbara Pollard, who have made something of a name for themselves by sometimes gardening in the nude (visitors are warned well ahead of such occurrences in case this may cause any offence to anyone).

Abbey House Gardens covers several acres of delightful formal, informal, and woodland garden areas. There is profuse colour in summer, and interest all year round.

One hedge of yew outlines the foundations of the Lady Chapel, destroyed when the abbey's western tower fell around 1500. In the knot garden, a planting echoes the shape of the Celtic crosses found on the Isle of Iona. Other garden areas are given over to herbaceous borders, a herb garden, bog garden, an ornamental pond, a foliage garden, and rose beds. More about Abbey House Gardens >>

A fairly new attraction in Malmesbury are the Abbey Steps, leading from the river to the Abbey. Here, nine bronze plaques, each representing an episode in Malmesbury's history, are installed on the steep stairs leading up from the riverbank to the church buildings.

Some of the episodes commemorated are the founding of the Abbey, the death of Athelstan, the sale of the abbey to William Stumpe, and the building of the town's Market Cross in 1490. 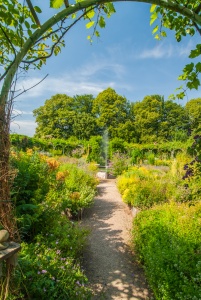 The Market Cross deserves special mention. The cross now stands in partly-isolated splendour in the middle of the market square, with roads converging on all sides. Though the juxtaposition of tarmac and medieval architecture is somewhat jarring, its isolation does allow you to study the cross without distractions.

The architecture is magnificent; the central pinnacle rises high above the supporting arches, and the effect is that of a royal crown made for a grossly oversized kingly head. The cross acted as a shelter for merchants on wet days, and still occasionally serves as a gathering place and selling point for local charities.

The town hall of Malmesbury stands on a site that was once used as a preceptory by the Knights Templar. Within the building is the Athelstan Museum, with exhibits not only on the Saxon king of that name but covering the history of Malmesbury over the centuries.

The enjoyable River Walk makes a circuit along the banks of the Avon and the Ingleburn and gives you a greater appreciation of the geographic prominence of the hilltop site that first attracted the Saxons to settle here.

One of the most prominent features of the Malmesbury skyline, seen from the river, is the tower of St Peter's. The tower is all that is left of the parish church, which was demolished in the 17th century when the structure became unsafe.

Malmesbury seems to have had hard luck with its churches, for yet another ruined church graces the town. That is St. Mary's, formerly the parish church, but now the parish hall, whose abbreviated single storey looks lonely without a tower. One of the former rectors of St. Mary's was the father of Thomas Hobbes, the philosopher who later became the tutor of Charles II.

The ivy-covered Old Bell, on Abbey Row, is a Grade I listed building that lays claim to the title of the most ancient inn in Britain. The building dates to the 12th century when it acted as a guesthouse for the Abbey next door.

In St John's Street are a row of almshouses (known, not surprisingly, as St John's Almshouses). These are, at least in theory, used for housing widows or old ladies. Still more intriguing are the corner houses on the same street, with a large arch, now bricked in, and a gabled roof topped by a cap of steeply-pitched slate tiles. This is said to be the oldest house in the town.

More self catering near Malmesbury

More bed and breakfasts near Malmesbury