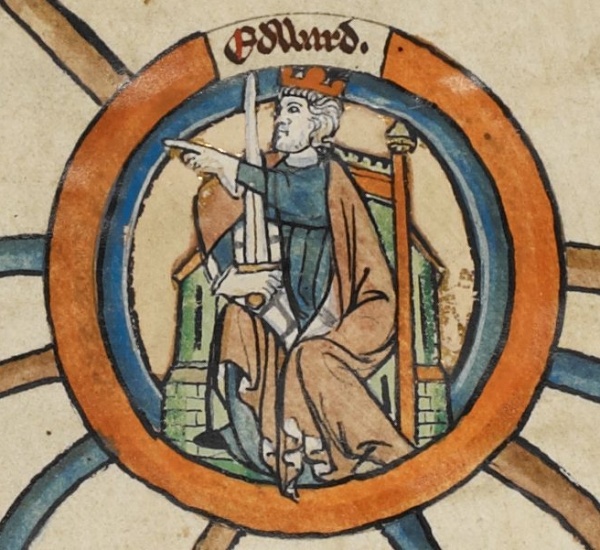 Edward was the son of Alfred the Great, born to Alfred and his queen Ealhswith of Mercia around AD 874. His moniker 'the Elder' does not come from the fact that he was Alfred's eldest son and heir, but was used by historians to distinguish him from the later King Edward the Martyr.

According to the contemporary historian Asser, who wrote a biography of Alfred the Great's life, Edward and his youngest sister Aelfthryth were educated at Alfred's court, by both male and female tutors, who taught them to read both ecclesiastical and secular prose in English, including Old English poetry and the Psalms. They were also taught behaviour considered worthy of the court, such as humility and gentleness. The upbringing of Edward and Aelfthryth is unique; the only known example of a Saxon prince and princess receiving the same education.

Though he was the eldest son of the king, Edward's accession to the throne was not assured, for by Saxon custom a strong and able relative could have an equally valid claim to the throne. His uncles Aethelhelm and Aethelwold had claims to the throne, for they were older and the sons of Alfred's elder brother Aethelred, who had reigned before him. Aethelhelm appears to have died sometime around 850, but Aethelwold survived, and seems to have been regarded as higher in status.

Alfred the Great did everything he could to assure his own son's inheritance; he may have made Edward King of Kent during his lifetime. He promoted men who would support Edward, and had Edward accompany him on royal journeys, where he witnessed many of Alfred's charters. Alfred also seems to have given Edward military commands. We know that in AD 893 Edward commanded an army against the Vikings at the Battle of Farnham.

Around 893 Edward married Ecgwynn, of whom almost nothing is known, though she may have been a relative of St Dunstan. Together they had 2 children, a son named Aethelstan, who would become king after Edward's death, and a daughter who married Sihtric, the Viking king of Northumbria. Ecgwynn probably died around 899, for shortly after this Edward married for a second time, to Aefflaed, daughter of an ealdorman of Wiltshire.

King Alfred the Great died on 26 October 899, and Edward succeeded to the throne, taking the title King of the Anglo-Saxons like his father before him. Edward's first hurdle was the rebellion of his cousin, Aethelwold, whose claim to the throne was through his father, Aethelred. Aethelwold seized royal estates and encamped at Wimborne in Dorset. Edward raised an army and marched to nearby Badbury Rings.

Aethelwold declared that he would live or die at Wimborne, but it was an empty threat, for he stole away in the dead of night and made his way to Northumbria, where he was acclaimed as king. He sailed back to Wessex in 901 with an army. Each side gained and lost territory for a year, until Aethelwold was killed while defeating a wayward portion of Edward's army at the Battle of the Holme in 902. Thus ended the only real threat to Edward's throne.

Edward treated with the Danes in 906, but the truce was broken after a regime change in York. A separate group of Vikings from Britanny also raided along the Severn. From 909, Edward began a successful counterattack, with the help of his sister Aethelflaeda, who, as the widow of the Mercian king, controlled her own army.

While she reconquered and fortified the Severn area and Western Mercia, Edward did the same in East Anglia. By 918, the sibling rulers had pushed the Vikings back across the Humber. Aethelflaeda struck the crowning blow by taking York peacefully, the inhabitants themselves fearing Viking raiders and hoping for protection. The city was lost again in 919, after Aethelflaeda's death.

Edward continued to press north, in 920 fortifying Nottingham and Bakewell. After this show of power, he was accepted as overlord by the rulers of Northumbria, including York, Wales, Strathclyde, and the Scots. The 'submission' to Edward has been reinterpreted by many modern historians as a simple peace treaty rather than an acknowledgement of Edwards overlordship.

Edward also controlled Mercia through his niece, Elfwina. He continued the policy launched by his sister Aethelflaeda of building fortified towns, or burhs, throughout Mercia, with new burhs begun at Rhuddlan, Thelwall, and Manchester. He appears to have organised Mercia and the eastern Danelaw into shires. His assertion of control over Mercian affairs was not universally welcomed, and he was forced to put down a revolt at Chester in 919.

Edward had at least 13 children, 3 of whom ruled England after his death (Aethelstan, Edmund, and Eadred). His daughter Eadburh entered Nunnaminster abbey at Winchester, founded by Alfred the Great's wife Ealhswith. She died in 960 and was canonized as a saint in 972, and her cult flourished into the 14th century.

Edward himself founded a monastery beside Winchester Cathedral, dubbed the New Minster to distinguish it from the existing monastery. Edward may have been motivated to found his new minster because he was at odds with the monks of the Old Minster, and its Bishop, Denewulf.

This New Minster was probably meant as a royal mausoleum. Edward moved his father's body from the Cathedral (the Old Minster) to the new, and buried his mother there as well as the relics of St Judoc and St Grimbald. Edward was buried in the New Minster as was his son Aelfweard and his brother Aethelweard.

One of Edward's legacies was the practice of trial by ordeal. Though the concept existed long before his reign, the law code issued by Edward made trial by ordeal the only remedy for a proven charge of perjury.

Edward died at Farndon, near Chester, in 924, of wounds gained quelling the Chester revolt. He was buried in the New Minster at Winchester. Edward's successor was his son Aethelstan (often modernised as Athelstan).

Historians were generally favourable towards Edward's reign. He was considered inferior in learning to his father Alfred but his equal or even superior in military might. He ruled an expanding territory in the south of England for a quarter-century, asserting a strong central authority over the realm. The Danish threat was met and the Danish leaders brought to heel.

He helped organise the political structure of England with shires administered by shire-reeves, regional courts, and a centralised royal system of taxation. Though often overlooked by history, Edward the Elder can be said to have done as much as any ruler in laying the foundations of medieval England.