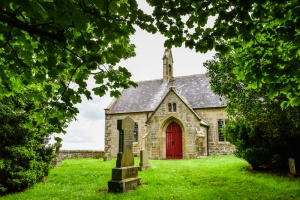 WHO
Welsh under Cadwallon of Gwynedd vs. Northumbrians under King Oswald

In AD 633 the pagan King Penda of Mercia and Cadwallon of Gwynedd formed an alliance. Together they marched north to invade Northumbria, a kingdom taking in much of modern Northumberland and the south-east corner of what is now Scotland. At Hatfield Chase, the alliance overcame the Northumbrian king Edwin.

The Northumbrian kingdom was divided into two parts, Bernicia and Deira. Eanfrith ruled Bernicia, while Deira was under the rule of Osric. While the Northumbrian kings tried to assert control over their territories Cadwallon's armies cut a swath of destruction across the north. Cadwallon killed Eanfrith while he was trying to negotiate a peace, and slew Osric shortly after.

Eanfrith's brother Oswald returned from exile in the Scottish/Irish kingdom of Dal Riata and claimed the crown of Northumbria. Though he had the support of many Northumbrian nobles, Oswald had to deal with the threat of Cadwallon and his army. He quickly raised an army, reinforced by Scots.

The Welsh troops marched north along the old Roman road of Dere Street, while Oswald arrayed his men in a defensive position between Brady's Crag and Hadrian's Wall, about 4 miles west of Hexham. The Welsh outnumbered the Northumbrians, but Oswald arranged his men so that Cadwallon had to approach along a narrow front, where their superior numbers counted for little.

The night before the battle Oswald claimed that he saw a vision of St Columba in the sky. In the vision Columba promised Oswald he would emerge victorious. According to the version of the battle related by The Venerable Bede, Oswald raised a cross and knelt in prayer with his troops before the battle commenced.

We know very few details about the battle, other than at length the Welsh broke ranks and retreated. The retreat became a headlong flight, and the Northumbrians pursued their foes south, cutting them down as they ran. Cadwallon was caught and killed at a place called the 'Brook of Denis', commonly identified as Rowley Burn.

Oswald united Deira and Bernicia and ruled as King of Northumbria, but only for 8 years before he too was killed in battle, slain by his old enemy Penda of Mercia at the Battle of Maserfield in modern Shropshire.

The site where Oswald defeated Cadwallon became known as Hefenfelth, or Heavenfield.

Results
The Venerable Bede's account of the battle took a decidedly religious view of events. He described Heavenfield as a triumph of Christianity over paganism and called it a turning point in returning the north to Christianity. If his account was propaganda, it was successful propaganda, for the traditional site where Oswald raised his battle standard became a place of veneration.

A medieval church was built on the site and dedicated to St Oswald. A large timber cross stands by the roadside just east of Chollerford, and even today Heavenfield Church is a destination for pilgrims and the site of an annual pilgrimage service.