HERITAGE HIGHLIGHTS:   Where the Jacobite cause died at last 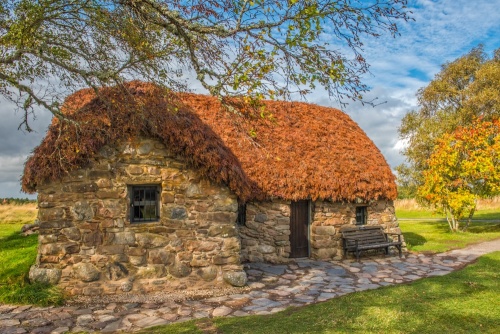 Culloden was the last tragic roll of the dice in Bonnie Prince Charlie's attempt to wrest the throne of Britain from the Hanoverian dynasty. On these fields near Inverness the Jacobite army met the English under the Duke of Cumberland, on 16 April 1746. The Jacobites were routed, and the Prince was forced to flee.

The exhausted and ill-nourished Jacobites were backed into a corner on Culloden Moor and forced to give battle. Cumberland's army bombarded them with a deadly barrage of grapeshot. The Jacobites' only hope was a quick attack, but Prince Charlie was indecisive at the crucial moment, and by the time he gave the order to attack, it was much too late.

The Scots charged the 'English' line (Cumberland counted many Lowland Scots among his troops so Culloden was not really a battle of English against Scots but Hanoverian supporters against Stuart supporters) and pushed them back in places, but the outnumbered Jacobites were no match for their foes. The Highlanders were massacred, and no quarter was given. 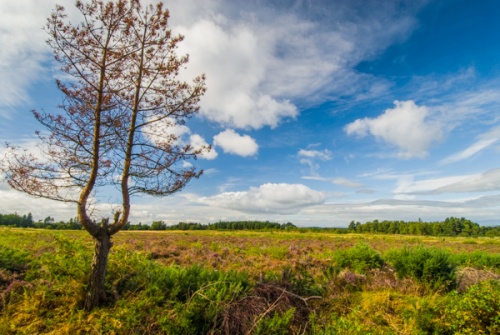 Culloden spelled the end of the Jacobite dream, and Bonnie Prince Charlie spent the next few months on the run, before eventually escaping to France.

NB. You can read an account of the Battle of Culloden in our British Battles section, with an overview of the conflict, its causes, the course of the battle, and its aftermath.

Visiting Culloden is not a modern phenomenon; people began coming to the battlefield from the mid-19th century. It is almost a modern equivalent to a medieval pilgrimage, with the difference that people have been drawn - usually - by Scottish nationalism rather than religious conviction.

Many visitors are descended from people who fought at Culloden. It wouldn't surprise me if my own ancestors fought and died here - with a name like Ross, that wouldn't be surprising. 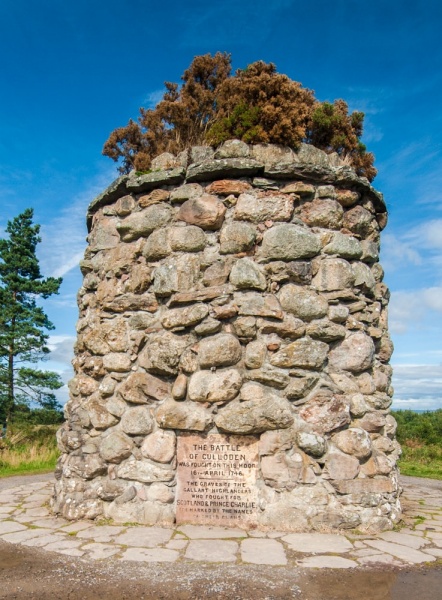 The most easily recognisable feature on the battlefield is the huge stone Memorial Cairn. This was built in 1881 to a design by Duncan Forbes. It stands 20 feet high and is built of large stones, rather like an oversized beehive. One thing I noticed is how much this cairn looks like the memorial cairn on the shore of Loch nan Uamh, where Prince Charlie finally took ship for France.

Duncan Forbes was also responsible for the Graves of the Clans; gravestones bearing the names of all the clans who lost men here in 1746. A single 'English Stone' monument commemorates men of Cumberland's forces who fell in the battle. No one knows where the 'English' dead were buried, so the stone should be taken as symbolic rather than an actual grave marker.

Most of the clan graves are clustered near the memorial cairn and the Well of the Dead, though there are a few outlying grave markers set well away from the others, such as a pair of stones commemorating the dead of Clan Donald. These 'outliers' are well signposted. 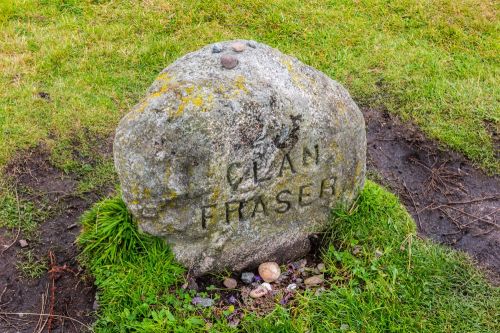 In recent years, many visitors have been drawn to Culloden by its connection to the immensely popular book and television series, Outlander, detailing the adventures of Jamie Fraser, who falls in love with a time-travelling English nurse and comes embroiled in the Jacobite rebellion.

Visitors drawn by the Outlander stories descended on the Culloden battlefield to see the Clan Fraser grave marker, and in the process caused damage to the surrounding area, turning it into a mudbath in wet weather. The National Trust for Scotland was forced to create a new path to enable visitors to get close to the Clan Fraser stone without causing further damage.

The Well of the Dead

A short distance away is the Well of the Dead, where Alexander MacGillivray of Dunmaglass died while leading the men of Clan Chattan. MacGillivray's body was found here after the battle by a local woman.

Reports of the battle state that the fighting was so fierce in this area that the Highlanders had to climb over their own dead to reach the enemy lines. Wounded soldiers crawled to this small well in a desperate attempt to quench their thirst.

The well itself is little more than a small stone-lined cistern dug into the earth. A stone slab commemorating the place was yet another marker erected by Duncan Forbes in 1881. 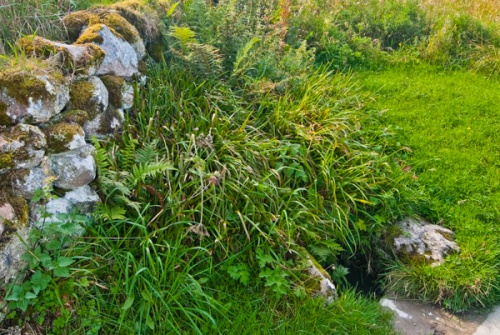 The Well of the Dead

The most easily recognised historic feature at Culloden is this very small thatched cottage. The cottage amazingly survived the battle, which raged all around it. It has been restored several times since then but is essentially the same as it was in 1746, and Bonnie Prince Charlie would recognise it if he saw it today. The roof is thatched with heather in traditional Highland fashion. 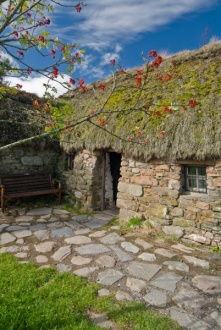 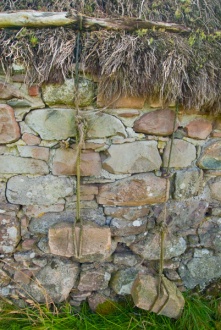 This very large boulder outside the eastern corner of the battlefield is traditionally held to be the Duke of Cumberland's observation post, where he stood to survey the battlefield during the combat. The Cumberland Stone is not well signposted but is relatively easy to find.

From the visitor centre, follow the drive leading to the site exit. Just before you reach the B9006 you will see an obvious path on your right (east). This forms part of the Battlefield Trail, extending into Culloden Wood and taking in parts of the battlefield outside the main site.

Follow the Battlefield Trail east to the road junction, go straight ahead across the junction, still following the B9006, and you will see the Cumberland Stone in the trees on your right. It is very easy to spot and takes about 10 minutes to reach from the visitor centre. 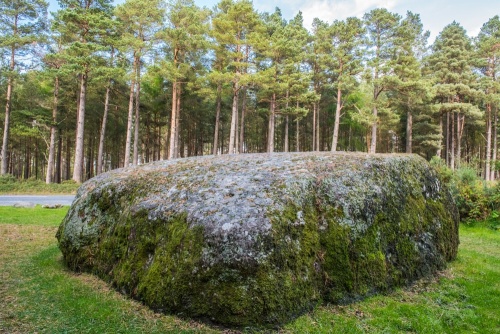 There are easy to follow footpaths linking the major battlefield locations on Culloden Moor, including Old Leanach Cottage, the Culloden Memorial, the Well of the Dead, and the Clan Graves. This battlefield trail is contained within property cared for by the National Trust for Scotland, and is all that most visitors ever see. But the Battle of Culloden ranged over a much wider area than the present NTS site.

If you have the time, I can recommend the Culloden Battlefield Trail, a 9km (roughly 5.5 miles) circular walk made by connecting public footpaths and rights of way through Culloden Wood. The Trail connects visitors to several historic sites not part of the normal battlefield visiting experience.

The Cumberland Stone, mentioned above, forms part of the Trail, but within the Woods are three more sites. The first is St Mary's Well, an ancient 'clootie well'. The link to St Mary is an odd one, for the well is called Tobar na Coille in Gaelic, which translates as 'well of the wood'.

The well is also known as Tobar n'Oige, or well of youth, suggesting that its water was thought to dispel the effects of ageing. Its proximity to the battlefield led it to be sometimes called Culloden Well.

The well consists of an odd, circular wall over head height, with an opening on one side. Within the wall is a shallow basin where the water rises. It then runs out a stone-lined channel through the opening in the wall.

You can't help but notice that tree branches near the well are tied with brightly coloured pieces of cloth, called clooties. Tradition says that you should walk around the well three times in the direction of the sun, drink from the well, then dip a clootie in the water, rub it on an afflicted body part, and tie the rag to a branch. The clootie had to be an organic material such as wool or linen, which would break down over time. As the clootie disintegrated, so too did the illness.

As far as I know, there is no tradition tying the well directly to the battle, though it seems highly likely that soldiers would have used it to drink during the conflict. 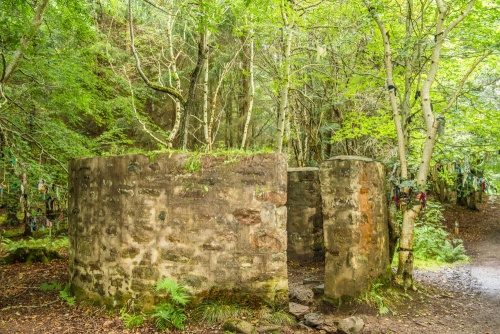 A very short detour off the Culloden Battlefield Trail from St Mary's Well brings you to the Lord President's Seat, a large, flat stone set against a tree trunk at the closest end of a railway bridge. It is named for Duncan Forbes, Lord Culloden (1685-1747) who served as Lord President of the Court of Sessions.

Forbes used to come here with his wife to admire the view of the Moray Firth. That was before the stone was moved to make way for the railway bridge, and, one suspects before the surrounding trees grew up to obscure the view! 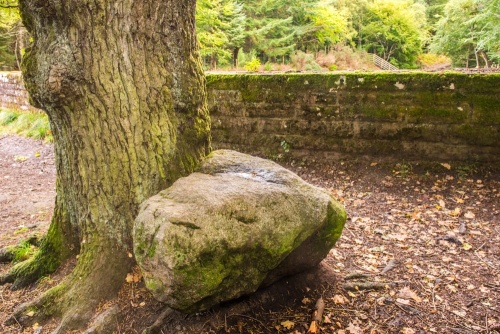 Return to the Trail after visiting the Lord President's Stone and follow the trail through Culloden Wood, now a Forestry Commission managed woodland. After a mile, you come to a cleared area where off to the left of the path you will see a large boulder known as the Prisoners' Stone. The boulder is irregularly shaped and measures about 12 feet wide and 12 feet long, and stands roughly 6 feet high.

A tragic tale clings to the stone, for it was here on Thursday, 17 April 1746, the day after the battle, that 17 Jacobite prisoners were brought. They were lined up against the stone by Cumberland's soldiers and shot to death.

Another version of the story says that the Jacobites were wounded and taken prisoner at the close of the battle. They were held for 3 nights at Culloden House, then loaded into a cart and driven to the stone where they were lined up and shot at point-blank range. The government soldiers then used the butts of their rifles to club the heads of the prisoners, just to make sure they were dead.

Despite this terrible treatment, it seems that one Jacobite named Fraser managed to escape. This story was apparently told to his son by the man who drove the cart from Culloden House to the Prisoners' Stone, and his son handed the story down to his descendants.

It will take from 2-3 hours to follow the extended Culloden Battlefield Trail, depending on how quickly you walk and often, like me, you stop to take photos. 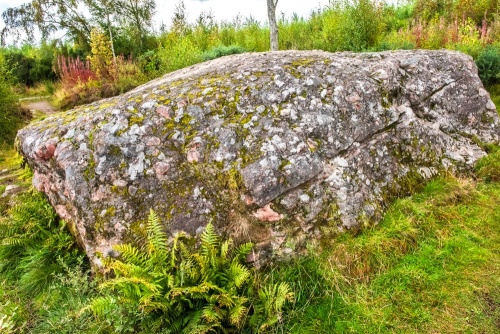 There is a very good modern visitor centre, which our family enjoyed. There are displays giving the background to the battle, the course of events, and information on Highland culture. Children - and adults - can dress up in Highland costume; our 5-year-old daughter loved that part!

Note that there is a charge to explore the visitor centre but you can walk around the battlefield itself for free.

I found Culloden fascinating from a historical viewpoint, but at the same time poignantly moving and unutterably tragic. Trails lead here and there across the almost featureless moor, and you suddenly find yourself coming unexpectedly upon a marker that tells of this or that valiant last stand or heroic death. Parts of the trail can be wet and muddy, so good waterproof footwear is essential.

The fields are still, almost barren in places, yet it is not hard, especially if the weather is grim and grey, to imagine the sound of the battle all around you. This is a place for people to explore their Scottish roots; to feel a connection with the past.

If you have time, I recommend the extended Battlefield Trail, which creates a circular loop of over 5 miles through Culloden Wood.

Less than a mile away from Culloden is Clava Cairns, a wonderful Bronze Age burial complex, and one of the best-preserved prehistoric sites in Scotland. 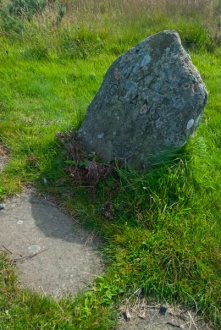 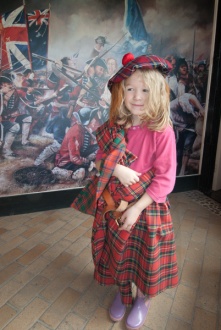 Dressing up as a 'Highlander'
in the visitor centre 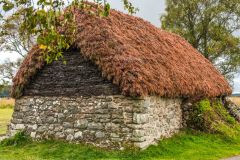 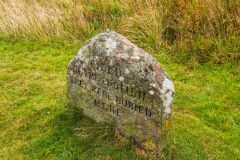 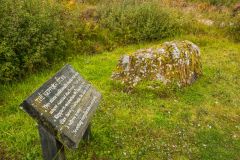 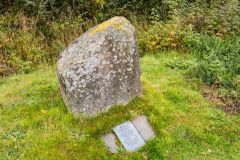 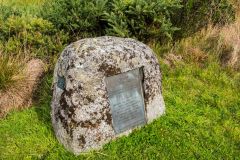 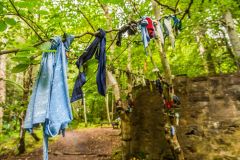 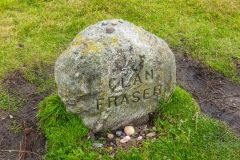 Nearby accommodation is calculated 'as the crow flies' from Culloden Battlefield. 'Nearest' may involve a long drive up and down glens or, if you are near the coast, may include a ferry ride! Please check the property map to make sure the location is right for you.

More self catering near Culloden Battlefield >> 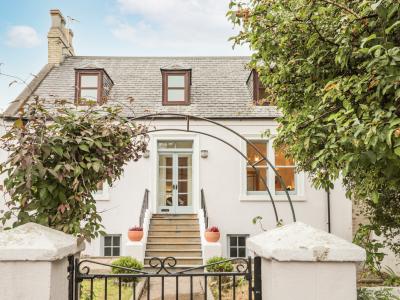