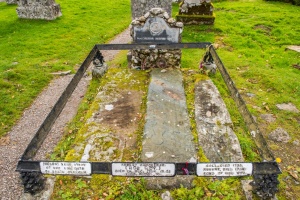 Robert MacGregor was born at Glen Gyle, at the western end of Loch Katrine, in the Trossachs region of Central Scotland. His popular moniker 'Rob Roy' comes from the Celtic for 'Red Robert', a reference to his red hair. His father was Donald MacGregor, and his mother was Margaret Campbell. At that time the MacGregor clan was 'proscribed', which meant that no one was allowed to use the name MacGregor or wear the clan tartan.

In 1693 he married Mary MacGregor at Glen Arklet, and together they had four sons, James, Ranald, Coll, and Robin. The site of the building in which they were married can still be seen on the B829 just east of Inversnaid.

Rob fought with his father Donald in support of the Catholic James Stewart in his struggle with the Protestant king of England, William of Orange. Donald was captured and imprisoned and Rob's mother died while Donald was captive.

After the cessation of struggles, Rob turned his hand to cattle. In a nutshell, he stole cattle and ran a protection racket, offering to protect the herds of others for a fee. This makes him sound like a Chicago gangster, but it is important to remember that the customs of the time were quite different from our own; cattle were considered common property, so taking them was not a crime, and the protection racket, as I called it earlier, was a common and very respectable way of making a living. 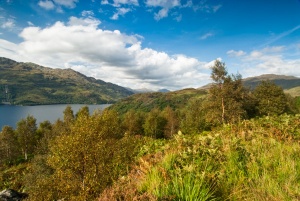 Things began to unravel, however, when Rob Roy borrowed money from the Duke of Montrose to expand his herd. Here is where the story gets murky. One version is that Rob Roy stole the money. Rob Roy's version was that his chief herdsman absconded with the coins.

Whatever the truth, the money was gone, there were no cows to show for it, and Rob Roy was unable to repay the loan. As a result of this episode, Rob Roy was declared an outlaw. He fled from his home at Inversnaid, leaving his wife, Mary, and their children.

Montrose's men descended on Inversnaid, burned Rob Roy's house to the ground and forced his family to leave. Later tales suggest that Mary MacGregor was raped, though these tales may have been coloured by later romanticized accounts.

From this point on Rob Roy was a thorn in the side of the Duke of Montrose and the forces of the law sent to find him. He roamed the hills of Loch Lomond and the Trossachs like a sort of Scottish Robin Hood. On one occasion he abducted the Duke's factor and held him on an island in Loch Katrine. Finally, in 1722 he was captured and imprisoned for five years. 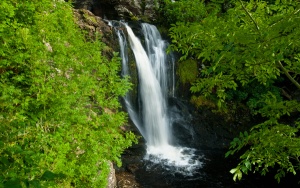 It was during his captivity that the legend of Rob Roy started to outstrip the reality. Author Daniel Defoe (Robinson Crusoe, Journal of the Plague Years) wrote a highly coloured account of his life in 'Highland Rogue' (1723).

As a result, Rob Roy became a celebrity in his own lifetime. The popularity of Defoe's account may have led King George I to issue a pardon and free Rob Roy in 1727, just when he was due to be transported abroad. He returned to the Trossachs and lived at Inverlochlarig, at the western end of Loch Doine. He died in 1734 and was buried in the churchyard at Balquhidder. Later, Mary and his sons Coll and Robin were laid beside him.

In some ways, the story of Rob Roy MacGregor's life has come to represent the struggle of the Highland clans for recognition and fair treatment by a largely English aristocracy. Rob Roy's popularity was assured when in 1817 Sir Walter Scott wrote a popular novel based on his life, entitled simply, 'Rob Roy'. Poet William Wordsworth also memorialized him in verse.

More recently, many readers will be familiar with the popular 1995 film 'Rob Roy' starring Liam Neeson in the title role. Though based on the facts, the events portrayed in the film certainly skewed things to portray Rob Roy in the most sympathetic light possible. 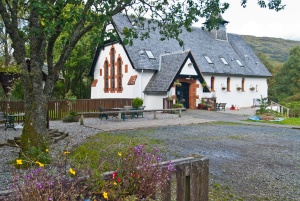 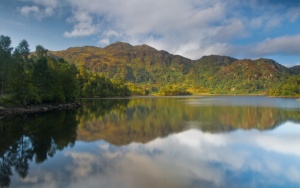 The Trossachs region is full of places associated with Rob Roy. Visit his grave at Balquhidder, or the site of his final home at Inverlochlarig. See the cave where he is reputed to have hidden near Inversnaid, and climb to the viewpoint called 'Rob Roy's View' overlooking Loch Lomond.