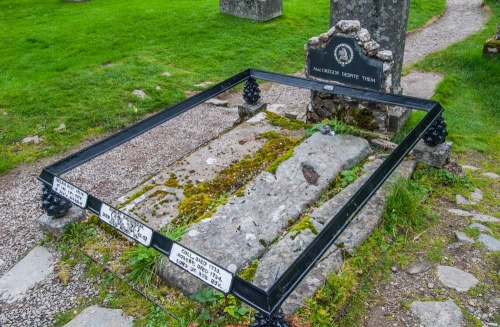 'MacGregor Despite Them'; Rob Roy's grave at Balquhidder

Balquhidder is little more than a scattered hamlet, yet it draws visitors from across the world because of its association with Rob Roy MacGregor. The intrepid outlaw is buried in the churchyard beside his wife, under the crumbling ruins of the old 17th-century church. Or is he?

Rob Roy (1671-1734) definitely lived the last years of his life in Balquhidder Glen. In 1734 he argued over ownership of some land with his neighbour John MacLaren of Invernenty. The pair fought a clan duel in the field directly south of the church. Rob Roy lost the fight and died of his wounds, thus ceding the lands to the MacLarens, who still own them today.

Here is where history gets murky. Parish records do not record a funeral. A newspaper account in the Caledonian Mercury on 9 January 1735 tells of Rob Roy's death but makes no mention of a funeral. Early Victorian accounts, written a century later, refer to a funeral on New Years Day at Balquhidder.

However, Rob Roy's gravestone is much older, and the railings are more recent. A local tradition says that Rob Roy was buried in the MacGregor burial ground on the island of Inis Cailleach on Loch Lomond. 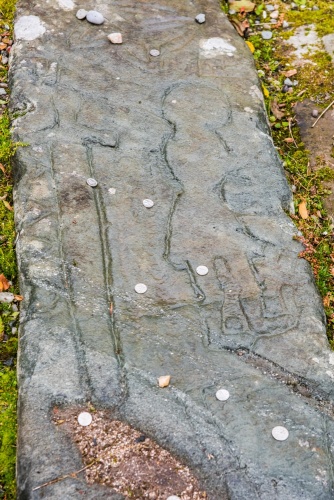 A trail called Bealach nan Corp, or Pass of the Corpses, links Balquhidder to Loch Lomond. This route was often used to carry MacGregor dead to their original homeland, so it makes perfect sense that Rob Roy would have been taken to Loch Lomond rather than be buried here in Balquhidder where he fell. Another tradition suggests that Rob Roy was buried at Glengyle on Loch Katrine.

Rob Roy's grave is simple, with a low iron railing, and you can get as close to it as you wish. The inscription at the head of the grave says it all; 'MacGregor despite them'.

Beside are the graves of Rob Roy's wife and two of their four sons, Coll and Robin. It seems likely that the gravestones were reused, for they appear to be of a much earlier date than the death of the MacGregors would indicate.

The story of Robin MacGregor is a strange one. He killed a MacLaren of Invernenty in a land dispute but escaped punishment, but later he was found guilty of kidnapping a wealthy widow and was hanged in Edinburgh. He was brought back to Balquhidder in ceremony and laid in the grave of his brother Coll. But again, there is a mystery, for the very handy information panel erected by Stirling Council beside the churchyard suggests that Robin would more likely have been buried in Edinburgh where he died. 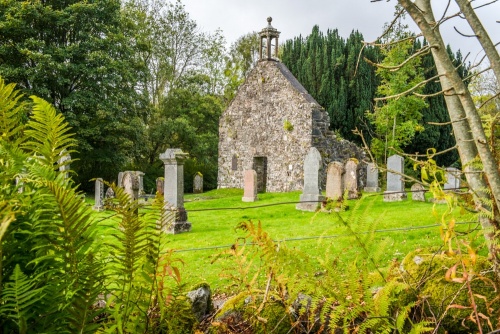 Legend tells that oldest church here was built by a Celtic abbot named Labhran on the grave of St Angus, a 7th or 8th-century monk who built an oratory, or cell, in the field below the church. Clan MacLaren took their name from Abbot Labhran (MacLabhruinn). Ever since that time the MacLaren Chiefs have been buried inside the Old Kirk at Balquhidder.

A newer kirk was built in 1631 by David Murray, Lord Scone, whose initials can be seen above the door.

This is the church that Rob Roy would have attended - if indeed he attended church at all, which we do not know. One of the most famous vicars of Balquhidder was Robert Kirk (see Aberfoyle), and Kirk's wife is buried here. Lord Scone's church is now little more than crumbling walls, a victim of damp and decay. 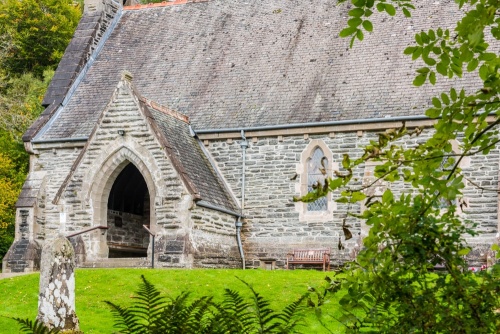 When the call went out for Highlanders to follow Bonnie Prince Charlie in the ill-fated 1745 rebellion, one of those to answer the call was the Stewart chief of Glen Buckie. On his way to join the Prince, Stewart reached Leny, where he begged shelter from Buchannan of Leny. When morning came, Stewart was found lying in his bed, a pistol in his hand, and a bullet hole in his skull.

Buchannan was executed for the crime, though he protested his innocence, and Stewart was laid to rest in Balquhidder churchyard. When the new church was built here in 1855 Stewart's skull was unearthed, with a bullet still loose inside it.

In 1855 the new building was built on a small rise just above the older church. The church was built by David Carnegie, laird of Stronvar, whose grave and those of his family lie in the ruins of the old church.

Inside the Victorian building, the most immediately striking thing to meet your gaze is the font. This is a huge, rough stone bowl, which may date to the days of St Angus, or possibly even to pre-Christian times. The bowl was found when the 1631 church was demolished. It had been built into the wall of the church. 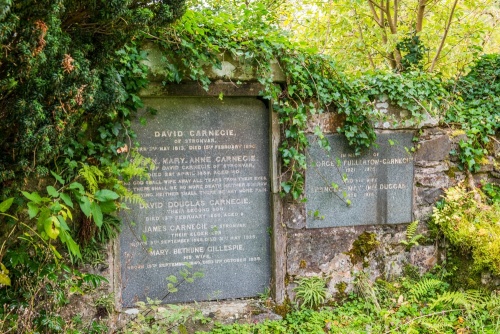 Standing against the north wall of the church is another historic relic, called the St Angus Stone (Clach Aonghais). This is believed to have been an original grave marker on the tomb of St Angus. The surface of the stone bears a carving of a religious figure carrying a chalice.

There is much more to Balquhidder than Rob Roy's grave, however. Just a short walk through the woods behind the church brings you to a lovely little waterfall on Kirkton Burn. It's a beautiful spot, though certainly not a spectacular cascade. But the best is yet to come.

Take a fork in the path back to the church, and begin to climb the slopes above the village. The way is generally easy, and if you come in spring or summer you will see wildflowers growing on the hillsides, and rowan trees showing off their berries.

A climb of some 20 minutes brings you to ‘Creag an Tuirc’ (Rock of the Boar). A cairn marks the spot where Clan MacLaren assembled in times of trouble. When danger threatened the clan, runners would spread the word to all the clansmen, who would gather their weapons and make haste to reach this spot high on the slopes over Balquhidder. 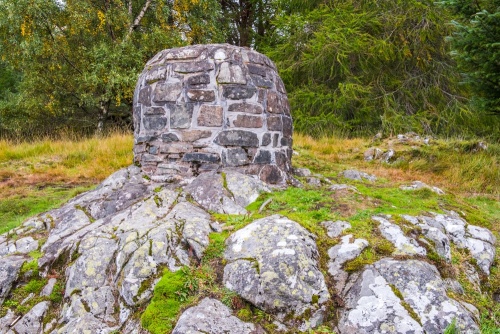 The Battle of Balquhidder

In the early 15th century the MacLarens rallied to protect their clan lands from an attack by the Buchanans of Leny. The battle had its origins in an incident when a single MacLaren was returning home carrying salmon purchased at St Kessog's Fair in Kilmahog (presumably on 10 March, the saint's feast day).

A group of Buchanans taunted the man and hit him in the face with his own fish. The MacLaren challenged them to appear at St Angus Fair in Balquihidder in August when he would not be alone. The Buchanans showed up at the fair only to discover the entire MacLaren clan assembled for a fight. They called for reinforcements and more Buchanans rushed to their clansmen's side.

Now the MacLarens were outnumbered, and things looked bleak. Members of Clan MacGregor were watching the combat unfold, and they offered to help the MacLarens but only if the MacLarens gave them the right to enter Balquhidder kirk before anyone else - a right held by the MacLarens.

The MacLarens had no choice but to agree. The MacGregors joined the fight, which took place on the hillside east of the kirk, under the Creag an Tuirc. According to legend, not a single Buchanan was left alive.

The MacLarens are still gathering on the Rock of the Boar. When we visited last we met a couple of Canadians from Nova Scotia named MacLaren climbing the path to the viewpoint. They were revisiting their ancestral lands, like a pilgrimage to encounter their roots, and a visit to Creag an Tuirc was an essential part of their 'coming home' experience. 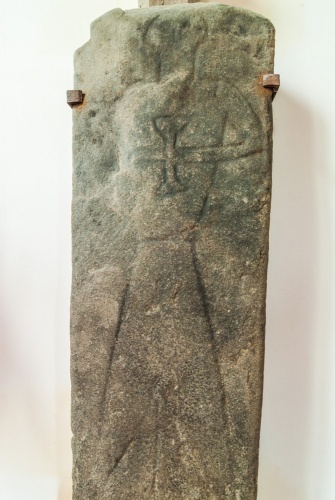 The St Angus Stone, inside the church

The view across the glen and to the west along the length of down Loch Voil is simply spectacular and makes the climb seem very worthwhile. Sit on the bench set beneath the cairn and soak in one of the Trossachs' best views. You can even look down several hundred feet into the churchyard and get an eagle's eye view of Rob Roy's grave.

Two popular walking trails lead through or near Balquhidder. The Coast to Coast Walk from Oban to St Andrews and the Rob Roy Way, which stretches from Drymen to Pitlochry, are both easily accessible from the village. 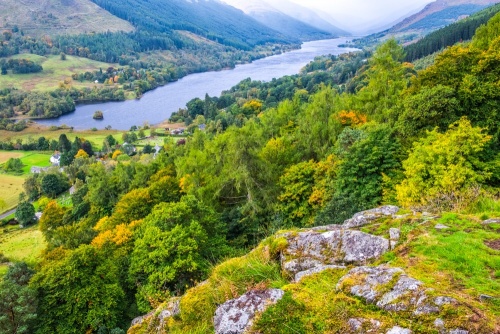 Loch Voil from Creag an Tuirc

Most people come to Balquhidder, view Rob Roy's grave, and return to the A84 at Kinghouse. But if you do that, you'll miss a treat. Instead, carry on up the narrow road that leads along the northern shore of Loch Voil to Loch Doine. The scenery is spectacular, though the way is narrow, and you'll have to keep a close eye out for oncoming traffic. To the north, the hills rise to the Braes of Balquhidder, made famous in the song of the same name by Robert Tannahill.

The road ends just beyond the western tip of Loch Doine, just beyond where a traditional burial ground of Clan MacLaren is situated above the shore. If you carry on to the very end of the road you will find Inverlochlarig, where a farmhouse stands on the site of Rob Roy's house.

This is such a peaceful, timeless spot, the hustle and bustle of the world at large seem unimportant and very far away. There are several hotels and rental cottages along the shores of Balquhidder, making it a nice place for a peaceful holiday.

Nearby:
Killin and the Falls of Dochart

More self catering near Balquhidder

More bed and breakfasts near Balquhidder