Jane Austen was born on 16 December 1775, at Steventon, Hampshire, near Basingstoke. She was the seventh of eight children born to Reverend George Austen, vicar of Steventon, and his wife Cassandra 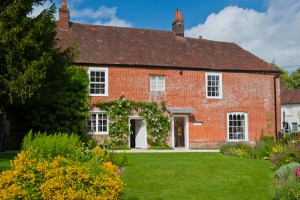 Jane was educated at home, where her father lodged and tutored boys. The Austen house was filled with books, and Jane was encouraged to read and write. Her major childhood enjoyment was writing and performing plays and charades with her elder sister Cassandra.

She poured herself into these writing projects with such enthusiasm that she had completed her first novel, Love and Friendship, at the age of just 14.

The pleasant countryside life of Steventon gave Jane the material for her novels Sense and Sensibility, Pride and Prejudice, and Northanger Abbey, all written (but not yet published) in her early twenties.

In 1801 however, George Austen resigned his living in Steventon abruptly and took his wife and two daughters to Bath. Jane disliked town life intensely and missed her Hampshire home and friends. Her personal life suffered setbacks during this period, also; she fell in love, but her suitor died. Then she accepted a marriage offer from wealthy Harris Bigg-Wither, only to renounce the engagement the next morning.

When George Austen died suddenly in 1805, the family moved again, this time to Southampton, where they stayed with Jane's brother Frank. Jane wrote little or nothing during this period of her life. In 1809 Jane's brother Edward gave them a permanent home at Chawton, in Jane's beloved Hampshire countryside.

It was at Chawton that Jane Austen found the space and time to return to her writing. She revised and published Sense and Sensibility (1811) and Pride and Prejudice (1813), followed by Mansfield Park (1814), and Emma (1816). She also revised Northanger Abbey and finished Persuasion, but these were not published until 1818.

By that time Jane Austen was dead, a victim of a long illness, believed by many historians to have been tubercular kidney disease. In her final years, the disease worsened to the point that she moved to Winchester to be close to her doctor. It was at Winchester that Jane Austen died in the arms of her beloved sister Cassandra, on July 18, 1817, aged only 41. She is buried at Winchester Cathedral.

After her death, Jane's final two works, Northanger Abbey and Persuasion, were published. These were the first books published under her own name; all of the novels published during Austen's lifetime were simply described as being "By a Lady".