Beware the Jabberwock, my son!
The jaws that bite, the claws that catch! 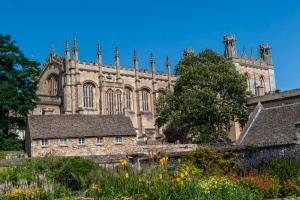 Lewis Carroll was born as Charles Dodgson on 27 January 27 1832 at Daresbury, Cheshire, where his father Charles was vicar. Charles attended Richmond Grammar School (Yorkshire) after his family moved to Croft. He wrote a series of family magazines throughout his childhood, containing poetry, drawing, and prose.

In 1846 Dodgson attended Rugby School, from which he graduated to Christ Church College, Oxford. In 1854 he was awarded a degree in mathematics, and the following year he began work as a Lecturer at Christ Church in that subject. During that time he continued to write comic verse, some of which was published in the Comic Times.

In 1856 Dodgson submitted a parody to the magazine The Train. The editor of The Train, Edmund Yates, chose the pseudonym "Lewis Carroll" from a list of possible pen names submitted by Dodgson. In that same year, Carroll first met Alice Pleasance Liddell, daughter of the Dean.

Dodgson was an enthusiastic photographer, at a time when the art was young. He took photographs of Alfred Tennyson, and had four of his prints exhibited at the annual exhibition of the Photographic Society in London.

He continued to write, and published several short stories and novels, in addition to works on mathematics, such as A Syllabus of Plane Algebraic Geometry.

On July 4, 1862 (a momentous date in English literature!) Dodgson took a boat trip with Alice Liddell and several others to Godstow. On this trip Dodgson passed the time by telling the children a nonsense tale. He later wrote down the story, calling it Alice's Adventures Underground. When he finished the book in 1863 his friends and family urged him to publish it.

The book was renamed Alice in Wonderland and published in July 1865. It was immediately withdrawn from circulation due to poor print quality. A second, corrected, edition was published in November, at roughly the same time as Dodgson's mathematical treatise The Dynamics of a Particle.

In 1867 Dodgson began a new children's series, Sylvie and Bruno, beginning with Bruno's Revenge, in Aunt Judy's Magazine. In that same year he began a sequel to "Alice" entitled Through the Looking Glass and What Alice Found There.

When Dodgson's father died in 1868, he purchased "The Chestnuts", at Guildford, Surrey, where his family moved. He himself moved into quarters at Tom Quad, where he remained for the rest of his life. There he continued his experiments with photography, and went so far as to have a special photographic studio built on the roof of Tom Quad.

Dodgson was a prolific writer, contributing political pamphlets, mathematical works, and children's tales to a variety of magazines. In 1881 he gave up his mathematics Lectureship to devote himself full time to his writing. The year 1889 saw the final episode of Sylvie and Bruno.

"Lewis Carroll" had mixed feelings about his lasting fame as an author of children's stories. He preferred to think of himself as a man of science and mathematics who also happened to write nonsense.

Charles Dodgson died of bronchitis on January 14, 1898. He is buried in Mount Cemetery, Guildford, Surrey, near the home he bought for his family.