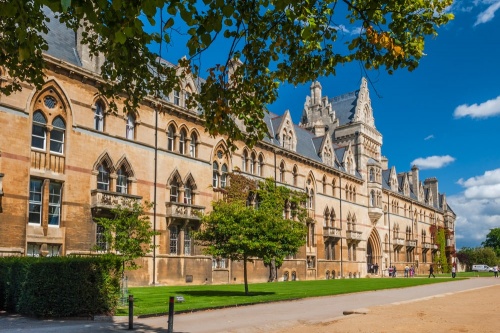 Christ Church is the largest of the Oxford University colleges. Its grandeur owes much to the pride of one man, its founder, Cardinal Thomas Woolsey.

Wolsey was himself a former member of Magdalen College. He became Master of Magdalen in 1500, but that was merely a brief stopover on his meteoric rise to power as chief advisor and chaplain to Henry VIII.

In 1525 Wolsey, also the founder of Hampton Court Palace, acquired the Augustinian priory on the site of St. Frideswide's abbey (see Anglo-Saxon Oxford). Wolsey had the site cleared, and began construction of a grandiose complex of buildings around a green quadrangle (now known as Tom Quad). By the time of Wolsey's death in 1529 the college was still incomplete - not surprising considering the scope of Wolsey's project.

The college was originally called Cardinal College, but after Wolsey's death Henry VIII took over the college and it was renamed Henry VIII's College.

In 1545 the dean of the college, "gave" the college and all its possessions to the king. On the same day the Bishop of Oxford also "gave" the see of Osney to the crown. Henry then combined the see and the college in a unique establishment he called Christ Church. The church of St. Frideswide in one stroke became the chapel of Christ Church and the Cathedral of Oxford. 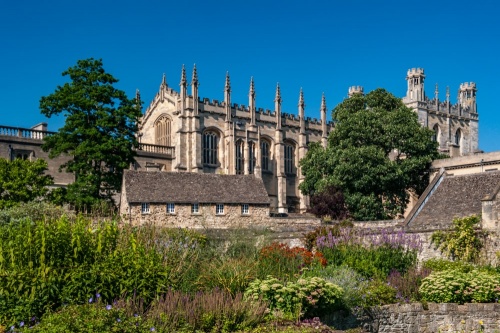 The dining hall and fellow's garden

The royal connection with Christ Church continued during the English Civil War. King Charles chose Christ Church as his residence. His court sat in the Deanery, and the royalist "Parliament" convened in the Great Hall. The king attended service in the church daily, sitting in the Vice-Chancellor's stall.

The king's cousin George Stuart, Lord d'Aubigny, was killed at the Battle of Edgehill and buried in the Cathedral in an unmarked grave, as were his two brothers, also killed early in the war. There are also a number of royalist monuments near the Becket Window in the Cathedral.

Parliament temporarily abolished the bishopric of Oxford after the Civil War, but this act was quickly overturned when the monarchy was restored.

One of the more famous alumni of Christ Church was the mathematician Charles Dodgson, known to most people as Lewis Carroll, author of Alice in Wonderland. Dodgson was a Student in mathematics at Christ Church for 48 years. He wrote "Alice" for Alice Liddell, daughter of the Dean of Christ Church. The New Library houses the best collection of Lewis Carroll's work anywhere in the world. 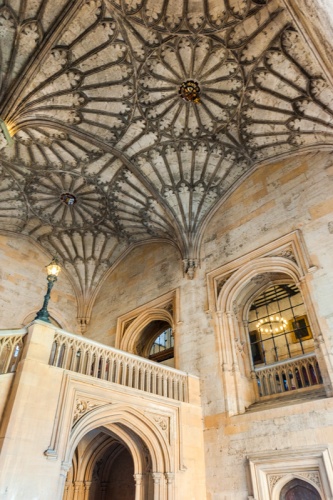 Although the original scope of Christ Church was grandiose enough, subsequent generations of Deans have added major architectural projects of their own. Most notable of these projects was built by Sir Christopher Wren, who was commissioned to create a tower atop the gateway into Wolsey's Great Quad. Wren completed the structure, dubbed Tom Tower, in 1682. It is now one of the most famous of Oxford's "dreaming spires".

In recent years most of the tourists who flock to Christ Church come not to see the historic college architecture or explore the cathedral, but to see places used in the filming of the popular Harry Potter series of films. Two places in particular draw Potter fans; the dining hall, which doubled as the Hogwarts dining hall in the films, and the staircase and balcony outside the hall where Ron and Hermione greeted Harry in the first film.

This part of the college can be extremely crowded with visitors. Harry Potter fans seem to spend less time exploring the rest of the historic buildings, so there are still plenty of quiet corners to enjoy.

Be aware that there is a charge to enter the college, and depending on the time of day and the season, there may be queues. The main visitor entrance is not through the Tom Tower on St Aldates, but through the southern facade facing towards Christ Church Meadows. 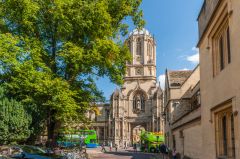 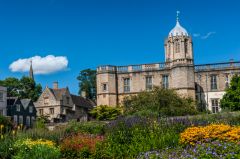 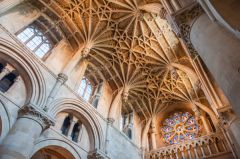 More self catering near Christ Church