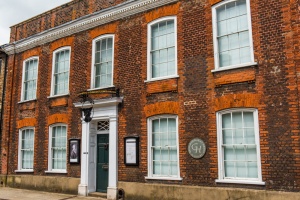 Thomas Gainsborough was born in 1727, the son of John Gainsborough, a cloth merchant living in Sudbury, Suffolk. It was not long before the younger Gainsborough showed a marked talent for art, and at the tender age of 13, he was sent to London to study.

For the next eight years, Gainsborough studied in London under the engraver Gravelot. He also became familiar with the Flemish style of painting which was then very popular with art dealers.

In 1746 Gainsborough married Margaret Burr, widely held to be the illegitimate daughter of the Duke of Bedford. Before he returned to Sudbury in 1748, Gainsborough produced his first well-known work, The Charterhouse.

Two years later he moved to Ipswich, where he had his first commercial success as a painter, completing many small portraits and two larger landscapes commissioned by the Duke of Bedford.

In 1759 the Gainsborough family was on the move once more, this time to the fashionable spa town of Bath, where high society congregated. It was in Bath that Gainsborough became truly popular as a portrait artist, concentrating on full-length, life-sized images.

During his stay in London, Gainsborough painted King George III and Queen Charlotte. Before his death in 1788, he turned from portraiture to pictorial compositions, producing in all some 200 landscapes in addition to his prolific output of about 800 portraits of the English aristocracy.

Gainsborough himself considered landscape painting to be his strong suit, although it is his portrait work that gives him lasting fame.

Gainsborough is unique as an artist in that he neither sought nor accepted students. Nor did he undertake the almost obligatory Grand Tour of Italy and France to study classical art and antiquities.

Some of Gainsborough's most popular paintings include "The Blue Boy", "The Market Cart" (Tate Gallery, London), "The Wood Gatherers", and "Robert Andrews and Mary, His Wife" (National Gallery, London).

Major works by Gainsborough in Britain can be seen at Waddesdon Manor (Buckinghamshire), The Tate Britain Gallery and National Gallery (London), and the National Gallery of Scotland (Edinburgh).