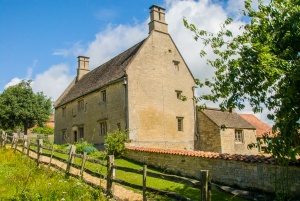 Isaac Newton was born on 4 January 1643 in Woolsthorpe, Lincolnshire (25 December 1642, according to the Old Style calendar). His father, also named Isaac, died before he was born. Isaac's mother Hannah remarried when Isaac was only two years old, and he was left in the care of his grandmother.

He was educated at Grantham Free Grammar School, where he showed no aptitude for study. His mother removed him from school and gave him the task of managing her estate, but at this, he also proved unfortunately inept.

He was allowed to return to school, and he must have improved his study habits, for his mother was persuaded to allow him to enter university at Trinity College, Cambridge.

Newton intended to study law, but his taste quickly turned to mathematics. He received his bachelor's degree in the spring of 1665, but then an outbreak of the plague forced the university to close, and Newton returned to his Lincolnshire home.

It was during this time of retreat that the famous incident of a falling apple gave Newton the first glimmerings of the ideas he later developed into his study of gravitational forces.

In the two years he spent in inadvertent exile from Cambridge, Newton made extraordinary strides in mathematics, creating the basis of modern calculus. He wrote De Methodis Serierum et Fluxionum in 1671, though it was not published during his lifetime.

When Cambridge reopened, Newton became a Fellow of Trinity College. His fresh ideas began to circulate among the leading mathematicians of the day. He also delved into astronomy and optics.

He was one of the first to argue that white light is actually composed of many different colours, and he constructed one of the first reflecting telescopes. He donated one of his telescopes to the Royal Society in 1672, and was named a full fellow of the society. Unfortunately, Newton quarreled with several of the leading scientists of the time, and was reluctant to publish his experiments and philosophies.

It was only under the urging of astronomer Edmund Halley (he of Halley's Comet fame) that Newton was persuaded to publish his ideas on physics and astronomy, Philosophiae naturalis principia mathematica (1687). In this work he first laid out his law of universal gravitation. The book provoked a storm of scientific argument and admiration.

Shortly after this, he was elected to Parliament as a representative of the university. In 1693 Newton suffered a nervous breakdown, and a few years later he became Master of the Royal Mint. He was elected president of the Royal Society in 1703, a position he held until his death. In 1705 he became the first scientist to be knighted for his work.

Newton remained suspicious of his fellow scientists, and protective of his ideas and his reputation. His final years were given over to a distasteful conflict with Liebniz, disputing who had invented calculus. He went so far as to appoint a supposedly impartial committee of the Royal Society to decide the issue, however, it seems clear that he himself wrote the committee's report in his own favour.

Isaac Newton died on March 31, 1727 (New Style calendar), in London, and he was buried in Westminster Abbey.

Web Resources:
Newton.org - a virtual museum of Sir Isaac Newton and the history of science.