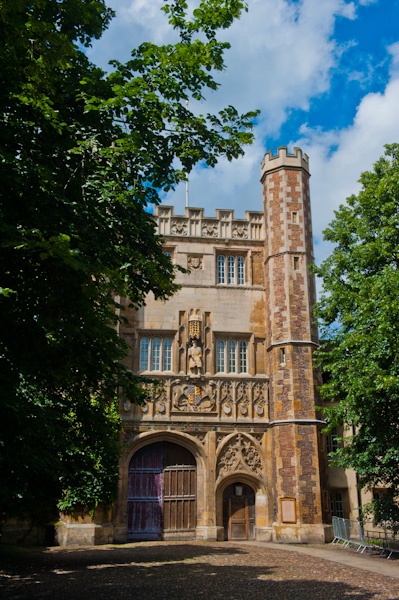 Henry VIII founded Trinity College in 1546 by joining together two existing colleges, King's Hall and Michaelhouse. Of the two, Michaelhouse was the older college, established in 1324 by Hervey de Stanton, Chancellor of the Exchequer under Edward II. The buildings originally held by Michaelhouse now form the south part of Trinity's Great Range. 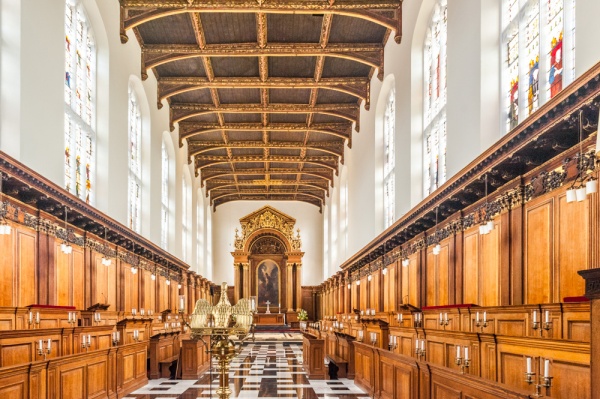 King's Hall, not to be confused with King's College, was founded in 1337, and its buildings now form the northern part of the Great Range at Trinity.

Henry VIII made sure that Trinity was well endowed, with gifts of land and former monastic estates. Trinity became one of the richest and most prestigious of Cambridge colleges, drawing to it the sons of many leading families.

Under Thomas Nevile, Master from 1593 to 1615, Trinity was expanded and its buildings unified to form the core of what we can see today. Nevile even paid for the building of Nevile Court out of his own pocket.

But it is Great Court that draws the immediate attention of visitors. It is the largest and most impressive court of any at Cambridge (and larger than any Oxford Quad, too). Nevile was the mastermind of Great Court; he demolished the old hall and erected the present building, notable for its lantern and wonderful hammerbeam roof. Nevile even had the clock tower dismantled and moved, brick by brick, to its present position by the chapel. 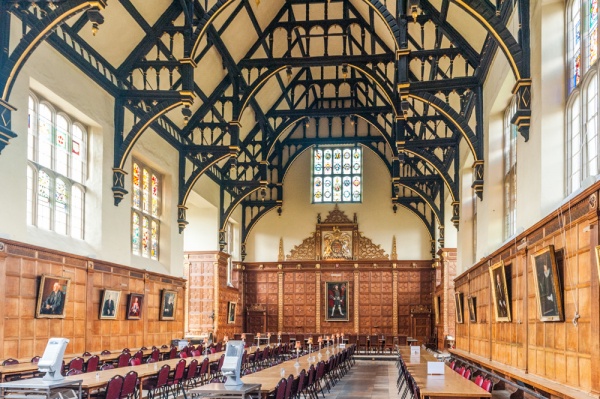 The Great Court is entered through an imposing brick gateway dating from 1535. Above the entry is an imposing statue of Henry VIII, regally holding a chair leg! It seems that students kept removing the original sceptre held by the statue, so college porters designed this unusual replacement.

Lord Byron, when he attended Trinity, was known to keep a bear in his rooms. He would occasionally lead the bear around the college on a chain.

Rumour has it that the apple tree outside the college gate is a direct descendant of the tree which dropped an apple on Isaac Newton's head, prompting him to evolve his theory of gravity. 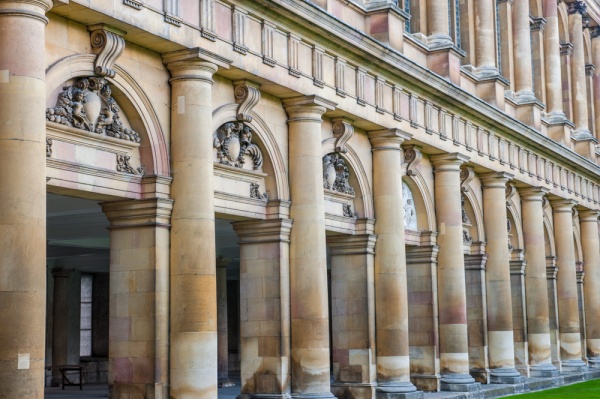 WREN LIBRARY
The Library at Trinity College, which faces into Nevile's Court, was built to a design by Christopher Wren and finished in 1695. Wren designed not only the overall structure but even took a hand in the furniture! He brought in Grinling Gibbons to carve the limewood decorative elements as well as the royal coat of arms at each end of the building. Busts of notable Trinity members dot the interior, including a full-length marble statue of Lord Byron originally intended for Westminster Abbey.

Library Exhibits
There are 6 exhibition cases in the Library, with rotating displays from the Library's collection of books and manuscripts. Almost always displayed is the Library's prized possession, an 8th-century copy of Epistles of St Paul, as well as an autographed version of Milton's poems, A.A. Milne's Winnie-the-Pooh, and Newton's annotated Principia.

Opening Details for the Wren Library
Entry to the Wren Library is free, but a charge applies to enter the college. If you want to visit just the library, enter by Queen's Road or Garret Hostel Lane.

More self catering near Trinity College