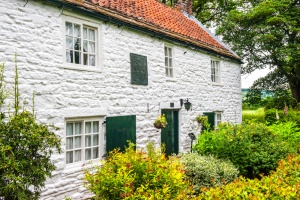 George Stephenson was born on June 9, 1781, in Wylam, near Newcastle-on-Tyne. His father Robert worked in the Wylam Colliery as a fireman, and the family's cottage was right beside the Wylam Wagonway. This wooden track took wagons from the colliery to the Tyne river for transport.

George was fascinated by machines from an early age. He took evening classes in reading and writing, even after he joined his father as a colliery worker. In 1802 Stephenson became an engineman, and soon after he married Frances Henderson. Together they had one child, Robert, but Frances suffered from consumption and died in 1806. Stephenson later married twice more.

Stephenson moved to Killingworth Colliery as an engineman, but his fascination with machines continued, and in his spare time he took apart the colliery engines to discover how they worked. So swiftly did he learn that he was appointed an engine wright for the colliery in 1812.

Stephenson developed a new safety lamp that would not explode when used near the highly flammable gasses found in the mines.

He also convinced the mine manager to experiment with steam locomotion. By 1814 he developed the Blucher, which was capable of pulling 30 tons up a grade at four miles per hour. His design was the first to successfully use flanged wheels running on rails.

Over the next several years Stephenson built a further 16 engines at Killingworth. The mine owners were so impressed with his accomplishments that they put him to work building an 8-mile railway from Hetton to Sunderland.

Stephenson was hired by the Stockton and Darlington railway to help build the line linking collieries at West Durham and Darlington with the River Tees. With his son Robert Stephenson, he formed Robert Stephenson & Company, the first locomotive building company in the world, headquartered in Newcastle. The first locomotive engine produced by the new company, called Locomotion, was finished in the fall of 1825.

The Stockton & Darlington line was officially opened on September 27, 1825. To rapt attention from crowds of onlookers, Stephenson guided the Locomotion along the 9-mile track in just under two hours.

Stephenson was hired by other railways, such as the Bolton & Leigh. But his big triumph came in 1829. The proposed Liverpool & Manchester railway directors held a trial to determine which locomotive to use for their railway. The winner also received the huge sum of £500.

The contest was held at Rainhill, and of ten engines entered, only five turned up and just three functioned well enough to take part in the Rainhill Trials. The winner was Rocket, produced by the Stephensons.

Stephenson went from strength to strength. He was chief engineer for the Manchester & Leeds, Birmingham & Derby, Normanton & York and Sheffield & Rotherham railways. He was constantly innovating, constantly improving his engines and the tracks.

He was so successful that he was able to purchase Tapton House, near Chesterfield, in 1838. He invested in coal mines, ironworks, and quarries, and also experimented with animal husbandry and stock breeding.

To visit:
National Railway Museum, York. Tells the story of railways in Britain from the Rocket to the present day.
George Stephenson's Birthplace, Wylmam, Northumberland