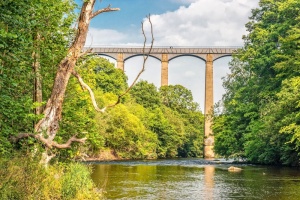 Thomas Telford was born near Westerkirk, Dumfries, Scotland, in 1757, the son of a poor shepherd. He apprenticed for a time to a stonemason in Langholm, and worked on the construction of Edinburgh's Newtown, before moving to London in 1782 in search of work. There he helped design and build Somerset House, but later moved to Portsmouth as manager of works at the dockyards.

A patron from Dumfries got him the post of Surveyor of Public Works for the County of Shropshire. In this capacity, he was responsible for the construction of the Ellesmere Canal in 1793, and the Severn Suspension Bridge at Montford (1790). This bridge was an engineering marvel, and it helped make his reputation as one of the greatest civil engineers in Britain. (For an argument, see Isambard Kingdom Brunel).

His success led to a government appointment to survey the roads in rural Scotland as part of a major transportation improvement scheme. His survey results were accepted and Telford was asked to oversee the construction of some 1,000 miles of roads and 120 bridges - a job which took him over 20 years to complete.

Also in Scotland, Telford worked on dock improvements in Wick, Aberdeen, Peterhead, Leith, and Banff, as well as the Caledonian Canal project linking a series of freshwater lochs with 20 miles of canals.

Telford's engineering horizons were not confined to Scotland; he worked on the Menai Suspension Bridge linking the island of Anglesey with the Welsh mainland, and on suspension bridges, roads, and canals throughout Great Britain. 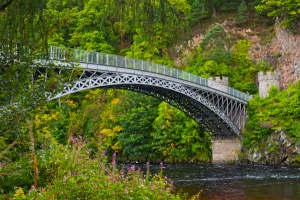 Telford did not invent the suspension bridge, but he was one of its chief proponents at a time when its use was a matter of debate. Telford himself must have had some doubts about the safety of his own designs, for he was given to lengthy prayers on the days the chains were scheduled to take the weight of the bridge.

His use of the cast-iron arch bridge at Craigellachie in Scotland and the Waterloo Bridge in Wales turned the structure into a form of art. In 1818 Telford helped found the Institute of Civil Engineers, and he served as its first president.

Thomas Telford died on September 2, 1834, and is buried in the nave of Westminster Abbey, London.