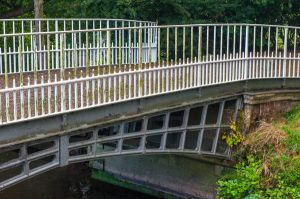 Cantlop Bridge
A 19th-century cast-iron bridge across Cound Brook. The bridge was probably designed by the influential engineer Thomas Telford. If Telford did not personally design the bridge he certainly checked and approved the design. Telford was one of the first to realize the possibilities of cast-iron in construction and was able to use the material to create lighter bridges with less material.

Cantlop bridge is built in a single span. It was originally a road bridge on the main Shrewsbury to Pitchford route but has since been closed to regular road traffic in the interests of preservation. A modern bridge was built beside Telford's bridge to take traffic.

The bridge was built in 1813 as part of a far-reaching program of public works meant to improve transportation links in Shropshire. Telford was the County Surveyor for Shropshire from 1787-1834 and was responsible for the design and implementation of a great many major engineering works, particularly bridges. Cantlop Bridge is the last of Telford's network of Shropshire bridges to still stand where it was built.

It is not easy to find Cantlop Bridge. For a start, it isn't in Cantlop, but on the minor road north towards Weeping Cross and the A458. The bridge is off the east side of the road (heading south towards the Cantlop turnoff), and there is a small layby large enough for 2-3 cars. However, there were no obvious signs near the bridge, and we drove right past it before we thought, 'Hey! That looked like a small iron bridge. Perhaps its Cantlop Bridge?' and turned around.

There is an information panel explaining briefly the historical background to the bridge, but the site could really do with some more obvious signs to encourage people to visit. 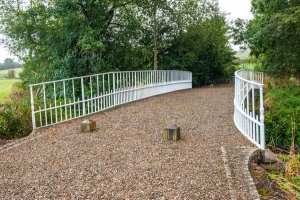 Walking across the bridge 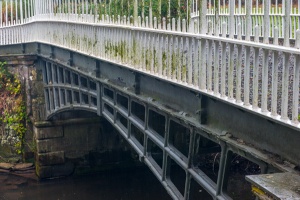 A closer look at the ironwork design 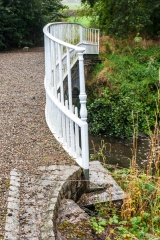 More self catering near Cantlop Bridge >>