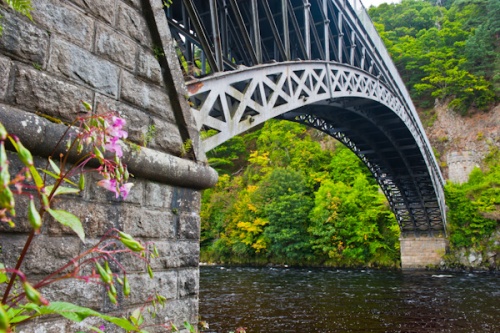 The lovely 19th century cast iron Craigellachie Bridge spans the River Spey. It was designed by famed Scottish engineer Thomas Telford, who was responsible for so many other 'firsts' in Britain. Telford's bridge is the oldest surviving cast iron bridge in Scotland and was widely regarded as an engineering triumph when it was built in 1814.

Telford had to design a bridge to cross the Spey in a single span, to allow for sudden periods of violent flooding to which the Spey was prone. So he could not risk using a traditional stone design with short arches carried on columns, like his famed aqueduct at Pontsycyllte in Wales.

To counter the threat of floods, Telford designed a single span bridge with an arch fully 46 metres across (150 feet). He used cast iron to create a lightweight frame of interlinked braces.

The bridge was cast at Plas Kynaston ironworks in Wales, then went on a long journey by canal, ship, and finally by wagon, to reach its destination at Craigellachie. The total cost for the project was estimated at £8200, a huge sum for the time. 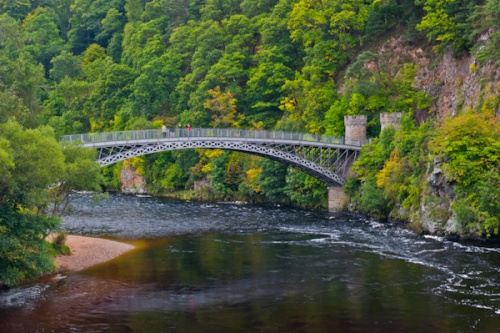 The view from the modern road bridge

A local story - unsubstantiated I must hasten to add - says that the bridge was intended for a different project. This is said to account for the sudden and very sharp bend in the old road at one end of the bridge.

The bridge runs parallel to the modern road bridge. In fact, the walkway on the modern bridge gives you one of the best views of the old bridge. However, for an even closer view, there is a small parking area by the riverside and a short walk to the bridge itself.

You can walk across the bridge to the far side, though once you do there's not much to do but turn around and walk back! You can also walk right to the base of the bridge from the parking areas or from Craigellachie village itself (take the path at the riverside end of the Scottish Power substation).

The bridge is very poorly signposted; I wouldn't have found the parking area if I hadn't been specifically looking for it. The lane leading to the bridge and parking area is off the A941 immediately south of the modern bridge, on the west side (away from the village). 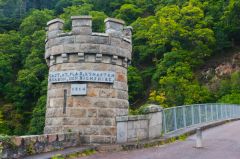 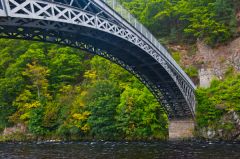 More self catering near Craigellachie Bridge

Self Catering near Craigellachie