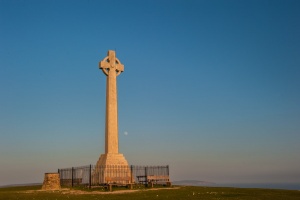 Alfred Tennyson was born on August 5, 1809, in Somersby, Lincolnshire, where his father George was a clergyman. Young Alfred began writing poetry at a very early age and published his first work "Poems by Two Brothers" at the tender age of sixteen.

In that same year of 1827, Tennyson entered Cambridge University, where he befriended Thackery and produced his second collection, "Poems, Chiefly Lyrical". He also met Emily Selwood, to whom he became engaged in 1839.

The Selwood family objected to the engagement, partly because of Tennyson's lack of money, and partly because his brother Charles was unhappily married to Emily's sister Louisa.

Tennyson poured his energy into writing, and his "Poems" of 1842 made him extremely popular. He let his doctors convince him to give up writing for a time because of his poor health, but the respite was temporary. In 1847 "The Princess" was another success, and two years later Tennyson married Emily in a secret ceremony.

When William Wordsworth died, the post of Poet Laureate became available. On the strength of Prince Albert's appreciation for Tennyson's In Memorium, he was given the position. One of his most popular and enduring works, The Charge of the Light Brigade (1854), was just one of Tennyson's many poems which dealt with famous events in English history.

When Prince Albert died in 1861 Tennyson's epic "Idyll's of the King" was dedicated to him. The Idyll's, a retelling of the tale of King Arthur, were immensely popular with readers and equally unpopular with reviewers.

In his later years, Tennyson tried his hand at plays, but his efforts were not well received. Queen Victoria offered him a baronetcy on several occasions, but the shy Tennyson was not induced to accept until 1884.

Alfred, Lord Tennyson, died on October 6, 1892. To honour his request, his poem "Crossing the Bar" is always the last piece printed in any collection of his poems.

His half-brother was Aethelred the Unready