Signs From The Spirit World 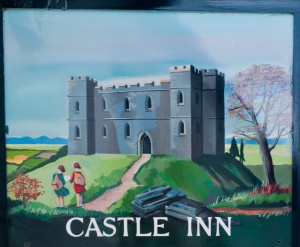 loves an “Olde Worlde” pub with its oak beams, horse brasses and roaring log fires. Nevertheless, no matter how old the pub itself, the name on the sign outside is probably the most historic thing about the place.

The idea of the pub sign came to Britain at the time of the Roman invasion. Wine bars in ancient Rome hung bunches of vine leaves outside as trading signs but when the Romans came here, they found precious few vines in the inhospitable climate. Instead, they hung up bushes to mark out the inns and the names Bush or Bull & Bush still survive.

What’s in a name?

It would be centuries before the first recognisable pubs opened. Religious houses ran the earliest true inns to cater for pilgrims and knights on their way to the Crusades in the Holy Land. Ye Olde Trip to Jerusalem, whose cellars are carved from the rocks beneath Nottingham Castle, is just such an example. Established in 1189, it claims the title of the oldest pub in England and was a stopover point for forces on their way to meet with Richard the Lionheart.

Other signs on this theme are the Turk’s Head, Saracen’s Head and Lamb & Flag – the lamb representing Christ and the flag the sign of the crusaders.

Even after the Dissolution of the Monasteries in the 16th Century, some of the names denoting religious connections survived, such as the Mitre, the Ship (symbolising the Ark) and the Anchor (the Christian faith).

However, many of the landlords thought it more politic to show allegiance to the monarch and hastily adopted titles like the King’s Head or the Crown. Henry VIII who ordered the Dissolution is, unsurprisingly, the most popularly depicted monarch.

Heraldry has been a recurrent theme, the Black, White, Red and Golden Lions have formed part of the royal coat of arms since the time of the Norman Conquest. The Unicorn was in the Scottish arms, the Red Dragon in the Welsh and the White Horse in the Hanoverian. The Rising Sun was the badge of Edward III. Local gentry often had pubs on their land named after them or parts of their cognizance were taken.

Anyone who caught the public imagination was likely to be immortalised such as Lord Nelson or Wellington and even loveable rogues like Dick Turpin get a mention. 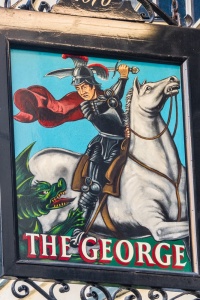 One of the most affectionate tributes is reserved for the Marquis of Granby, Commander in Chief of the British army. After the Battle of Warburg, he bought pubs for all his non-commissioned officers. His generosity ruined him however and he died in 1770 leaving crushing debts of 37,000 pounds.

In the days of a largely illiterate population, pictorial signs were an essential way of advertising the inn or the type of entertainment on offer inside. Any pub called the Cock Inn or the Cock Pit would once have been a venue for cockfighting. Ye Old Fighting Cocks in St Albans (which also claims to be the oldest pub in Britain) was originally the dovecote for St Albans Abbey.

After the Dissolution, it was realised that its circular shape made it a perfect venue for cockfighting. Just to confuse things, any pub called the Cock & Bottle has nothing to do with sport. It simply denotes that both bottled and draught beers were available.

As to other entertainments, the Bear denotes bear-baiting, the Dog & Duck hunting, the Bull & Dog bull-baiting and the Bird in Hand, falconry. Nowadays, the more modern sports are represented by names like the Cricketers’ Arms, the Anglers’ Rest or the Huntsman.

Often the predominant trade of the area would give the pub its name. The Golden Fleece is a reflection of the local wool trade. The Coopers’, Bricklayers’, Saddlers’ and Masons’ Arms are commonplace signs. Legend has it that the Smiths Arms in Dorset was once a blacksmith’s forge where Charles II stopped to have his horse shod. Whilst he was waiting he demanded a beer but was told the smithy was unlicensed. Exercising his royal prerogative, he granted one and was duly served.

In the 18th Century, the population became more mobile and a need for coaching inns grew with predictable names such as Coach & Horses or Horse & Groom. Later the advent of steam gave every town its Railway Inn or Station Arms. 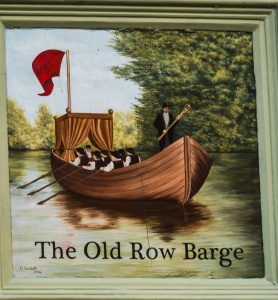 Where good stories come from

There is a story that, in Stoney Stratford, the London coach changed horses at the Bull and the Birmingham coach across the road at the Cock Inn. The passengers from the respective coaches would swap news whilst waiting for the change and it is from this that the phrase “cock and bull story” is said to have originated.

Plenty of cock and bull stories and local legends have found their way onto pub signs. Take, for example, the Drunken Duck at Barngates. The landlady one day found all of her ducks dead in the yard. Unaccustomed to waste, she plucked them ready for cooking. As she finished, the ducks began to revive and a search of the yard revealed a leaking beer barrel surrounded by webbed footprints. She was apparently so contrite that she knitted little jackets until their feathers grew back.

Alternatively, there was the Flying Monk of Malmesbury who claimed his faith was so strong it would enable him to fly. He jumped from the top of the local abbey to demonstrate his faith and, well, the pub was a nice memorial!

It is rare to take time to consider the sign outside the pub in the rush to get inside but few pubs were named by accident. Almost every name has a story behind it and, together, they illustrate the social history of England. With names enduring for centuries it is possible that the sign above the door is as old as the pleasure of drinking itself. 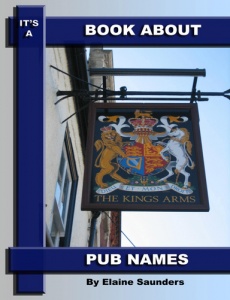 A BOOK ABOUT PUB NAMES

for the intriguing history behind over 200 of Britain’s most popular pub signs? At more than 160 A4 pages this e-book is packed with full-colour illustrations, fascinating facts and dozens of links to related websites for further information. A great electronic resource for anyone interested in British history, brewing or pubs.

Follow this link www.lulu.com/ to buy and I’d be pleased to hear from you with any comments about this article or pub signs in general.

More Resources
Brewery Artists - This fascinating website covers the history of pub sign painting by the studios of the Whitbread Artists Department and Brewery Artists.

Birth of Mary I

The future queen's birth was a major disappontment to Henry VIII, who was hoping for a male heir