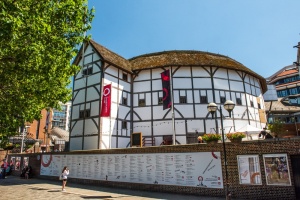 Elizabethan theatre and the name of William Shakespeare are inextricably bound together, yet there were others writing plays at the same time as the Bard of Avon. One of the most successful was Christopher Marlowe, who many contemporaries considered Shakespeare's superior. Marlowe's career, however, was cut short at a comparatively young age when he died in a tavern fight in Deptford, the victim of a knife in the eye.

Theatre had an unsavoury reputation. London authorities refused to allow plays within the city, so theatres opened across the Thames in Southwark, outside the authority of the city administration.

The first proper theatre as we know it was The Theatre, built at Shoreditch in 1576. Before this time plays were performed in the courtyard of inns, or sometimes, in the houses of noblemen. A nobleman had to be careful about which play he allowed to be performed within his home, however. Anything that was controversial or political was likely to get him in trouble with the Crown!

After The Theatre, further open-air playhouses opened in the London area, including the Rose (1587), and the Hope (1613). The most famous playhouse was the Globe (1599) built by the company in which Shakespeare had a stake.

The Globe was only in use until 1613 when a cannon fired during a performance of Henry VIII caught the roof on fire and the building burned to the ground. The site of the theatre was rediscovered in the 20th century and a reconstruction built near the spot.

These theatres could hold several thousand people, most standing in the open pit before the stage, though rich nobles could watch the play from a chair set on the side of the stage itself.

Theatre performances were held in the afternoon, because, of course, there was no artificial lighting. Women attended plays, though often the prosperous woman would wear a mask to disguise her identity. Further, no women performed in the plays. Female roles were generally performed by young boys.