High Society
Society began to form along new lines in the Tudor years. If feudal England was an age of community, Tudor England was one of individuality. Nobility and knights were still at the top of the social ladder, but the real growth in society was in the merchant class. 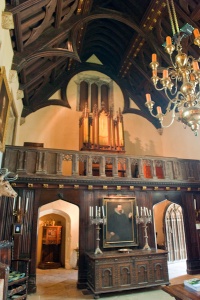 The Hall at Athelhampton
House, Dorset

Nobles old and new
Within the nobility there was a distinction between old families and new. Most old noble families were Catholic, and most new noble families were Protestant. The upper classes were exempt from the new oaths of allegiance to the Church of England, and many Catholic families maintained private chaplains.

Noble obligations
It is easy to think of the nobility as the idle rich. They may have been rich (though not necessarily), but they certainly weren't allowed to be idle. Often, high office brought debt rather than profit. Honorific offices were unpaid, and visiting nobles to England were the responsibility of the English nobility to house and entertain at their own expense. Appointment to a post of foreign ambassador brought with it terrible financial burdens. The ambassador was expected to maintain a household of as many as 100 attendants.

Elizabethan progresses
The most expensive "honour" of all was that of housing Queen Elizabeth and her household. Elizabeth hit on the clever scheme of going on constant "progresses" about the country. Aside from the benefit of bringing her into closer contact with her subjects, she saved a great deal of money by making the nobles with whom she stayed foot the bill for her visit. Many nobles begged off the honour of her stay for fear of bankruptcy. Incidentally, the "progresses" of Elizabeth account for the fact that there are so many places today that advertise "Queen Elizabeth slept here". She slept just about everywhere.

Nobility had other expenses besides the monarch. They maintained huge households, and conspicuous consumption and lavish entertainment was expected.

The new merchant class
The Tudor era saw the rise of modern commerce with cloth and weaving leading the way. A prosperous merchant class emerged from the ashes of the Wars of the Roses. The prosperity of the wool trade led to a surge in building in the active wool areas. "Wool churches" can be seen today in the Cotswolds, Lavenham, Leominster, and Stamford, among others. The importance of the wool trade in late medieval and Tudor England cannot be overstated. Witness the inscription carved on a monument in a wool church, "I thank God and ever shall, it was the sheep that payed for all".

Houses
House designs became more balanced and symmetrical, with E and H shapes common, (possibly as a tribute to Elizabeth and Henry VIII). For the first time, greater attention was paid to comfort and less to defence. Battlements disappeared, arches became flattened, and bay and oriel windows grew in size. 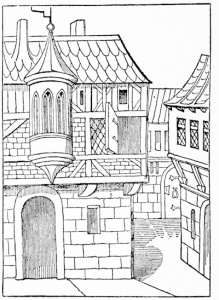 Houses were often built around an inner courtyard. The hall was still the centre of life, though now space was made in lofts for servants to sleep. The winter parlour appeared, a forerunner of the modern dining room. It acted as a family retreat area, and privacy began to be more prized. The walls were commonly decorated with linenfold panelling and adorned with freshly cut boughs for scent.

Tudor houses were generally timber-framed. The oak timbers were usually left to the weather rather than tarred black as is commonly seen in modern restorations and imitations. A new feature of manor houses was the long gallery running the length of the upper floor. It was a place for walks, games, and displaying art. There were few passages; one room opened directly into the next. This also meant that privacy tended to be a foreign concept to most people.

Houses began to be built with many more windows. Hardwick Hall in Derbyshire was known by the rhyme, "Hardwick Hall, more glass than wall". Elaborately carved oak staircases began to be featured in houses, replacing circular stone stairwells. 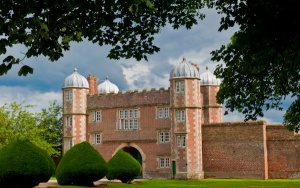 Gardens were a vital feature of Tudor life. Both flower and herb gardens were popular, with formal layouts of straight lines and walks. Topiary made an appearance.

Meals were elaborate and large. Breakfast was simply a light snack, while the main meal of the day was dinner, which began at 11 o'clock and lasted for three hours. A smaller supper was usual at 6 o'clock. The lower classes had dinner at noon and supper at 7 or 8 in the evening. The poor ate off wooden vessels, or pewter, the rich off silver, glass, or delft from Holland. China ware was unknown.

Food was cooked over open fires. Meat was cooked on a spit which was sometimes turned by a dog running on a circular treadmill attached to the spit end. Baking was done in iron boxes laid on the fire or in a brick oven set into the side of the fireplace.

House Interiors
If the medieval period was one of beautiful work in stone the Tudor period was one of beautiful woodwork. The movement began in the 15th century with church carvings (screens, stalls, and pulpits), and by Elizabeth's time, the carvings had spread to house interiors. Walls were heavily panelled and furniture grew more elaborate, though it was still heavy and sparse by modern standards. Sideboards became fashionable as a way to display plate. 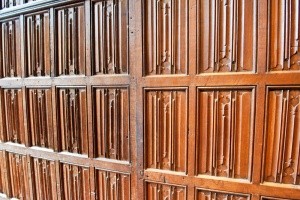 were few chairs; stools or chests were used instead. Rushes, loose or plaited together to form a rug, were used on the floors. These rushes were swept or replaced haphazardly, if at all, early in Tudor times. They accumulated layers of filth and fleas over the years. By the end of Elizabeth's reign, however, things changed, and the English acquired a reputation for cleanliness.

Great attention was paid to beds. The feather bed made an appearance, replacing the straw mattress. Elaborate four-poster beds were the mode, and were so highly valued that they are given special mention in the wills of the time.

Literature
Latin was still the language of literacy, despite the success of Geoffrey Chaucer. In 1589 Spenser's Faerie Queen was a revelation of the possibilities of the English language in prose.

Plays and playwrights proliferated after 1580, notably Christopher Marlowe and William Shakespeare. Plays were originally performed in the courtyard of inns, whose galleried design influenced the later design of playhouses such as Shakespeare's The Globe (1599). These theatres were open to the air in the centre, or pit. Performances were given in daylight, due to the difficulty of lighting the stage and the unsafe nature of travel after dark.

Popular games included bowls, paume (the ancestor of tennis), tilting at quintain, bull and bear-baiting, and cockfighting. Medieval tournaments were replaced by masques, a sort of play or spectacle full of allegory. Sometimes fireworks, which had just been invented, were a part of the masque.

Practice with a longbow was still encouraged despite the advent of gunpowder and cannon. Accuracy was expected; a law of Henry VIII decreed that no one 24 years of age or older should shoot at a target less than 220 yards away. Early guns were incredibly slow and proved useless in wet weather. Bowmen could afford to laugh at them.

Click here for a look at places to visit in England associated with Elizabeth I.