Although tradition says that Cuthbert was the son of an Irish king, it is most likely that he was born in the vicinity of Melrose, in present-day Scotland, of poor parents. Certainly, we know that he tended sheep on the hills above the abbey when he was older.

The young Cuthbert may have been influenced by the nearby monks of Melrose Abbey in his choice of vocation; when he was sixteen he received a vision of the soul of St. Aidan being carried to heaven by angels. This vision may have convinced him to enter holy orders at Melrose, but he did not rush to fulfil his calling.

Instead, Cuthbert spent several years as a soldier, probably in the service of the Kingdom of Northumbria against the attacks of King Penda of Mercia. After that conflict had ended, Cuthbert entered the monastery at Melrose, where his devotion earned him high praise. When the monastery at Ripon was founded, it was Cuthbert who acted as master.

These were years of conflict between the traditions of the Celtic Rite and the Roman Rite in the Catholic Church. In 661 Ripon adopted the Roman approach, and Cuthbert and his followers returned to Melrose. In 664 Cuthbert became Prior of Melrose after the death of Boisil. 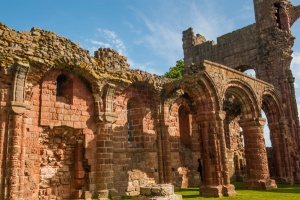 His reign as prior did not last long; in that same year of 664 the Synod of Whitby settled the ongoing dispute between Roman and Celtic Christianity in favour of the former. Cuthbert acquiesced with the Synod's decision and adopted Roman rule. He was sent to the Priory of Lindisfarne to ease the transition to Roman tradition in that house.

Cuthbert was a perfect choice for such a sensitive role; his reputation for devotion and sanctity, and the fact that he himself had been raised in the Celtic tradition and now supported Roman rule made his gentle leadership ideal for the job at hand. He spent a great deal of his time at Lindisfarne evangelizing among the people of the area, and exercising the tact and patience for which he was renown to lead the conversion to Roman Christianity.

Cuthbert's time at Lindisfarne was short, however. He desired the peace of a life of contemplation, and in 676 the abbot granted him leave to retire to take up the simple life of a hermit. Just where Cuthbert chose for his retreat is uncertain. Some traditions say that the rocky islet of St. Cuthbert's Island, near Lindisfarne, was the spot. Other traditions place him in St. Cuthbert's Cave, near Howburn. In any case, he did not stay long, and soon moved to Farne Island, opposite Bamburgh.

After several years of austere life on Farne, Cuthbert was reluctantly persuaded to return to a more active role in the church, and became Bishop of Lindisfarne. His consecration was held at York on Easter, 685. He returned to Lindisfarne, but his time was short. By Christmas, 686 he felt his death approach, and Cuthbert resigned his see and returned to Farne Island. He died on March 20, 687.

But the story of Cuthbert does not end there. He was buried at Lindisfarne Priory, where his tomb quickly became a magnet for pilgrims. Miracles were reported at his grave; in fact, so numerous were the reported miracles that Cuthbert was called the "Wonder-worker of England".

In 875 the monks of Lindisfarne became alarmed by the threat of Danish invasion. They fled the island, taking with them their most precious possessions, including the relics of Saint Cuthbert. The monks of Lindisfarne wandered for a full seven years, lugging the saint's bones about with them, until in 883 they were given a church at Chester-le-Street, near Durham. Ironically, their benefactor was a Danish king who had converted to Christianity.

In the late 10th century a fresh Danish invasion threatened, so Cuthbert's bones were moved again, this time to Ripon, over 300 years after he had first come to the great Abbey as a master. After only a few months at Ripon, Cuthbert was once more carted off. The intention was to return the saint to Chester-le-Street, but on the way the bones lay at Durham, where apparently signs were shown indicating that this was the place the saint wished to be buried.

A series of churches were built to house the relics. The first stone church was built on the site of the present cathedral, and was consecrated in about 999. During William the Conqueror's "Harrying of the North" (1069) the bones were moved to Lindisfarne for safety but soon returned to Durham.

In 1104 they were finally moved to the new cathedral of Durham, where a suitable shrine had been prepared. During this final move the body was found to be incorrupt (i.e. perfectly preserved) as was the head of St. Oswald, which had been placed with Cuthbert's body for safety. It is from this point that the head of St. Oswald was adopted as the symbol of St. Cuthbert.

Throughout the Middle Ages, the shrine of Cuthbert remained one of the most popular places of pilgrimage in the North of England. During the English Reformation, the tomb of Cuthbert was plundered, but it seems that the monks had warning, and had hidden Cuthbert's body. In 1827 a secret tomb was found in the Cathedral. Was the body contained therein the body of St. Cuthbert. The question has never been adequately settled, though the bones are now displayed as authentic within the cathedral.

Saint Cuthbert is also associated with the Lindisfarne Gospels. This illuminated manuscript was produced by Eadfrid, Bishop of Lindisfarne, in the 8th century. It is without question one of the best surviving examples of traditional Celtic calligraphy and illustration. The gospel was placed by Eadfrid on the shrine of Cuthbert, where it stayed until the monks fled the priory.

In a delightful tale, which ought to be true even if it is not, the gospel was lost overboard as the monks crossed the Irish Sea. As the monks despaired, a vision of Cuthbert appeared before them and told them where to find the book. It was found on the shore three days later, in the spot foretold by Cuthbert, intact save for some minor staining from the seawater. When the gospel (now in the British Museum) was later analyzed, it was found marked with stains that seem likely to be from salt water. So the romantic tale contains more than a bit of truth.