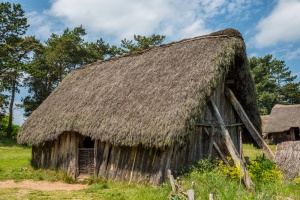 Life and Religion
It is difficult to generalize about an era as lengthy as the Dark Ages, but we'll do it anyway. The Anglo-Saxons were pagans when they came to Britain. They worshipped gods of nature and held springs, wells, rocks, and trees in reverence.

Religion was not a source of spiritual revelation, it was a means of ensuring success in material things. For example, you might pray to a particular goddess for a successful harvest, or for victory in battle. A few of the main Anglo-Saxon gods were Tiw, Wodin (Odin), Thor, and Friya, whose names are remembered in our days of the week Tuesday, Wednesday, Thursday, and Friday.

Religious observance consisted of invocations and charms to ensure the gods' help in securing a desired outcome in the material world, though the presence of grave goods indicates a belief in an afterlife. There is a possibility that female slaves may have been sacrificed on the death of a male owner and included in the grave to accompany him in the next world.

A Lord's Life
We know little about how most people lived, for so little remains. The richer lords lived on estates, with a main rectangular hall surrounded by outlying buildings for various living, working, and storage purposes. Inside the hall, a lord might mark his prestige by expensive wall hangings or even paintings. The hall was the scene of feasts for the lord's followers, and a lord was expected to be a lavish host.

Society was divided into several social classes, which might vary from place to place. At the top was the king. He was essentially a war leader. He was expected to provide opportunities for plunder and glory for his followers. The king who did not provide land, slaves, or plunder might wake up dead one fine morning.

Below the king there were two levels of freemen, the upper-class thanes and the lower class ceorls (churls). The division between the two was strictly in terms of land owned. A man could only be a thane if he owned at least five hides of land (a hide was defined as the amount of land necessary to provide a living for one family). Aside from the ownership of land, a ceorl could actually be a richer man than the thane.

Below the thanes and ceorls were the slaves. Slavery was one of the biggest commercial enterprises of Dark Age life, and much depended on this involuntary labour force.

Slavery - the way in...
How did one become a slave? You could have the bad luck to be born a slave, of course. Beyond that, war was the most frequent source of slaves. Many conquered Celtic Britons would have become slaves. People could also become slaves if they were unable to pay a fine. In some cases, a family would sell a child into slavery in time of famine to ensure the child's survival.

...and the way out
Slavery was not necessarily a lifetime sentence, however. A slave could be ransomed by his or her relatives or granted freedom in an owner's will. If a person became a slave because they were unable to pay a debt, they might be freed when the value of their labour reached the value of the original debt.

Clothing
The robe or tunic gathered at the waist was the common garment for a man, completed by hose and soft shoes. For a woman the robe or dress extended to the feet. The usual materials were linen and woolens, the more expensive outfits being marked by colourful dyes and exotic borders. Brooches were used to fasten clothing by rich and poor, and amulets of stones were worn for luck.

Weapons
In war the common weapon was the spear made with a seven-foot-long ash shaft and an iron head. It was both thrown and used to jab. Shields were round, made of wood covered with leather, and had an iron boss in the centre.

Only the nobility used swords, which were about 30 inches long, made of iron with steel edges. The hilt was often elaborately carved and jewelled, and could be inscribed with good luck symbols and the names of gods.

The Danish Vikings were more heavily armed than the Anglo-Saxons, relying on chain mail and helmets, and short stabbing swords which were useful in close quarters, as well as the fearsome double headed battle axe.

Leisure
When they weren't fighting (one wonders when that was) the favourite pastimes of the Dark Ages were dice and board games such as chess. Elaborate riddles were popular, as was horse racing and hunting. At feasts, the most common entertainment was the harp, which was also used in church music. In addition to the harp, scenes of juggling balls and knives have been found illustrating books of the period.

Travelling
Travel was not uncommon, and the main trade routes, often along the old Roman roads, were used frequently. However, off the main routes travel could be a risky business. Travellers were advised to shout, blow horns, and make lots of noise. Otherwise, any strangers were assumed to be outlaws and could be killed out of hand.

To look after the king's interests (see that all the taxes were collected) and administer justice, were the ealdormen and shire-reeves (sheriffs). Within the shires were the towns, or burhs, which ranged in size from 5000 people at York to 500 at St. Albans. Initially, only some of the towns were walled, and those often with earthworks reminiscent of the Bronze Age.

Farming
In the countryside, the vast majority of the people lived by farming. At first most of the farms were owned outright. The ceorls worked co-operatively, sharing the expense of a team of oxen to plough the large common fields in narrow strips that were shared out alternately so that each farmer had an equal share of good and bad land.

Later much of this land was consolidated into the large estates of wealthy nobles. Ceorls might work the land in return for service or produce, or they might work the lord's land a given number of days per year. As time went on more and more of these large estates were established as integrated commercial enterprises, complete with water mill to grind the grain.

Food
The crops most frequently grown were wheat, oats, rye, and barley (both as a cereal and as the base for beer). Peas, beans, and lentils were also common. Honey was the only sweetener in use, and it was used to make the alcoholic beverage mead. Pigs were a major food animal, as were cattle, goats, and sheep. Horses and oxen were raised for heavy farm labour and transportation, though the stirrup had yet to make an appearance from the far east.