HERITAGE HIGHLIGHTS:   Superb 14th century carving and tracery - and a carving of a pig playing bagpipes 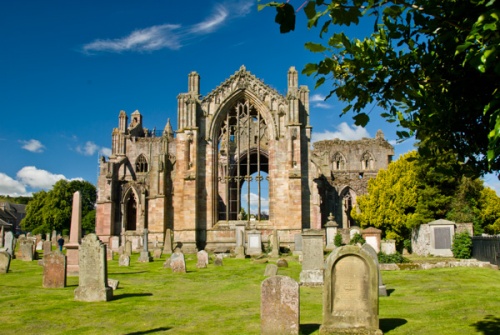 One of the most popular visitor attractions in Scotland, the ruins of historic Melrose Abbey stand on a peaceful walled site at the heart of this pretty Borders town. Melrose was the first Cistercian monastery to be founded in Scotland. It was founded in 1136 by King David I, who gave land for Abbot Richard and a group of monks from Rievaulx Abbey in Yorkshire to establish a new abbey here.

It really was a 'new' abbey for there was already a monastery at Melrose, a 7th-century monastery at Old Melrose, associated with the saints Aidan and Cuthbert. Old Melrose Abbey probably itself stood on the site of an even earlier monastic site, so the new Cistercian abbey was probably the third to be established in the Melrose area.

The Cistercians amassed substantial estates to help pay for the abbey, including some 5000 acres they directly owned, and up to 17,000 acres of leased land in the Lammermuir Hills. This land they primarily used to raise sheep, with huge flocks tended by lay brothers. It was the wealth they gained from the sheep wool that would provide the abbey's considerable wealth.

The second abbot of Melrose was Waltheof, son of Simon, 1st Earl of Northampton, and Maud, 2nd Countess of Huntingdon, and the stepson of King David I, the abbey's founder. As a second son, Waltheof could not inherit his parent's titles or estates, so he did the next best thing; he chose a career in the church, and became an Augustinian canon at Nostell Priory, in Yorkshire.

In 1140 his bid to become Archbishop of York failed, partly due to infighting with other church officials and partly due to political opposition from King Stephen, who thought his ties to Empress Maud made him suspect. 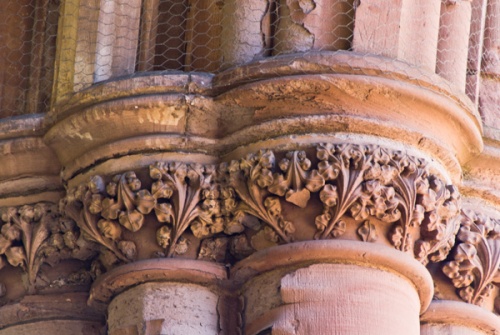 In 1143 Waltheof joined the Cistercian order at Rievaulx Abbey, and 5 years later was elected the new abbot of Melrose. This post he held until his death in 1159, even refusing an offer of the bishopric of St Andrews.

Shortly after his death tales began to spread of Waltheof's saintliness. The new abbot, William, tried to quash the rumours, perhaps because he was concerned about the disruptive effect of pilgrims descending on the abbey. One wonders if he also knew anything about Waltheof's character that made saintliness a challenging pill to swallow?

But it was no use; Waltheof's fame spread. William's stance against the new cult of Waltheof made him unpopular amongst his fellows, and in 1170 he resigned his position as abbot in favour of the abbey prior, Jocelin.

The new abbot embraced the cult of Waltheof with open arms, commissioned a monk from Furness Abbey to write a Life of St Waltheof, and established a shrine to his predecessor. So Waltheof became a saint in the popular imagination, though not by official church action. Waltheof's feast day is 3 August, the date of his death. 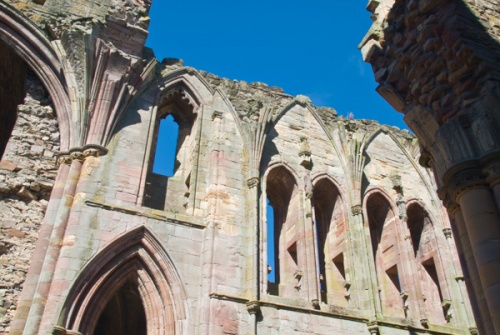 Inside the abbey church

Such was the abbey's prestige that Robert the Bruce's dying wish was that his heart be carried on a Crusade to the Holy Land, then returned for final burial before the high altar of Melrose Abbey. It was not unusual at that time for the heart to be removed from the body and buried separately, often in a completely different location.

In this case, King Robert's body was interred at Dunfermline Abbey. In 1921 a lead-lined cylinder containing a small lead casket was uncovered in the chapter house. This was said to be the heart casket used for the king's heart. It was presumed at the time that the heart casket was removed from the high altar to the chapter house during rebuilding work on the church in the 14th century.

Whilst there is nothing to suggest that the casket really was that of Robert I, it is certainly plausible given the historical evidence - and it makes a good story! A plaque within the grounds commemorates the king's heart burial but does not (necessarily) show exactly where that burial was. King Alexander II (d. 1249) was also buried at Melrose, another indication of just how powerful and prestigious the abbey became.

The abbey church was largely finished within the decade, and it was dedicated to the Virgin Mary in 1146. The church and many of the 12th-century abbey buildings were destroyed during Robert Bruce's wars of Scottish independence in the early 14th century. Edward I attacked Melrose in 1300 and 1307, and the abbey was heavily damaged by Edward's son Edward II in 1322.

In 1385 an attack by Richard II necessitated a complete rebuilding of the abbey church, and further attacks by Henry VIII in the 1540s caused still more damage. Yet despite the damage caused by the repeated attacks on the abbey, large sections are still remarkably intact, including the presbytery, transepts, and choir.

Some fragments of the 12th-century church remain in the west wall and the foundations of the nave and transepts. Another early remnant is a 12th-century canal, bringing water from the River Tweed to power a corn mill, flush the abbey sewers and provide drinking water. 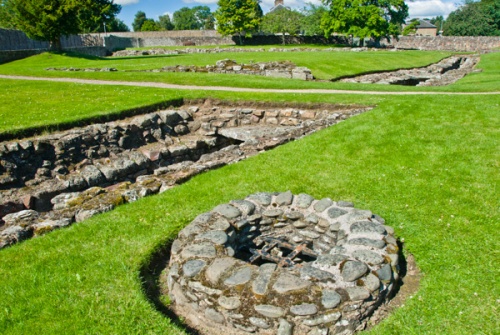 Well in the Commendator’s House grounds

A Wealth of Carvings

Other than these early remains, much of what we see today at Melrose Abbey dates to the 14th - 16th centuries. By the latter period, the once prosperous abbey had fallen upon hard times, and the construction of the west end was never finished, but the remainder is superb, with elaborate carvings on the capitals, corbels, and roof bosses.

The quality of the carving is what makes Melrose so enjoyable to visit today; the abbey must have employed the most highly skilled masons to create the elegant array of carvings, from flowers, fruit, and foliage to humorous human figures and strange beasts. Among the carvings, you can find comic depictions of a pig playing the bagpipes, a fat monk, a musician playing the lute, a cook with a soup ladle, and a mason with his mallet (a self-portrait perhaps of the artist?).

The architecture, and particularly the carving at Melrose has been called the 'high point of 15th century Scottish decorated architecture', and it is hard to argue with that praise. 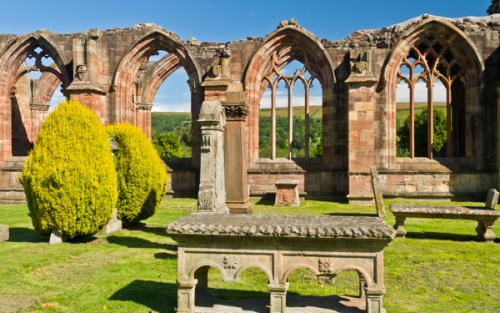 A table tomb in the churchyard

The rebuilt abbey church shows considerable English Perpendicular influence, though; the great east window is similar to those at York Minster and Beverley Minster, both in Yorkshire. The late medieval church incorporated a series of chapels off the south aisle, and many of these feature funerary monuments.

The graveyard outside the church is a treasure trove for the local historian, with a collection of gravestones from the 17th and 18th centuries that cover a wide cross-section of society; here you can find grave stones of a blacksmith, a druggist, a surgeon, a joiner, a gardener, and on and on.

The abbey suffered the fate of most monastic houses in the Reformation and was dissolved in 1609, but the abbey church, decaying as it was, continued in use as the local parish church until a new church was built in 1810. The monastic buildings were robbed for local building projects, but enough remains to still inspire a sense of awe at the late medieval craftsmanship.

The abbey is a delight. Everywhere you look is marvellous sculpture, elaborate vaulting, beautifully carved statues, gargoyles, grotesques, flowing tracery, and soaring stonework. You can ascend remnants of the tower for a birds-eye view of the site, and investigate a small museum in the 16th-century Commendator's House, with objects found during excavations on the site. Among these objects is a fragment from the shrine of St Waltheof.

Almost directly across the road from the abbey is Harmony Garden, a small walled garden owned by the National Trust for Scotland, while a very short stroll up the road brings you to Priorwood Garden, another historic walled garden in the care of the NTS. Our family had a wonderful time exploring Melrose Abbey and the other historic sites in and around the town. I consider the abbey an absolute 'must-see' historic site. 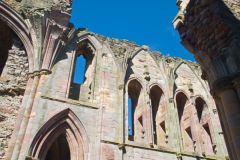 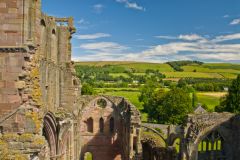 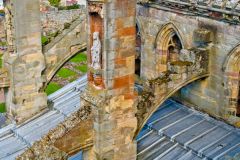 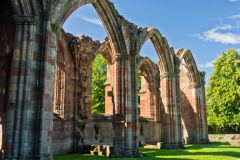 More self catering near Melrose Abbey