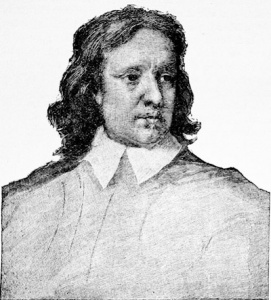 Oliver Cromwell was born on 25 April 1599, in Huntingdon, near Cambridge. His father Robert was the younger son of a knight, which in those days meant that he had very little property. Cromwell grew up in genteel poverty; not quite a member of the nobility, yet not a commoner either. In 1620 he married Elizabeth Bourchier.

For the early part of his adult life, Oliver scraped along, barely making ends meet on the scraps he had inherited from his father. Then in 1630, the failure of his business caused him to move to St. Ives and begin again as a yeoman farmer. However, in 1637 he inherited a modest income and property when his mother's brother died without heirs.

Despite Cromwell's impoverished circumstances, he had many opportunities to interact with powerful figures at court. His grandfather lived in state at his house outside Huntingdon, where he frequently entertained royalty and court officials. And through his wife's father, Sir James Bourchier, Cromwell was brought into contact with London merchants and leading Puritan figures.

In 1630 Cromwell suffered what we would today term a mental breakdown. At the same time, he underwent a powerful religious conversion to the Puritan cause. He afterwards said that he felt as though he was waiting for God to give him a mission.

In the meantime, Cromwell was elected as a member of Parliament for Huntingdon, a post he owed more to patronage and aristocratic connections than to any great merit. He attended the Parliament of 1628-9 (and was likely the poorest MP there). He seems to have been overawed by his elevated status, and hardly made any contribution to the Parliamentary sessions.

However, in 1640 Cromwell was back in Parliament, this time representing Cambridge. And this time he had quite a lot to say! He was one of the most outspoken critics of royal policies and of the established Anglican church. He also advocated increased Parliamentary powers, calling for annual sessions of Parliament, and for Parliament, not the king, to have the power to name army generals.

When fighting finally broke out in 1642, Cromwell was named a captain of horse (a minor cavalry commander). But now his military leadership qualities came to the fore. Within a year he was Lieutenant General of Horse for the Army of the Eastern Association (essential equivalent to modern East Anglia).

In 1645, the three largest Parliamentary armies were combined. Parliamentary leaders could not agree on who should lead the cavalry of the new army, so they appointed Cromwell as temporary commander for 40 days. The temporary appointment was renewed many times over until finally becoming permanent in 1647.

In the meantime, Cromwell led his cavalry in some of the most vital battles of the Civil War. His horsemen were responsible for major contributions to the victories at Marston Moor (1644) and Naseby (1645).

It is easy to regard Cromwell as a fire-breathing radical, but that assessment is not a fair one. To be sure, he roundly castigated Parliamentary leaders who advocated a negotiated settlement with the king. Cromwell wanted to settle for nothing less than total victory over the Cavaliers.

On the other hand, Cromwell rigorously opposed the religious intolerance of the Presbyterians and the political intolerance of the Levelers. He seems to have made a genuine effort to work within the existing forms of government and negotiate in good faith with King Charles for governmental and religious reforms.

Cromwell's resolve towards tolerance was tested in 1647 when Charles prompted a Scottish rising. He put down the royal allies at Preston, and Yorkshire. Though he felt betrayed by Charles, Cromwell held out against a trial, and when he agreed it was with the idea that Charles would abdicate in favour of one of his sons. But Charles was obstinate to the last, and refused to step aside. Once it became clear that the king would not be swayed, Cromwell became one of the most vocal supporters of regicide.

After the death of Charles, further rebellions in favour of the future Charles II arose in Ireland and Scotland. Cromwell dealt with Ireland first, and his ferocious retribution for Irish actions earned him a reputation for cruelty. Scotland was next, and finally, Cromwell defeated the younger Charles at the Battle of Worcester in 1651.

Cromwell then participated in the debates of the "Rump Parliament", which sat until 1653. Finally, tired of the continuous bickering and lack of real desire for reform, he dissolved the Rump by the crude expediency of armed force. He tried to work with religious leaders to " to design a blueprint for a godly commonwealth", but once again his efforts were done in by the inability of the various parties to work together.

Finally, and probably with a sense of exasperation, Cromwell himself took up the reigns as Lord Protector, head of an executive council. Several efforts were made to have him named king, but this Cromwell resisted firmly. His rule was a time of rigid social and religious laws on radical Protestant lines.

On 3 September 1658, Oliver Cromwell died and was buried at Westminster Abbey. After abortive attempts by his son, Richard Cromwell, to govern as Lord Protector, Charles II was called back from exile to resume the monarchy. In 1661 Oliver Cromwell's body was exhumed from its grave and hung at Tyburn. Then his head was cut off and put on public display for nearly 20 years outside Westminster Hall.

Related:
The Early Stuarts and the Civil War
Cromwell and Restoration