Passionate about British Heritage
History > The Stuarts > Cromwell and the Restoration

Oliver Cromwell and the Restoration of Charles II

The Commonwealth
The next eleven years saw the rule of the Commonwealth (1649-60). Ostensibly Parliament was in control, but the real power lay with Cromwell and the army. It was just as well that the army was still standing, for Charles' son landed in Scotland, had himself declared Charles II, and invaded England. He was defeated by Cromwell at Worcester (1650) and forced to hide in a tree to avoid capture, before successfully fleeing to France.

The Protectorate
Eventually the conflict between Cromwell and Parliament came to a head with Cromwell establishing the Protectorate (1653-58). This was essentially a monarchy by another name, with Cromwell at its head. His rule was a time of rigid social and religious laws on radical Protestant lines.

Cromwell's government divided the country into 11 districts, each under a major general, who were responsible not only for tax collection and justice, but for guarding public morality as well. Church attendance was compulsory. Horse racing and cockfights were banned, plays were prohibited, gambling dens and brothels were closed, as were many alehouses. Drunkenness and blasphemy were harshly dealt with. People being people, these measures were extremely unpopular.

Cromwell had a bodyguard of 160 men during the Protectorate. In the end, he was just as dictatorial and autocratic as James I and Charles I had been. He called Parliament when he needed money and dismissed it when it argued. On Cromwell's death his son, Richard, tried to carry on as Lord Protector (1658-59), but he was not the forceful character that his father had been.

The results of the Commonwealth and the Protectorate confirmed in the English a hatred of military rule and the severe Puritanism associated with it. From this point on Parliament opposed Puritanism vigorously.

The Restoration
In 1660 Parliament offered to restore the monarchy if Charles would agree to concessions for religious toleration and a general amnesty. Charles was not as hard-headed as his father, and he agreed to the proposals. He returned to London on a wave of popular support to be crowned Charles II (1660-85).

Charles' closest five advisors had initials which formed the word "Cabal", which came to mean a secret association because they were suspected to be the real power behind the throne.

The Restoration was notable for a relaxation of the strict Puritan morality of the previous decades. Theatre, sports, and dancing were revived. Charles' court was notable for its revelry and licentiousness.

While Charles was enjoying his new court, he was less than successful internationally.

The English fought a losing naval war with the Dutch, and England's presence on the high seas had never been so low. 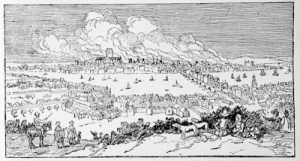 London at the time of the Great Fire

Plague and Fire
Things on dry land weren't all that much better. In 1665 the Great Plague hit London, decimating the population.The following year the Great Fire burned 450 acres and left large parts of the capital in ruins. The fire is said to have started in a bakehouse at the bottom of Pudding Lane. Today, the height of Christopher Wren's London Monument in King William Street is the distance from that point to the site of the bakehouse. The best description of this period of English history comes from the meticulous diaries of Samuel Pepys, a high official in the naval office.

Wren and the Building of St. Paul's
One of the positive consequences of the London Fire was that Old St. Paul's Cathedral, which had been badly in need of renovation, was damaged beyond repair. Within days of the fire, architect Christopher Wren presented the king with a plan for a new cathedral. With some alterations this became the magnificent church that stands today (click here for St. Paul's Cathedral). Wren was master of works for the construction of the cathedral for the rest of his life, in addition to being responsible for scores of other churches and the Royal Naval College at Greenwich.

Changes in Government
Under Charles II there was a general move towards a cabinet style of government. Groups formed which were the fore-runners of the later Tories (the court party, supporting royal prerogative), and the Whigs (the country party, supporting Parliamentary rights in moderation). The name "Whigs" came from the Whiggamores, Scottish rebels against the king, while the "Tories" were named after Catholic royalist rebels in Ireland. 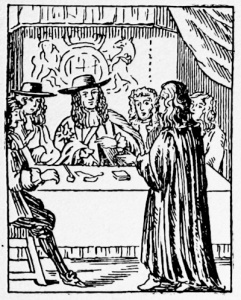 The Popish Plot
In 1678 an unsavoury character named Titus Oates alleged a Catholic plot to murder Charles and establish Catholicism. In the wake of the so-called Popish Plot Catholics were excluded from Parliament, some were arrested, and some were killed. This was only one of a series of real or alleged Catholic plots against the king.

On the judicial front, the Habeus Corpus Act (1679) made justice officials responsible for the welfare of prisoners in their care, provided for a speedy trial, and ensured that a person could not be tried twice for the same crime.

Social conditions during the 17th century were abysmal. Laws were harsh, and religious non-conformists and Catholics faced heavy discrimination. On the other hand, things were so much better in England than elsewhere in Europe that England was an example of model government to such continental commentators as Voltaire and Montesquieu. Perspective is everything.