The History of Tea in Britain 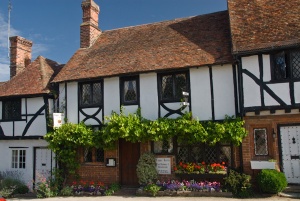 A tea shop in Chilham, Kent

Tea, that most quintessential of English drinks, is a relative latecomer to British shores. Although the custom of drinking tea dates back to the third millennium BC in China, it was not until the mid 17th century that tea was first introduced to England.

The use of tea spread slowly from its Asian homeland, reaching Europe by way of Venice around 1560, although Portuguese trading ships may have made contact with the Chinese as early as 1515.

It was the Portuguese and Dutch traders who first imported tea to Europe, with regular shipments by 1610. England was a latecomer to the tea trade, as the East India Company did not capitalise on tea's popularity until the mid-18th century.

Curiously, it was the London coffee houses that were responsible for introducing tea to England. One of the first coffee house merchants to offer tea was Thomas Garway, who owned an establishment in Exchange Alley. He sold both liquid and dry tea to the public as early as 1657. Three years later he issued a broadsheet advertising tea at six and ten pounds per pound (ouch!), touting its virtues at 'making the body active and lusty', and 'preserving perfect health until extreme old age'.

Tea gained popularity quickly in the coffee houses, and by 1700 over 500 coffee houses sold it. This distressed the tavern owners, as tea cut their sales of ale and gin, and it was bad news for the government, who depended upon a steady stream of revenue from taxes on liquor sales. By 1750 tea had become the favoured drink of Britain's lower classes.

Charles II did his bit to counter the growth of tea, with several acts forbidding its sale in private houses. This measure was designed to counter sedition, but it was so unpopular that it was impossible to enforce. A 1676 act taxed tea and required coffee house operators to apply for a licence.

This was just the start of government attempts to control, or at least, to profit from the popularity of tea in Britain. By the mid 18th century the duty on tea had reached an absurd 119%. This heavy taxation had the effect of creating a whole new industry - tea smuggling.

Ships from Holland and Scandinavia brought tea to the British coast, then stood offshore while smugglers met them and unloaded the precious cargo in small vessels. The smugglers, often local fishermen, snuck the tea inland through underground passages and hidden paths to special hiding places. One of the best hiding places was in the local parish church!

Even smuggled tea was expensive, however, and therefore extremely profitable, so many smugglers began to adulterate the tea with other substances, such as willow, liquorice, and sloe leaves. Used tea leaves were also redried and added to fresh leaves.

Finally, in 1784 William Pitt the Younger introduced the Commutation Act, which dropped the tax on tea from 119% to 12.5%, effectively ending smuggling. Adulteration remained a problem, though, until the Food and Drug Act of 1875 brought in stiff penalties for the practice.

In the early 1800s ships carrying tea from the Far East to Britain could take over a year to bring home their precious cargo. When the East India Company was given a monopoly on the tea trade in 1832, they realised the need to cut the time of this journey. The Americans actually designed the first 'clippers', or streamlined, tall-masted vessels, but the British were close behind. These clippers sped along at nearly 18 knots by contemporary accounts - nearly as fast as a modern ocean liner.

So great was the race for speed that an annual competition was begun for clippers to race from the Canton River to the London Docks. The first ship to unload its cargo won the captain and crew a hefty bonus.

The most famous of the clipper ships was the Cutty Sark, built in 1868 in Dumbarton. It only made the tea run eight times, but for its era, it was a remarkable ship. The Cutty Sark is now on exhibition at Greenwich.

Afternoon tea is said to have originated with one person; Anna, 7th Duchess of Bedford. In the early 1800's she launched the idea of having tea in the late afternoon to bridge the gap between luncheon and dinner, which in fashionable circles might not be served until 8 o'clock at night. This fashionable custom soon evolved into high tea among the working classes, where this late afternoon repast became the main meal of the day.

The popular pleasure gardens of Ranelagh and Vauxhall in London began serving tea around 1730. An evening of dancing and watching fireworks would be capped by tea. The concept caught on, and soon Tea Gardens opened all over Britain. Usually, the gardens were opened on Saturday and Sunday, and an afternoon of entertainment and dancing would be highlighted by serving tea.

That oh, so British establishment, the tea shop, can be traced to one person. In 1864 the female manager of the Aerated Bread Company began the custom of serving food and drink to her customers. Her best customers were favoured with tea. Soon everyone was asking for the same treatment.

The concept of tea shops spread throughout Britain like wildfire, not in the least because tea shops provided a place where an unchaperoned woman could meet her friends and socialize without damage to her reputation.

What connection, you might be excused for asking, does tea have with the growth of the British pottery industry? Simply this: tea in China was traditionally drunk from cups without handles. When tea became popular in Britain, there was a crying need for good cups with handles, to suit British habits. This made for tremendous growth in the pottery and porcelain industry, and the prosperity of such companies as Wedgwood, Spode, and Royal Doulton.

Note: much of the material in this article is based on the excellent "History of Tea" on the web site of the Tea Council