HERITAGE HIGHLIGHTS:   The most famous clipper ship in the China Tea Trade 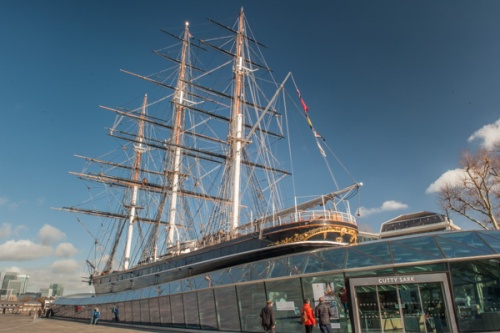 Enshrined as a permanent exhibit just yards from the River Thames, the Cutty Sark was the last and most famous tea-clipper built for the lucrative China tea trade.

The Cutty Sark was built in Dumbarton, Scotland, for John 'Jock' Willis, a successful London tea merchant. Willis was popularly known as 'White Hat Willis' for his habit of wearing a white top hat. 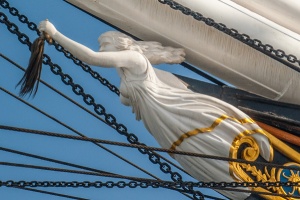 Willis wanted his new ship to be the fastest clipper on the China tea run; the first ship to port with the new season's tea was able to command a premium price, so Willis was willing to pay for the finest clipper ship he could buy. Despite Willis's intentions, the Cutty Sark never won the race back from China, and never lived up to her reputation as a truly fast clipper ship.

Launched in 1869, the Cutty Sark was only active for 7 years, collecting her last cargo of tea in December 1877, and made only 8 round-trip voyages to China.

Why such a short career as a tea clipper?

Unfortunately for Willis, the launch of the Cutty Sark coincided with the opening of the Suez Canal and the growing popularity of steamships. Steam-driven ships could pass through the canal, whereas clipper ships like the Cutty Sark could not. That meant that steam, ships could cut thousands of miles off the trip to China to collect tea. The Cutty Sark, though one of the fastest clipper ships ever built, was outmoded almost before it sailed. 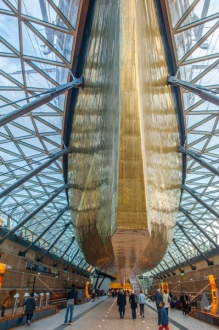 The Cutty Sark consistently outsailed her competitors, and she dominated the wool trade for over a decade, earning a reputation for exceptional speed on the 2-month voyage. She famously once overtook and passed the steamship Britannia, travelling at a rate of 17 knots.

But once more the steamship spoiled the Cutty Sark's career, and once the steam vessels made the Australian wool trade their own, the Cutty Sark was sold to a Portuguese company. From 1895-1922 the ship (renamed Ferreira) was a tramp vessel, carrying cargo between Portugal and the far-flung corners of the Portuguese Empire.

In 1922 the Ferreira put into Falmouth to repair damage suffered in a gale. A retired sea captain named Wilfred Dowman saw the ship and determined to buy her. Dowman restored the Cutty Sark to approximately how she had appeared during her days as a tea clipper.

The ship was used for naval training until 1951 when it was sent to London for the Festival of Britain. She might well have been scrapped following the festival, but the ship was saved by the National Maritime Museum and put into dry dock at Greenwich in 1954, beside the Old Royal Naval College.

In 2007 a devastating fire broke out aboard the Cutty Sark, and it appeared that the ship might be completely destroyed. Thankfully total disaster was avoided, but the subsequent restoration lasted until 2012. 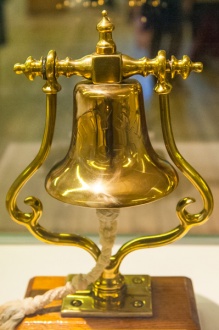 What is a Cutty Sark?

The ship's name is a curious one unless you know Scottish folklore. The name 'cutty sark' comes from a Scottish term for a woman's undergarment, or light skirt. The term was used most famously in Robbie Burn's poem, Tam o' Shanter.

In the poem, Tam is pursued by a witch named Nannie, who just grasps the tail of Tam's horse before he crosses the bridge. The witch, who cannot cross running water, is left on the bank, still clutching the horse's tail. The Cutty Sark figurehead shows the figure of Nannie, looking rather unlike a traditional witch, but holding onto a horse's tail.

I've been to the Cutty Sark both before the fire and after, and I can attest that the visitor experience today is much, much better. At first glance, the ship appears to be sunk into a modern plinth of glass and steel so that it is only visible from the tween deck up.

But once you step inside the visitor centre you realise that the light-filled modern structure allows you to go completely underneath the ship, and see close-up the remarkable metal hull, made to let the ship pass through the water with minimal resistance. There is a cafe under the ship's stern, and you can walk the entire length of the vessel to a display of historic ship's figureheads at the bow.

Inside the ship, you first see the cargo hold, where tea was stacked carefully, maximising every bit of space. There is an audio-visual display on the ship's history, and a lot of information on the China tea trade, and the history of tea in Britain.

Then you climb to the tween deck, where there is quite a lot of information on the Australian wool trade. Here you can try your hand at steering the ship from Australia to England in a sailing simulator (my wife shipwrecked her vessel twice). On the main deck, you can see living and working quarters like the captain's parlour, steward's room, and bunks where the sailors slept.

I thought the displays were excellent, with lots for families and kids to enjoy, and plenty of historical information for adults to take in.

Until a few years ago you had to take the Docklands Light Railway to the end of the line at Island Gardens and walk across the Thames through a pedestrian tunnel to Greenwich. It was actually quite an enjoyable way to visit Greenwich, and you can still take that route. But now the DLR has been extended under the river you can take the train to Cutty Sark station, just a few hundred yards from the ship. 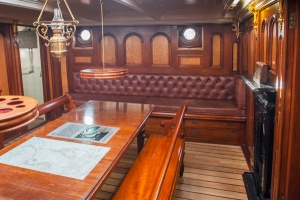 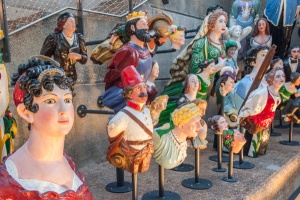 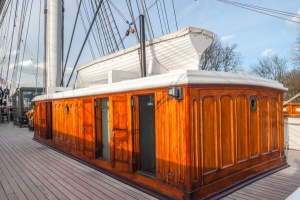 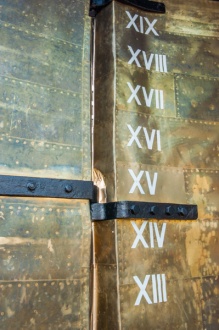 The metal-clad keel and hull 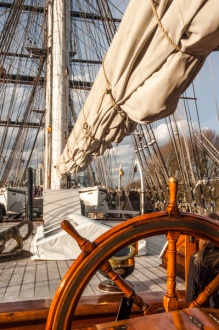 The ship's wheel and
mizzen mast 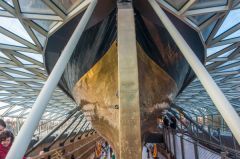 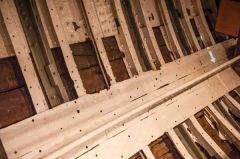 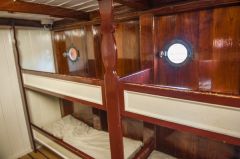 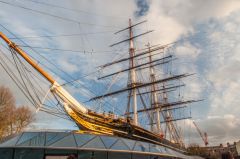 Note: You can get Free Entry to Cutty Sark with the London Pass

More self catering near Cutty Sark >>