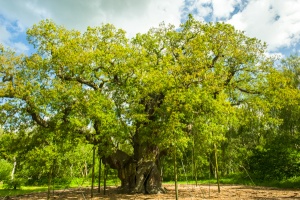 The 'Major Oak' in Sherwood Forest

The story of Robin Hood is so well known that it scarcely needs to be reviewed, but don't worry, I'll do it anyway. The "facts ", at least one romantic version of them, are these. In the time of Richard the Lionheart a minor noble of Nottinghamshire, one Robin of Loxley, was outlawed for poaching deer. Now at that time, the deer in a royal forest belonged to the king, and killing one of the king's deer was therefore treason, and punishable by death.

So Robin took to the greenwood of Sherwood Forest, making a living by stealing from rich travellers and distributing the loot among the poor of the area. In the process, he gained a band of followers and a spouse, Maid Marian.

Despite the best efforts of the evil Sherrif of Nottingham he avoided capture until the return of King Richard from the Crusades brought about a full pardon and the restoration of Robin's lands. In other versions he dies at the hands of a kinswoman, the abbess of Kirklees Priory. That, in a very small nutshell, is the legend, but is there truth behind it?

Well, possibly. Someone, or maybe several someones, named Robin Hood existed at different times. Court records of the York Assizes refer to a "Robert Hod", who was a fugitive in 1226. In the following year the assizes referred to the same man as "Robinhud".

By 1300 at least eight people were called Robinhood, and at least five of those were fugitives from the law. In 1266 the Sherrif of Nottingham, William de Grey, was in active conflict with outlaws in Sherwood Forest. It seems most likely that a number of different outlaws built upon the reputation of a fugitive in the forest, and over time, the legend grew.

One thing to note about the early legends is that Robin Hood was not an aristocrat, as he was later portrayed, but a simple yeoman driven to a life of crime by the harsh rule of the law of the rich. As such, it is easy to see how his story soon became a favourite folk tale among the poor.

There is, in the grounds of Kirklees Priory, an old gravestone, marking the final resting place of one "Robard Hude". Proof that part of the tale may be true? It would be nice to think so.