The Decorated Period (1280-1380) is the second phase of Gothic architecture in England (for a look at the beginnings of English Gothic see our article on the Early English period). Other common names used to refer to this period are Middle Pointed, Curvilinear, Geometric, and Flamboyant.

All these terms refer to the shape of window heads and window tracery, which became much more elaborate and, well, "decorated"! The shape of buildings did not change radically, rather the Decorated period was one of evolution, rather than revolution.

Widespread adoption of the flying buttress to distribute the load of walls and roof made possible the use of wider, taller windows, and with the increase in size came a corresponding increase in decorative elements in the window head. 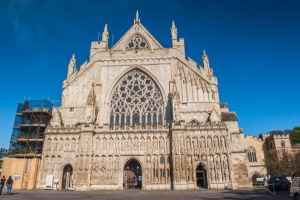 The simple geometric shapes of the Early English period gave way to complex curves; the ogee arch being the most obvious. The ogee combines a convex and a concave curve in the same arch. This double-curve is the basis of most of the curvilinear tracery which became so popular during the 14th century.

The vaulting of the Early English period became lighter, and short ribs sprouted from the main ribs to form star-shaped patterns that were as much ornamental as structural. The place where the ribs met became a focal point for decorative touches such as pendant knobs, grotesque faces, or foliage.

As with the preceding Early English period, carving in the Decorated period is focussed on foliage patterns, though the Decorated designs are more curvaceous than the Early English. A wider variety of leaves are used; with ivy, oak, rose, and vines leading the way. Animals, birds, and human figures are interspersed with foliage, and all the forms are more natural, less stiffly formal than Early English.

Other common ornamental carving features are the ball-flower (a partly opened flower set on a sphere within a hollow moulding) and the symmetrical four-leaved flower. Tombs and monuments within a church are frequently covered in foliage carvings. The evolution of the column continued, though no startling change of form occurs. Rather, the columns became more slender, and the free-standing shafts of the Early English period gave way to clusters of columns making up larger piers.

Decorated Gothic at a glance

Although stone was still the most popular building medium, certainly for churches and the houses of the well-to-do, brick made some inroads for the first time since the departure of the Romans.

These bricks were introduced from the Netherlands, where they were quite popular, and made the strongest impression in East Anglia, due to simple geographic proximity to the source. Bricks were used almost entirely for secular buildings, and even then their use was not widespread.

One noticeable facet of secular architecture is the growth of solidly built stone houses of the new class of prosperous merchant. Though not in the same class as the castle-homes of the great barons, more merchants were rich enough to build in less-perishable materials, and many of these merchant's houses have survived.

The Decorated period had little influence on castle architecture. Indeed, few castles are solely of this period. Many earlier castles were enlarged, with the addition of curtain walls, crenellations, and elaborate barbicans and gatehouses.

The keep ceased to be a major living space and was given over to use as a storehouse and prison. Instead, the 14th century sees the building of great halls, and a variety of more useful domestic structures within a complex series of outer defences.