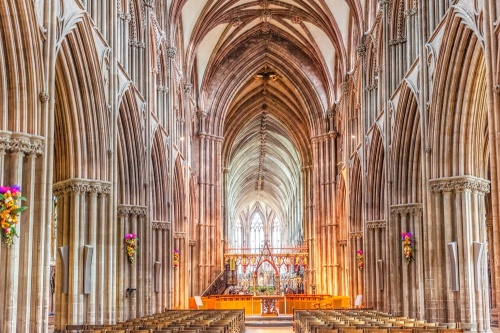 Lichfield Cathedral
Lichfield Cathedral's three towers, the "Ladies of the Vale", preside over a beautiful, though much restored, exterior. The cathedral suffered badly during the Civil War, being alternately besieged and used to house soldiers and horses. It has also suffered from being built of sandstone, which is wonderful material for carving the statues which festoon its west front, but not so good at preserving the final effects of the mason's art.

The cathedral stands within a lovely close, surrounded by picturesque historic buildings and separated from the bustle of the town beyond. It is, without a doubt, one of the most peaceful cathedral settings in Britain.

The church was built over the shrine of St Chad, a 7th-century bishop of Mercia, abbot of Lastingham, and Bishop of Northumbria. Chad and his brother Cedd were responsible for converting much of Mercia to Christianity. King Wulfhere of Mercia gave land at Lichfield for Chad to build a monastery dedicated to St Mary. Chad died in a plague in 672AD and was buried in his church of St Mary in Lichfield. The church was later incorporated into the cathedral structure. 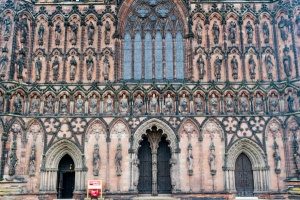 The cathedral has suffered from two sources; one human, one natural. Much of the medieval building was constructed out of soft sandstone, and the stone has not stood up to the passage of time.

Just as destructive were the depredations of Civil War soldiers for Lichfield was at the centre of heavy fighting during the conflict and troops from both the Royalist and Parliamentary sides alternately used it as a stable and a barracks.

As a result, hardly any of the statues that decorate the ornate west front are original. Those lovely towers, too, have had their share of trouble; the central tower collapsed in the 17th century and again in the 1740s. The flanking spires were both restored in the 19th century.

Your first view of the cathedral as you enter the close is the extraordinary west front. It looks more like an ornate stone screen than the exterior of a building. Other screen fronts like Wells have statues set within canopied niches, but here at Lichfield the statues project out from the stonework as if they are stepping forward to greet you. The effect is stunning.

The interior, though much restored by James Wyatt, and by the omnipresent George Gilbert Scott, is a symphony of Geometric Gothic style, a masterpiece of proportion and elegance.

Unusually for medieval architecture, we may know who was responsible for the design; it may have been designed and executed by William FitzThomas and Thomas Wallace, probably between 1265-1293. The result is exceptional and must rate as one of the high points of English medieval architecture. 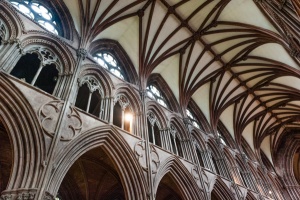 The clerestory and nave vaulting

Other interior highlights include the ornate memorial of Bishop Hackett (d. 1670), who was responsible for restoring the cathedral after the destruction of the Civil War period, and the octagonal chapter house, supported by a cluster of slender pillars that spread like the branches of a tree as they reach the ceiling.

The chapter house dates to the 1240s, and there is a wall painting of that period over the door.

Also within the chapter house is the 'Lichfield Angel', a 9th century carved limestone panel which once formed part of a shrine chest. Though we cannot know for certain, the Angel may have been part of St Chad's shrine. The quality of the carving is simply wonderful; it is easily one of the best examples of stone Saxon sculpture in England.

Another historic treasure housed n the Chapter House is St Chad's Gospels, an 8th century illuminated vellum manuscript. Formerly known as The Lichfield Gospels, the 236 individual folios are bound in book form. They contain the Gospels of Matthew and Mark and part of the Gospel of Luke. They were made around AD 730, possibly at Lindisfarne, but more likely right here in Lichfield.

The gospels are especially interesting for the margin notes, some of which are in Welsh, making this one of the earliest written examples of the Welsh language. 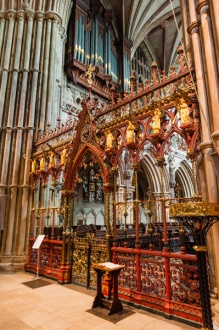 We know that there was originally a second volume of manuscripts, but this disappeared during the Civil War. Also on display are items from the Staffordshire Hoard; gold objects discovered buried in a field near Hammerwich. The Hoard makes up the largest collection of Saxon gold objects ever found in England.

Linking the chapter house to the north quire aisle is an unusual Pedalavium; a vestibule area for ceremonial feet washing.

The Lady Chapel is another highlight; designed in 1320 as a separate church, at an angle to the main body of the church, with 16th-century glass brought here from the abbey of Herckenrode in Belgium.

Immediately before the Lady Chapel entrance stands the site of St Chad's shrine. We do not know where the original shrine stood, but for the 2 centuries preceding the Reformation the shrine was in this spot.

The north quire aisle has a wonderful collection of carved heads. Many of them show obvious sword damage from the Civil War; a sobering reminder of that violent conflict in otherwise peaceful surroundings.

To the south of the Quire is the Consistory Court; where legal matters were settled. Above the court and reached by a narrow stair, is St Chad's Head Chapel. The saint's bones were kept here until the Reformation. His skull was shown to pilgrims gathered below from a balcony outside the chapel. The skull and the rest of Chad's relics were dispersed in the 1540s.

This is an awe-inspiring chamber; perhaps because it is so small and set off from the main body of the church, but it has an unmistakable aura, a sense of age and mystery. Traces of medieval wall painting cling to the vaulted walls.

Lichfield Cathedral is a gem, a wonderful example of medieval architecture and a building simply bursting with historic interest. 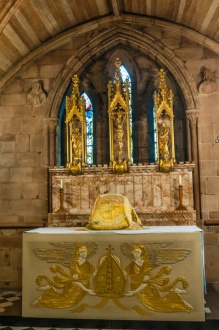 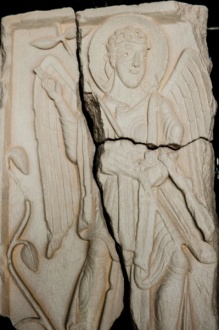 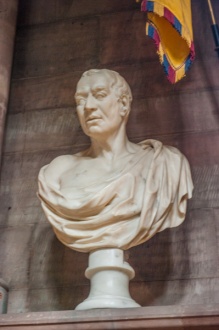 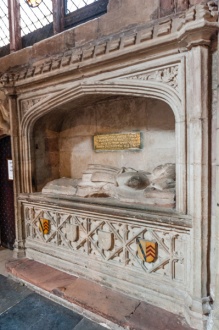 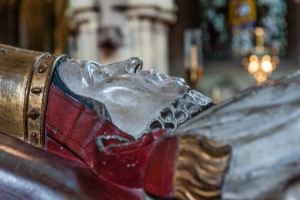 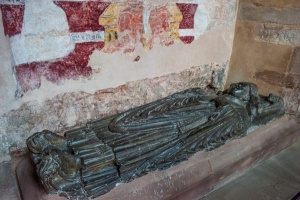 More self catering near Lichfield Cathedral >>