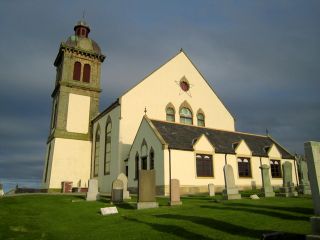 Doune Church
This 19th-century church is notable for its striking clock tower with only 3 of the 4 sides having faces. The church stands in an elevated position overlooking Banff Bay and is also known as Macduff parish church.
History
The first church here was built in 1805 beside the town cross, erected by the 2nd Earl of Fife 22 years earlier. Before 1768 worshippers had to walk 8 miles to Gamrie each Sunday. Then a school house in town was furnished as a chapel, but the growing congregation meant that a new building was needed.

The Earl supported the effort to build a new church and even donated an organ to be used in the completed building. Unfortunately for the Earl's good intentions, Presbyterian worship at that time did not look kindly on organs and music, so the organ sat in storage for years until it was given to the nearest Catholic church. That first church was a Chapel of Ease for Gamrie, but by the late 19th century Macduff needed its own church. In 1865, the church was enlarged, this time with the 4th Earl contributing half the cost.

This remodelling gave the church its current look. At the same time, Macduff became a parish in its own right. The striking tower was topped with a cupola and lead-domed roof. A clock was installed in the tower at that time, but it is not the church clock, but the town clock, and is owned by the Burgh. The oak communion table was donated in 1895 along with the alabaster font.

A pair of stained glass windows by the City Glass Company of Glasgow were installed in 1922 as a memorial to those who fell in the First World War. The right-hand window, known as 'The Children's Window', is an excellent example of early 20th-century glass and was exhibited at the Royal Academy in London.

More self catering near Doune Church >> This detached cottage is located in the village of Macduff near Banff and can sleep two people in one bedroom.
Sleeps 2