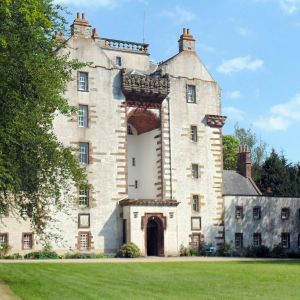 Craigston Castle
Craigston Castle is a traditional Scottish tower house, built in 1607, with an ornate balcony. The interiors are largely original, decorated with portraits of Scottish kings.
History
The castle was built by John Urquhart of Craigfintry, who personally supervised some of the building design. The castle is built of local Turriff sandstone, with a pair of wings linked by a high arch, above which is castle's most striking feature, a corbelled parapet decorated with ornate Gothic carvings. One curious thing is that there are no corner turrets, though there are obvious bases at the top of each wing.

The Urquhart family were forced to sell the castle when they ran into financial trouble, but Captain John Urquhart was able to buy it back in the early 18th century. Captain John made his fortune as a privateer, which was a perfectly respectable occupation at the time, and for this reason, he is known as 'The Pirate'.

In 1733 Captain Urquhart made the first major alterations when he brought in architect William Adam (father of the more famous Robert Adam) to design the wings and lay out the grounds. It took more than a century for the next major change; when John Smith, more famous for his design of Balmoral Castle, was called in to create a grand new entrance.

The interior features much original 17th and 18th-century furnishings, including carvings depicting Biblical scenes. There are 2 stone-built spiral stairs leading from the main ground floor reception rooms to bedrooms on the floors above. Perhaps the most intriguing bedroom is The King's Room, so-named because family legend says that a number of monarchs have slept here - though no one knows which ones! Another is the Fraser Room, named because it was used frequently by the Frasers of Castle Fraser, who visited often. Another bedroom is The White Room, filled with Heppelwhite furniture including a four-poster bed.

The Urquhart family still own Craigston, so it is not surprising that Urquhart heraldic symbols abound throughout the interiors.

Craigston Castle is still lived in by the Urquhart family and is open primarily as a wedding venue and for exclusive group accommodation.

More self catering near Craigston Castle >> 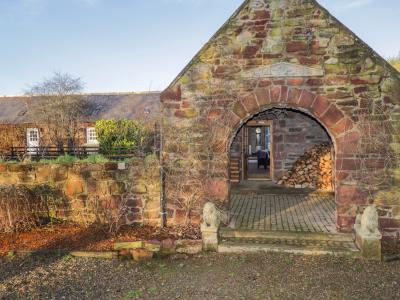 This chocolate-box property is located on the outskirts of Turriff, Scotland and can sleep two people in one bedroom.
Sleeps 2 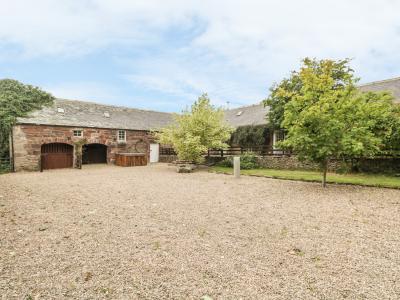 This attached barn conversion rests close to the Scottish town of Turriff and can sleep four people across two bedrooms.
Sleeps 4