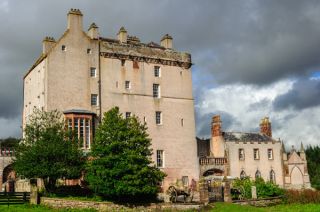 Delgatie Castle is a lovely 11th-century fortress that has been the home of the Hay Clan for much of the last 650 years. The highlights of the castle are the fabulously painted late 16th century ceilings and a bedchamber slept in by Mary, Queen of Scots when she stayed here for three days in 1562.
The earliest castle at Delgatie was built sometime around 1030, and the main tower dates to about 1100, but the fairy tale fortress we can see today is largely the result of rebuilding in the late 16th century. To this was added a pair of wings in the mid 18th century.

After the Battle of Bannockburn in 1314 Delgatie was taken from the Earl of Buchan and granted to the Hay family, who have owned Delgatie for the past 650 years.

Another major feature is the turnpike stair, built into the thickness of the walls and reaching from the ground floor to the top of the building. At over 5 feet wide this stair is thought to be the widest in the country.

You can see the room where Mary, Queen of Scots stayed when she visited Delgatie in 1562 following the Battle of Corrichie. It is actually quite a small chamber; I wonder how she felt when she was shown to her quarters?

The Hay family were Catholic sympathisers during the Reformation, and almost certainly maintained a family priest at Delgatie. But to maintain a priest openly was a foolhardy act, so secret chambers had to be built for the priest to hide in. All well and good, but what do you do when the priest dies? At Delgattie, the answer was that you block up the priest's hole with the priest's body inside. Presumably, the smell wasn't too pleasant for a time, but over the years that would have faded, and the secret stayed, well, a secret. It was not until the house was being restored that workmen found the body of the priest, literally walled up in his tomb.

One of the most interesting features of Delgatie Castle is that all the rooms are small, at least by comparison with large castles or stately homes. There are no grand ballrooms of double-cube dining rooms here. And that's rather good, for it means that Delgatie retains much of its original medieval character.

Another interesting feature is that the placards with information about the rooms on view are all written in the voice of the previous owner, Captain Hay, which helps give Delgatie a very personal and personable feel as if you are a welcome family guest and you are being shown around the house by the owner. The castle is set in lovely parkland, and there are woodland walks throughout the estate.

If you fancy a nibble in the tearoom, you're in good luck, for Delgattie has won a national award for quality home baking. 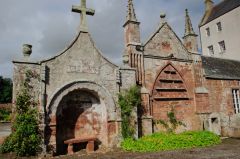 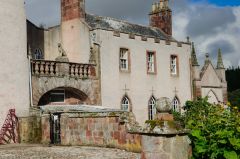 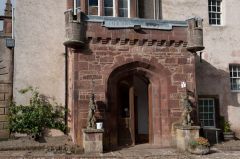 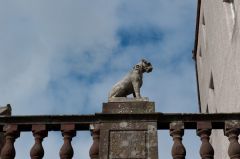 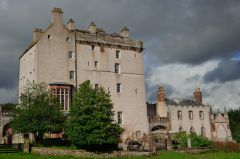 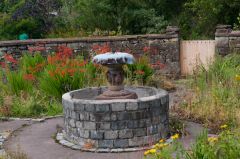 More self catering near Delgatie Castle >>