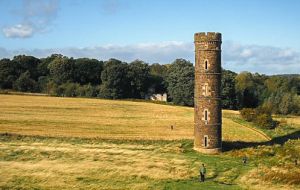 Cammo Tower
Cammo Tower is a striking 4-storey round tower topped with a parapet, built in the early 19th century to supply water to nearby Cammo House and to act as a focal point for one of Scotland's earliest landscape gardens.

The Cammo Estate has been called Edinburgh's Secret Gem. In 1693 Cammo House was built for John Menzies, and the house is thought to be the inspiration for House of Shaws in Robert Louis Stevenson's 1886 novel Kidnapped.

The surrounding park was laid out in 1710 by Sir John Clerk of Penicuik. Sir John was a polymath, interested in music, poetry, and landscaping. He wanted to create a landscape garden centred on Cammo House, with radiating paths, avenues, and formal gardens. Sir John also planted many of the trees which help give Cammo Park its character. Among the trees planted by Penicuik is the oldest ash in the city of Edinburgh.

In the 19th century, the landscape changed enormously, with a walled kitchen garden, a long ornamental canal, and a ha-ha. It may be hard to imagine it when you stand at Cammo Tower today, but the tower once looked out over a carefully designed landscape suited to a luxurious mansion.

The house was left to the National Trust for Scotland in 1975 but after repeated arson attacks by vandals it was declared unsafe and most of the structure was pulled down. The estate parkland was given to the Edinburgh Council who maintain it as a wilderness park.

Though little remains of the house itself, one reminder of Cammo House still remains; the early 19th-century water tower built to supply fresh water to the house, a quarter mile away. The round tower stands 4 stories high, with a castellated top with high parapets. A string course separates each stage of the tower, and there are 4 blocked entrances at each level. and a ground floor entrance on the south west side.

The tower stands like a solitary sentinel in a field, watching over the ruins of the once-grand house among the trees. It looks like they prototypical folly, but it had a very practical purpose! Curiously, the tower was powered by the wind, like a windmill, using sails to transfer water. It almost certainly was designed as a focal point for vistas from the house and the surrounding gardens.

We do not know exactly when the tower was built; the most likely date is 'early 19th century' which isn't terribly precise. It was probably part of a grand building scheme begun by James Watson, which included a stable block to the north of the tower and a rear wing to the main house.

The tower is usually locked but the estate is a public park, accessed at the end of Cammo Road.

More self catering near Cammo Tower >>