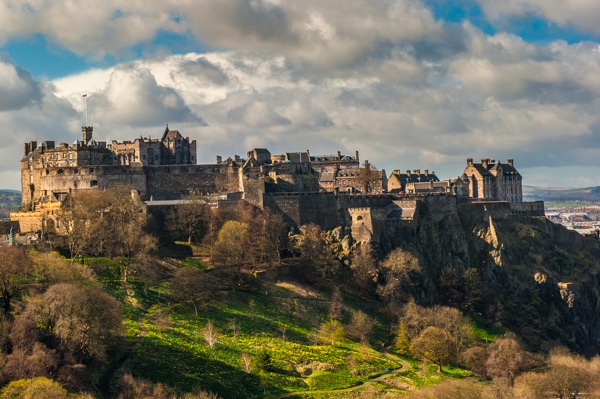 The lowlands around Edinburgh and the Firth of Forth have been called 'The Cradle of Scotland'. The River Forth and its broad estuary seems to cut lowland Scotland in two. North of the estuary lies the Kingdom of Fife, while to the south lies Lothian, centred on the historic city of Edinburgh.

Edinburgh has been the capital of Scotland for 500 years - though not always its largest or most economically important city. The city is built on a high outcrop of rock, on which stands the fortress of Edinburgh Castle. Though the castle today is perhaps best-known today for its annual military tattoo, it is one of the most historic castles in Europe. The castle stands at one end of the Royal Mile, stretching through the city's Old Town, past St Giles Cathedral, where the Scottish Reformation took flight.

The Royal Mile ends at the gates of the Palace of Holyroodhouse, the monarch's official residence in Scotland. Beside the Palace stand the roofless ruins of Holyrood Abbey. A short walk from the Royal Mile is New Town, a Georgian extension to the old city core, with elegant 18th-century squares of terraced houses, including Georgian House, a restored 18th-century townhouse now owned by the National Trust for Scotland. 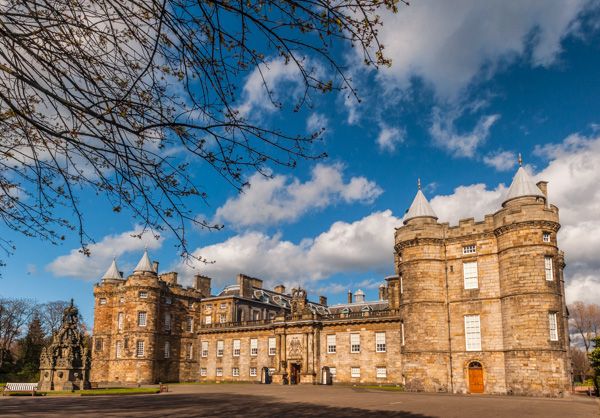 The Palace of Holyrood House

Though Edinburgh is understandably the most visited historic site in Lothian, there is much, much to see. There are numerous stately homes on the city outskirts, including Lennoxlove, near Haddington, Newliston, and the National Trust for Scotland's House of the Binns. From the House of the Binns, you can look down to the Firth of Forth and see the imposing outline of Blackness Castle, jutting like the prow of a ship into the waters of the Firth.

In an area with several large urban areas, it is a delight to find medieval treasures like Dirleton Castle, Hailes Castle, and perhaps the most impressive fortress of all, Tantallon Castle, home of the Red Douglas clan. Tantallon stands on the edge of a high cliff, looking out towards Bass Rock, and internationally important nature sanctuary. You can take boat trips to Bass Rock from the National Sealife Centre at North Berwick.

A short distance away is Athelstaneford, where the Scottish saltire - with its striking white diagonal cross on a blue field - was first used during a 9th-century battle between the native Picts and an invading army of Angles from Northumbria. The National Flag Heritage Centre tells the story of the saltire and its history. The museum is housed in a historic 16th-century doocot near the medieval parish church. 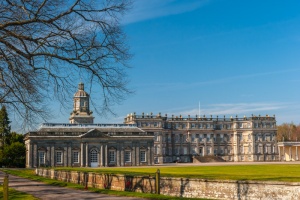 At Musselburgh, just east of Edinburgh, is Inveresk Lodge Gardens, an oasis of calm hidden behind high walls. Also on the edge of Musselburgh is Newhailes, a magnificent Palladian stately home known for its superb rococo interiors, featuring Chinese wallpaper.

If you prefer your history with an ancient feel, Lothian has plenty to offer. At Cairnpapple Hill, near Torpichen, you can descend inside an ancient burial mound, and when you are finished, make your way into the village to visit the Torpichen Preceptory, an early medieval church, the only known example of a church built by the Knights Hospitaller in Scotland. On the subject of historic churches, probably the most visited church in Lothian is Rosslyn Chapel, made popular in the book 'The Da Vinci Code', and known for its astonishing medieval carving.

Lothian is also blessed with Roman remains, for several sections of the Antonine Wall have survived. There are several sections near Falkirk, including perhaps the best surviving section of the wall at Watling Lodge.

If I was pressed to name my favourite historic sites in Lothian, it would be a hard choice, but I'd probably opt for:

While in Edinburgh, there are the obvious choices of Edinburgh Castle, Holyrood Palace, and St Giles Cathedral, but to those 'name' attractions I'd add John Knox's House, Calton Hill folly group, Sir Walter Scott Memorial, and the medieval townhouse of Gladstone's Land.

This is just a taste of what Lothian has to offer. For more see the menu on this page. And for accommodation, see our list of self-catering cottages, hotels, or Bed and Breakfasts across Lothian.