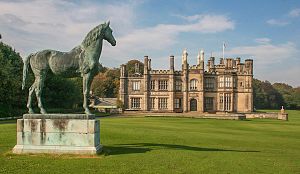 Dalmeny House
Dalmeny is the home of the Earls of Rosebery. The house, built in 1815 in Tudor-Gothic style, is full of art treasures - tapestries, 18th-century French furniture, and portraits by Gainsborough, Reynolds, and Raeburn. The Napoleon room houses a collection of furniture, paintings and memorabilia related to Napoleon.
History
The estate at Dalmeny goes back to at least the 13th century when it was in the hands of the Mowbray family. The Mowbrays built Barnougle Castle as their main residence. In 1662 the estate was purchased by Sir Archibald Primrose and the Primrose family still own Dalmeny today.

House Plans
Sir Archibald's son was named the 1st Earl of Rosebery in 1703, but it was not until the 3rd Earl inherited that plans were drawn up for a new, fashionable house at Barnbougle. Like many late 18th century nobles, the Earl called upon Palladian master architect Robert Adam to design a new house.

Adam's plans were never implemented, and in 1788 the Earl asked Robert Burn for a design. again, these plans were never built. The 3rd Earl's son, another Archibald, asked both William Atkinson and William Burn to provide plans for a new house, but still nothing was done to actually build a house.

It was only when Archibald became 4th Earl in 1814 that he moved ahead to replace the old house. He called on Jeffrey Wyatt to produce a new design replicated the romance of the Tudor period. The Earl liked Wyatt's design, but yet again delayed, and called on his friend William Wilkins, to produce yet another design in Tudor style.

The house was finally built in 1817 and was loosely modelled on the Tudor manor house at East Barsham, Norfolk. Dalmeny House is famously the first house in Scotland to be built in the Tudor Revival style.

While the house plans stuttered and stalled, the gardens were being developed. Beginning in 1812 Thomas White Jnr. laid out landscape gardens around the house site.

House Interiors
Curiously, though the house exterior is decidedly 16th century Tudor in style, the interiors are pure Regency, save for one notable exception. That exception is the hall, which has a striking hammer-beam roof. There are 16th and 17th-century Scottish furniture, and a collection of porcelain.

The fine art and furniture come from two sources; items collected by the Primrose family over the centuries and items that came into the family when the 5th Earl married Hannah de Rothschild, of the famous Rothschild banking family, in 1878. Hannah brought with her a wealth of paintings and porcelain dating from the 16th-18th century.

There is more than fine art to see; look for a sea chest owned by Captain Cook, an 18th-century mechanical dice game, a rather bizarre Covenanter's Execution Knife, measuring a full metre long, a 1580 snuff container given by James I and VI to a tavern, and porcelain flowers given by Madame de Pompadour to Louis XV.

Napoleon at Dalmeny
Perhaps the most unexpected interior highlight is a collection of Napoleonic objects collected by the 5th Earl. This is perhaps the largest and most important Napoleonic collection outside France and includes the chair and desk the Emperor used while in exile on St Helena, his shaving stand, and perhaps most poignant of all, the pillow on which his head lay after his death in 1827.

Other items include the throne used by Napoleon in his role as First Consul and portraits of the Buonaparte family by leading French artists including David and Appiani. The 5th Earl was fascinated by Napoleon and wrote a biography that is still a standard academic text on the last years of Napoleon's life.

Dalmeny is still a private residence, but is open regularly during the summer months, with guided tours of the house. It is also available for hire for weddings and corporate events.

More self catering near Dalmeny House >>

This lower-ground floor apartment lies in the town of South Queensferry, Scotland and can sleep four people in two bedrooms.
Sleeps 4